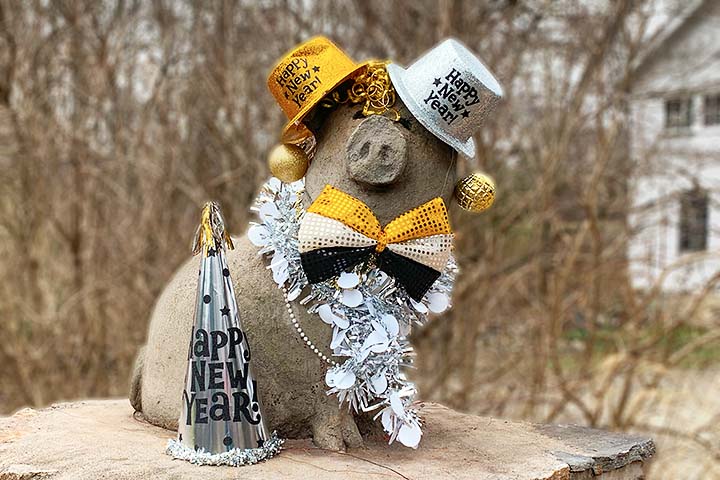 January 2, 2019 — The year began in JANUARY, as it almost always does. It kicked off with a decision by the newly-seated Board of Selectmen to let voters decide whether a portion of town-owned land should be used for a dog park.

On January 11, the town’s long-time print newspaper, the Weston Forum, stopped publishing and was absorbed into a new entity called the Aspetuck News. 20 days later, Weston Today, a new, fresh, vibrant online newspaper was launched. This is generally considered one of the major events in the town’s history.

Right away, Weston Today got its first major scoop, reporting Westport’s announcement of a big increase in beach emblem fees for Weston residents and an even bigger one for other towns. Appeals by the First Selectman and Town Clerk to reduce the increase, especially for seniors, were rebuffed. A proposal to invade by sea was rejected due to the presence of cannons at Compo Beach.

FEBRUARY opened with a new installment of the long-running League of Women Voters Speak Up event. Almost every town official attended along with Weston’s state representatives. The public asked questions and stated views about town amenities, environmental concerns, the education budget, the new federal tax law, the state budget crisis, and the dog park. 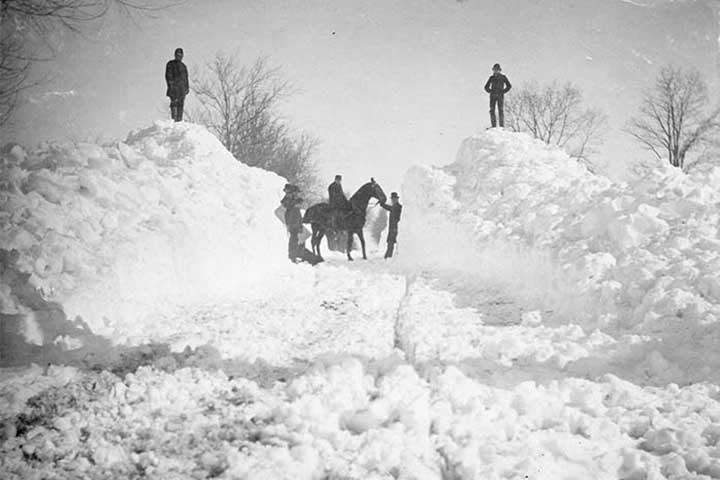 In MARCH, Mother Nature punished the town for even thinking about a dog park with mountains of snow and extended power outages. It wasn’t as bad as the blizzard of 1888 but, surprisingly, that was scant comfort for Westontonians whose memories of the 19th century have faded.

Students walked out after the most recent mass school shooting, in Parkland, Florida, made it clear that unspeakable tragedies would not stop on their own. Ten days later, many from Weston joined millions around the country in a March for Our Lives.

Voters were busy in April, defying Mother Nature by approving the dog park proposal, staying away in droves from the Annual Town Budget Meeting, but approving the budgets in the referendum.

The month ended with volunteers from Kiwanis, the Boy Scouts, Girl Scouts, and many others taking to the streets to GreenUp Weston for spring. 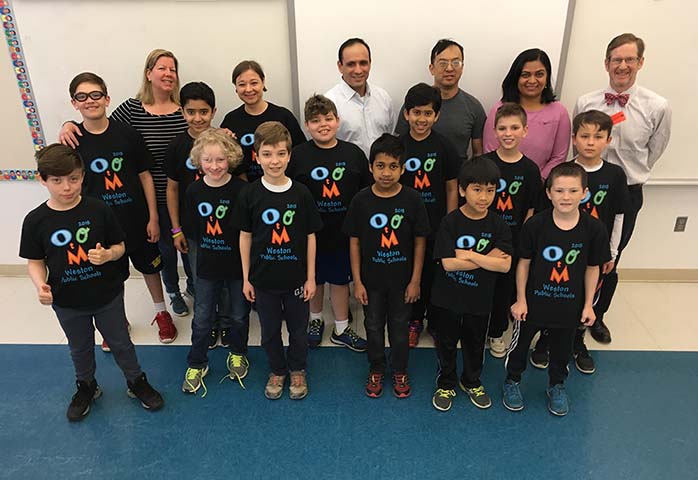 In MAY, Weston Intermediate School students reached the Odyssey of the Mind world finals, EMS put up a huge amount of money to help the Town build quarters for its crews, funds were allocated to beef up school security, and Weston Today began a series of investigative reports on other towns that have stolen our name, starting with Weston, Wisconsin.

We interviewed First Selectman Spaulding in depth and later presented his update on the Board’s progress at mid-year. The month ended with the return of the Lachat Farmer’s Market.

JULY saw artists like Otis and the Hurricanes and P.J. Pacifico performing at Weston Historical Society’s terrific Music at the Barn concerts, all connected to the Society’s equally terrific Life in the Sixties exhibition. 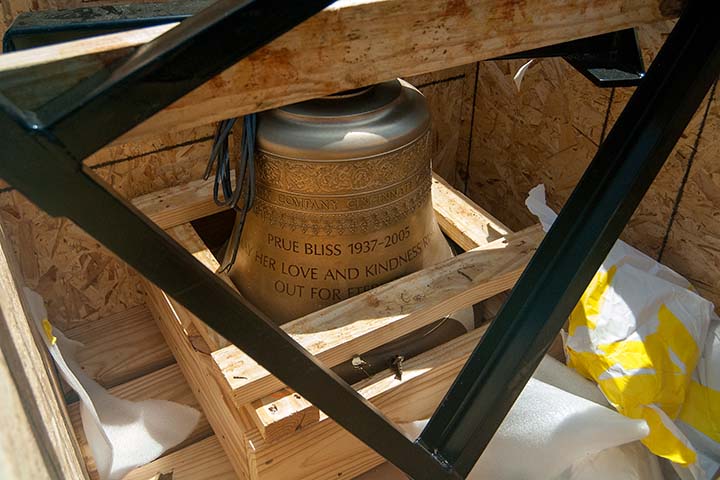 At two charming events, voters at a Special Town Meeting showed Lachat Town Farm some love by unanimously approving a lease for a resident farm manager, and bells were restored at Norfield Congregational Church in memory of Prue Bliss.

In AUGUST, everyone left town. Except us, the police, fire, and EMS. They all trained for a school emergency situation, and we reported.

We also took advantage of the quiet to continue our investigative series, this time visiting (sort of) Weston, Nebraska. And then Hartford surprised everyone by giving Weston nearly $400 thousand to build sidewalks.

In SEPTEMBER, everyone was back, making up for lost time. A Valley Forge Road walk was enjoyed by all. Bobcats appeared (harmlessly) and so did coyotes (harmfully). A Sportsperson of the Year was named and the Kiwanis Dog Jamboree was a big success.

The Historical Society ran a very popular extravaganza called Westonstock, and we shared the stories of two residents who were at the original Woodstock festival. Then the Friends of the Weston Library got a big gift from the generous estate of the late Daniel Offutt.

In OCTOBER, the Board of Selectmen voted a new ordinance to ban plastic checkout bags in Weston retail stores, we reported on a talk by a State budget expert on Connecticut’s dire fiscal straits, and the First Selectman unveiled preliminary plans to greatly improve Weston’s public safety capabilities.

On October 11, the Aspetuck News, which by then appeared in Weston with the old Weston Forum masthead, ceased publication. The silver lining in that undeniably grey cloud is that Margaret Wirtenberg joined us, bringing her About Town column and a wealth of knowledge. We are a better paper as a result.

In NOVEMBER, we interviewed state legislature candidates, reported on bears at Trout Brook, and relayed advice from Animal Control about how to keep bears from paying you a visit. The Town launched the citizen survey first discussed at February’s Speak Up.

And we suffered some tragic losses. 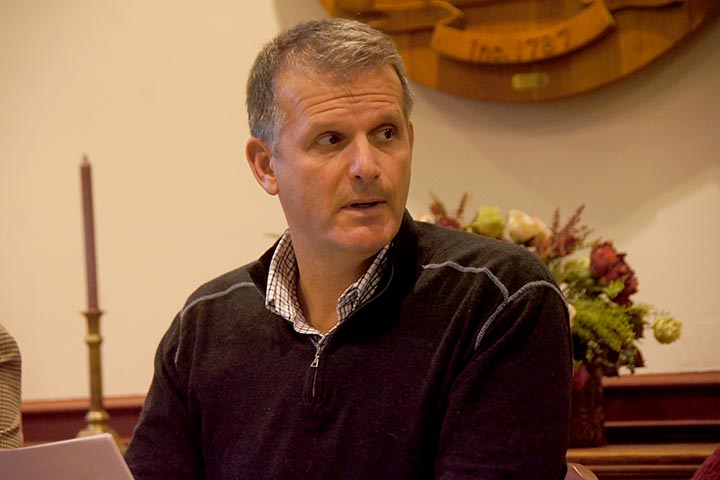 For too many families, the season of thanks turned into a season of sorrow, and our thoughts and prayers still go out to all of them. Among those lost was Selectman Brian Gordon, who battled cancer much of the year, and then succumbed.

We did not know Brian well enough to pen one of the many tributes sent to us for publication. But we knew him a bit, and liked him immensely. At Board meetings, Brian usually said little. One-on-one, just the opposite. In our conversations, he was passionate about what he saw as best for our town, extremely candid, and impressively knowledgeable. He was also funny as hell. We will always regret not having the chance to know him better.

DECEMBER brought better news. A group of Weston baseball volunteers pitched in to help disadvantaged kids. The Daniel Offutt estate’s generosity was again evident with the gift of an ambulance. Weston High School students showed their environmental colors by engaging in the Green LEAF program, and the town survey — a key priority of Mr. Gordon’s — concluded with an “amazing” level of participation.

A new Selectman was sworn in, along with a new member of the Board of Education and two new members of the Board of Finance. Three students also stepped up to serve their peers and the town. A State grant was awarded to improve the Library’s children’s room, and first steps were taken to possibly conserve even more open space in town.

It has been an honor, a pleasure, and great fun to bring you all this news for the past eleven months. We can’t wait to see what happens next. Thanks for reading Weston Today.