Cats! (Not the Musical) 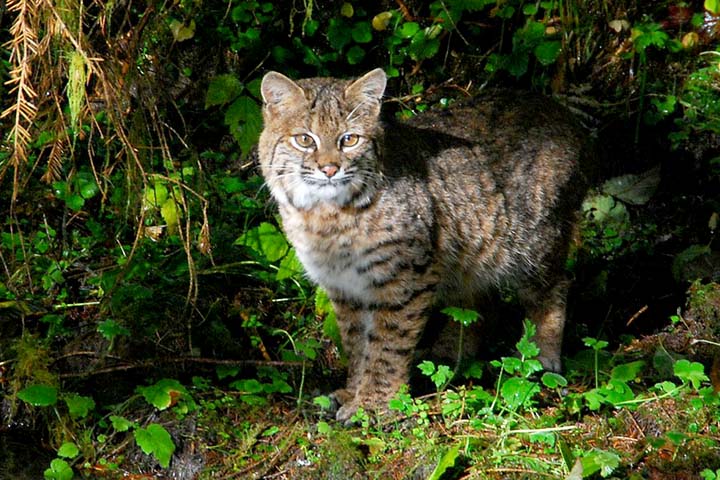 September 4, 2018 — A certain amount of anxiety arose last week when a bobcat was spotted in thick brush behind Norfield Church and then near Weston Middle School early in the morning. Such sightings are not particularly rare, as Connecticut's bobcat population appears to be rising. This particular animal, however, was a bit more bold than usual. (It is not clear that all sightings were the same animal.)

School officials took a cautious approach and limited outside activities, which had already been curtailed due to excessive heat.

First, the thicket between the library and the playground at Hurlbutt Elementary School East House has been trimmed, as bobcats tend to hunt and travel in areas of dense cover. Growth near the Norfield pre-school playground will also be cut back.

Second, field cameras are being set up to monitor animal activity in the area and determine how much time the bobcat spends in the vicinity. Male bobcats typically wander a 10 to 20 mile radius. Females cover a much smaller territory, usually around four miles. If the cameras reveal the animal is a lactating female with kittens, that would influence whether and how it is dealt with.

Third, Mr. Harper and police Captain Matt Brodacki are in discussions with DEEP about live-trapping the animal and potentially placing a tracking collar. The bobcat could possibly be relocated, although that is unlikely if it is in fact a lactating female. Weston Police will also be present at the schools during drop off and pick up as the situation resolves.

According to Dr. Spaulding, bobcats are not aggressive and, assuming they are not rabid, do not attack people. We learned from DEEP that bobcat attacks on humans are extremely rare, and it is also quite rare for a bobcat to have rabies.

The First Selectman also said that, while bobcats "are beautiful creatures, we don't want them to become too comfortable being right next to us." Despite being naturally inclined to stay in cover and be active usually only after dusk and just before dawn, it is not uncommon for bobcats to habituate themselves to a particular area and its activities, including those of humans.

A Few Facts about Bobcats

Bobcats nearly disappeared from Connecticut decades ago. At one time, there was a bounty on them. But they are now legally protected, and cannot be hunted or trapped.

They look like really big domestic cats. Males normally weigh between 18 and 30 pounds and measure around 35 inches in length. Females are slightly smaller. They typically eat rabbits, woodchucks, squirrels, chipmunks, mice, birds, and yes, domestic cats. But much about their diet and the number of them in Connecticut is unknown. You may be able to help DEEP learn more.

If You See One

If you come across a road-killed bobcat, DEEP urges you to call the Wildlife Division at (860) 424-3011. Scientists learn from examining the stomach contents of such animals.

Also, if you happen to find what you believe is a GPS collar, DEEP would be very happy if you call (860) 424-3045. GPS collars were placed on 50 bobcats to collect data. They were programmed to automatically fall off on August 1. They still transmit data, but not all of them have been recovered. Retrieving them is extremely useful.

You can also help DEEP by reporting sightings online. You can send location information and photos by email to deep.ctwildlife@ct.gov. You can also visit the organization's Facebook page.

Finally, you can use the iNaturalist website, where you can report a sighting and find information and photos about others. A free smartphone version is also available.