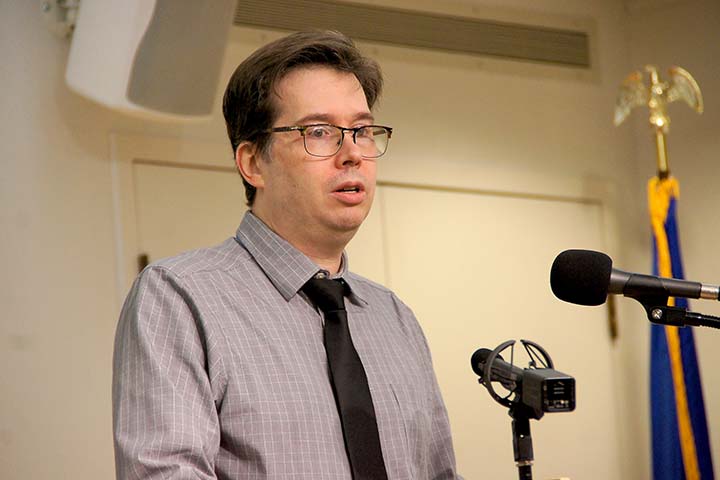 October 9, 2018 — The state of Connecticut is in fiscal crisis, and the core of the problem is a decades-long unwillingness to fund pension and retirement health care costs for state employees and municipal teachers.

The result is an enormous, swelling budget deficit that is likely to persist, and a shrinking set of options to deal with it. The impact on Weston could be significant.

These were key takeaways from a talk by CT Mirror’s Keith Phaneuf at an eye-opening League of Women Voters event on September 29 at the Weston Public Library. A video of the presentation by Mr. Phaneuf, an expert on the State budget, is available on YouTube.

Current projections peg next year’s State budget deficit at $2 billion, and show it growing by $500 million to $600 million each year after that. A large part of the gap is due to annual pension contributions, which will increase rapidly for at least the next 15 years as the State pays benefits for a large group of retirees without having set aside funds to do so.

According to Mr. Phaneuf, between 1939 and 1971 a series of governors and legislatures saved nothing to pay for promised contractual retirement benefits. After that, they saved far less than what was needed, routinely raided retirement funds, and missed the opportunity to achieve millions of dollars in returns on investments.

As a result, fully one third of the State’s current annual budget consists of costs for teachers and state employees pensions, health care for retirees, and payments for other bonded debts. Those costs are rising 10 percent a year. Many analysts believe that, by the mid 2020s, they will consume half of the budget.

This raises the question of how the State will pay.

Mr. Phaneuf dismissed a potential solution that is often espoused by political candidates from both parties: renegotiate union contracts.

The sobering math is that 85 percent of current State contributions to employee and teacher pension systems cover people who are already retired. Mr. Phaneuf could not imagine a scenario where those contractual obligations could be reduced or eliminated ex post facto or by the stroke of an executive pen.

He acknowledged that such steps would not hurt: they would reduce the much smaller amount that needs to be set aside for the retirement of current employees. But he said such measures would do nothing about the larger, more pressing problem. He likened it to having four feet of water in your basement and tackling the problem with a sponge.

As for the prospect of higher taxes, Mr. Phaneuf said “Welcome to the land of 'you may not have a choice.'” He acknowledged that income tax revenues have grown recently, but that a large portion of the growth is a result of boom times in the financial services sector. Those funds may help reduce the growth in the budget deficit, but won’t reduce the deficit itself. And, historically, as financial markets cool, those revenues disappear.

This leaves spending cuts, where the State is in the position of having less and less room to make reductions.

Funding for public colleges and universities, where tuition has already risen at least 30 percent since 2010, could be a target. So could social services and non-Medicaid programs.

And then there is municipal aid, which Mr. Phaneuf described as once being a sacred cow. Not any more.

The Impact on Weston

In July, Weston’s Finance Director Rick Darling announced to the Board of Finance that the town had received $334,000 in Education Cost Sharing and Municipal Stabilization grants.

After a budget season when it appeared the State might force the town to pick up as much as two million dollars of teacher pensions costs and virtually eliminate all aid, Weston’s budget had been conservative and anticipated nothing. So the $334,000 was a pleasant surprise. But as Mr. Darling also said, as recently as four years ago, Weston had received $1.5 million from Hartford.

The League of Women Voters event was well attended. A number of former and current officials were present, including State Senator Tony Hwang, State Representative Adam Dunsby, and State Senate candidate Will Haskell. Board of Finance chairman Steve Ezzes was there, so we asked for his views about the State fiscal crisis and how it might affect Weston financially.

“I knew Connecticut had an upcoming budget deficit of around $2 billion,” said Mr. Ezzes, “but I expected it would decline over time. It was a surprise to hear that it may be more permanent, and that the chunk for retirees is so large. It’s clear that the idea of taking back from the unions may be a nice idea, but won’t solve the problem.”

After Mr. Phaneuf’s presentation, Mr. Ezzes sent an email to his colleagues on the Board of Finance and to the members of the Board of Selectmen, Board of Education, and Board of Police Commissioners. He recommended that they watch the video of Mr. Phaneuf’s talk.

“The State’s fiscal situation is serious,” he said, “regardless of who is elected governor.” He advised planning for no State aid in the immediate future, and again expressed surprise that Weston received anything this year.

“We always have to manage our finances well,” said Mr. Ezzes, “and it’s now more clear than ever that we have to live within our means.”