Be Bear Aware at Trout Brook, Learn on the 14th 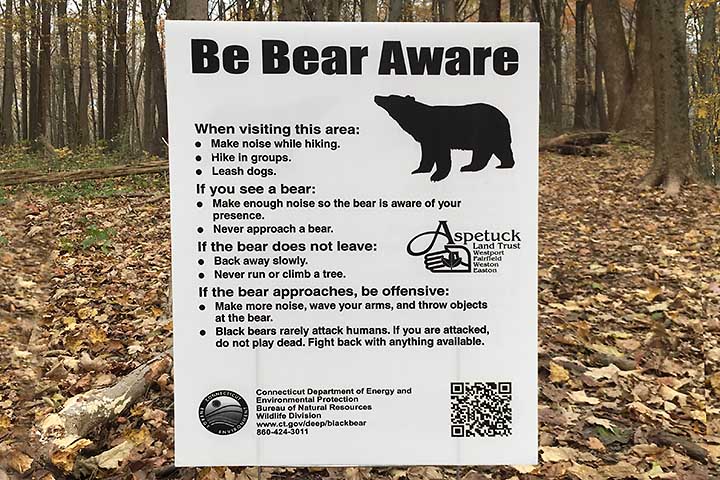 November 6, 2018 — A growing number of black bears have been spotted at Trout Brook, prompting the Aspetuck Land Trust (ALT) to post signs around the preserve advising you what to do if you encounter one.

So far, there have been no incidents, but ALT’s executive director, David Brant, advises caution. “Black bears typically fear humans and flee when they are known to be near but there can always be exceptions. With wild animals we need to err on the side of caution. The way people behave can determine much about how bears behave.”

ALT is putting on a special talk on Wednesday, November 14 about why we are seeing more and more black bears, bobcats and other animals. The speaker is Dr. Tracy Rittenhouse, who is an associate professor in the Department of Natural Resources and the Environment at the University of Connecticut.

Dr. Rittenhouse’s talk starts at 7:30 pm on the 14th at Westport’s Unitarian Church, 10 Lyons Plains Road. Admission is free to members of Aspetuck Land Trust. There is a $5 suggested donation for non-members. A dessert reception will follow. Seating is limited, so if you plan to attend, RSVP by email or call (203) 260-4737.

Dr. Rittenhouse says her research indicates there are as many as 700 individual bears — adults and cubs — currently living in Connecticut.

“Back in the late 1800s, almost all forest in Connecticut had been logged and removed for agriculture, fuel and construction. Large mammals, such as deer, bear, and bobcat became rare here. Over the last 100 or so years, there has been significant forest regrowth in Connecticut and strong laws regulating hunting. Consequently, today we have an enhanced habitat for large animals,” according to Dr. Rittenhouse.