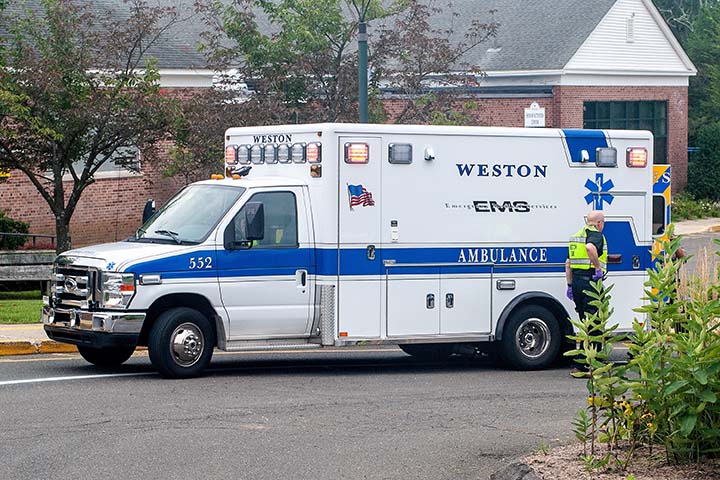 October 22, 2018 — On Thursday evening, October 18, in a joint meeting of the Board of Selectmen and Board of Finance, First Selectman Chris Spaulding discussed preliminary plans to address long-needed improvements in Weston's public safety capabilities.

This is the first of a three-part report. It presents an overview of the project and the portion involving the firehouse and EMS quarters. Part 2 reports on dispatch, communications, and Police Department needs. Part 3 is about where the funding would come from.

Project plans are in the early stages of development. The cost estimates in this article are also very preliminary, and we understand they err on the high side. But lower final numbers would still represent a significant investment.

The working estimates involve a total spend of around $5 million. Just over $1 million is already available. EMS has pledged a donation of $750 thousand, and the current budget sets aside over $250 thousand to replace the firehouse roof.

The Town has sufficient funds in reserve to pay the remaining estimated $4 million, so there would be no impact on the mill rate.

According to Dr. Spaulding, the plan comes about due to heightened concerns that Weston's safety facilities and equipment have degraded to an extent that the town is increasingly exposed to liability and the public is increasingly at risk.

None of the problems are new. It appears one reason the Town's reserves have been allowed to swell over recent years is a common understanding that the time would come when solutions could no longer be delayed.

This is not the first attempt by an administration to formulate an approach. An ambitious 2014 plan which iincluded constructing a separate facility won virtually no support. A limited proposal two years ago for close to $6 million withered and died. The needs didn't.

EMS and Firehouse No. 1

The good fiscal news of this project is that, of the possible $1.3 million needed to renovate and expand the main firehouse, EMS is willing to pay more than half.

Like the Fire Department, EMS is an all-volunteer service. It operates as a 501(c)(3) non-profit corporation, receives no taxpayer dollars, survives on donations, and is virtually unique in Connecticut by serving residents for free. Currently, the service has nowhere to meet and train, and nowhere for volunteer crews to bunk during storms.

Earlier this year, EMS received a commitment of $500 thousand to expand the firehouse and build quarters. The potential donor is the estate trust of Daniel Offutt, which recently gave $215 thousand to Weston's library and has helped EMS purchase a new ambulance.

The potentially worrisome fiscal news is that funds from EMS do not have an indefinite shelf life. If the project is not approved, or if there is a significant delay, it is possible that the Offutt trust's $500 thousand offer would be withdrawn. In all likelihood, the additional $250 thousand directly from EMS would go with it.

As a result, Weston would lose the rare opportunity to have a third party help pay for improvements to a town-owned property. For their part, EMS could lose a rare major donation. Unless they decided to try going it alone.

EMS has long desired a physical headquarters. The service's president, Jon Weingarten, has been working for years to get it done. None of his intentions have come to pass. He told us EMS is "determined to move forward with a plan and make it happen," and that jeopardizing donated funds which would benefit EMS, Fire, and the whole town is not a tenable prospect.

Mr. Weingarten explained that if EMS were forced to build a standalone facility, it would require twice as much space, more money, and involve relocating its ambulances off the main town campus. This means Weston's vital, well-coordinated emergency services operations would be separated.

Editor's Note:
In a previous edition, we indicated that the cost of the 2014 project would have been $12 million. In fact, while that figure had been widely rumored, the plan itself was never completed. By the time the project was shelved, final costs had not been determined, and estimates were trending lower.