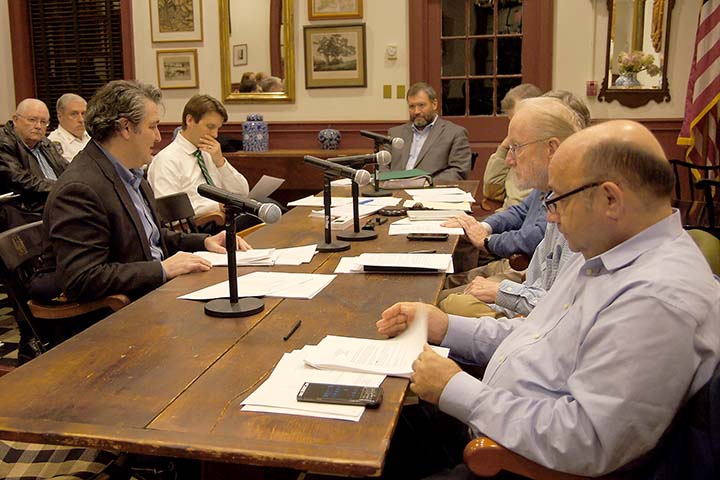 October 22, 2018 — This is the third of a three-part report on preliminary plans presented by First Selectman Chris Spaulding to address long-needed improvements in Weston's public safety capabilities. This part is about where the funding would come from. Part 1 contains an overview of the project and the portion involving the firehouse and EMS quarters. Part 2 is about the needs of the dispatch center, communication systems, and the police department.

Weston has the money for this project, even at the highest estimates. The Town currently has approximately $18 million in reserve. Most of those funds must be held to maintain the town's credit rating and meet unforeseen needs. The expenditures for this project would draw down those reserves, but, according to the First Selectman, leave plenty to protect Weston's AAA rating and be ready for a rainy day.

As Dr. Spaulding explained to the Board of Finance, the Town's high levels of savings can be problematic. A large surplus can weaken the administration's position in labor negotiations, where the question of whether the Town has resources to pay more in salaries and benefits becomes a bone of contention.

The First Selectman also expressed concern that Weston's fund balances, being among the highest in Connecticut, could once again tempt the State to force Weston residents to pay millions of dollars for state employee and municipal teacher pensions and benefits.

One way to dispose of the surplus would be to return the money to taxpayers by reducing the mill rate. If that were done in one shot, taxes would simply spike up again the following year. And with the funds gone, Weston's public safety needs would be, as Dr. Spaulding put it, "kicked farther down the road."

The Board of Finance

Thursday evening's joint meeting was shorter than expected. The Selectmen had already met, and much time on the Finance agenda had been consumed by a dispute with the school district about how to use money saved in a repair project at Weston Intermediate. After that, the boards and police commissioners had a lengthy executive session and tour of police headquarters.

With the hour getting late, Dr. Spaulding spoke only briefly. Presentations by the project architect and communications equipment representative did not occur. Little time or energy was left for discussion.

In general, members of the finance board seemed positive about the proposal and moving ahead. One exception was Rone Baldwin, who advocated waiting until next year's budget cycle. Other members, particularly Allan Grauberd and Richard Bochinski, agreed with the First Selectman that the need to act is urgent.

As it stands, even if a decision is made relatively soon, building cannot begin until spring, and would take nearly a year and a half to complete. Dr. Spaulding noted that deferring a decision would delay the start of construction and might also cause costs to inflate by as much as three to five percent, not including the effects of new tariffs.

It's Up to the Public

At the end of the meeting, the finance board members agreed to take up the matter again at their November 8 session and focus exclusively on it. They agreed to examine plans and specifications in more detail, and asked that pro forma year-end balance sheet projections be prepared.

As a practical matter, Finance's role in this decision will be more to advise than consent.

During a fiscal year, when spending needs arise that were not budgeted, the Selectmen submit supplemental appropriation requests to the Board of Finance, which has the final say. But the Town Charter limits how much can be allocated that way in a given year. This investment is about three times that limit, so the final say belongs to citizens.

The only way funding for the project can be authorized is by public vote at a Special Town Meeting. The Selectmen have not formally acted, but it appears they intend to call a meeting sooner rather than later, depending on how quickly designs are drawn, equipment decisions are made, and cost estimates become firm.