Westonites Join March for Our Lives 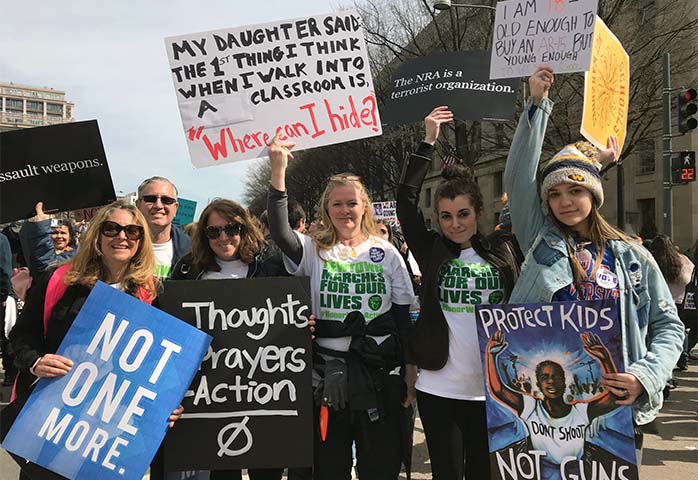 March 25, 2018 — On Saturday March 24, Elissa Teles, a Weston High School senior, led a group of friends and neighbors to Washington, D.C. for the March for Our Lives rally. Ms. Teles, an organizer of the March 14 student walkout (related story), travelled with Sarah Grigerick, Nancy Kirwan-Hayden, Samantha Nestor, Andrew Paladino, and Chris Reilly. The group was part of a southwestern Connecticut delegation from the Newtown Action Alliance and consisted of more than 400 students,teachers, and parents.

Ms. Teles said "I went to the march to better understand and experience the full magnitude of the movement. I wanted to march alongside people of all ages, ethnicities, genders, all brought together for the same purpose. This particular march was special because the offices surrounding us in D.C. belong to the people who we are trying to reach, the people who hold the power to change the country."

Chris Reilly said "It was an honor and privilege to join a contingent from Newtown for the March for Our Lives. It was moving and inspiring day. I came into contact with at least three people who had been victims of firearms attacks, one who held a poster of an x-ray of his head with a bullet in it. He beat the odds. So many others don't. While episodes like that, and the testimonies up on the stage of so many who were victims of gun violence, both physically and mentally, made for an emotionally exhausting day, we were also incredibly inspired and awed at the positivity and purpose emanating from these kids. If they are any indication, the future of this country is in good hands."

Samantha Nestor said she is "hopeful" after participating in the march. "Our band of six travelers from Weston to D.C. laughed, cried, marched, and bore witness to the unbelievable outpouring of determination for change. I’m grateful to these remarkable young people who organized and took action, for the friends and allies supporting them, and especially for the opportunity to personally experience the day with a member of this remarkable generation."

"The most powerful moment for me," said Sarah Grigerick, "was realizing that all the speakers on that stage were children—no campaigning politicians, no important 'adults.' These kids are not going to be talked down to, or 'reasoned with,' or bullied out of their righteous anger. They are sick to death of dying, of watching their friends and family die, of participating in 'dying drills.' I was so proud to stand alongside them and support a movement that shouldn’t need to exist. We failed them after Newtown. But after yesterday I believe they will save us."

Andrew Palladino said "The March for Our Lives in Washington, D.C. sparked a host of emotions. I couldn't have been more inspired by the passion, strength, and tenacity of the children who spoke with such clarity and hope for change. However, I am frustrated that the collective voices and votes of adults who are as passionate about common sense gun legislation have fallen on compromised and deaf ears. As the father of two young children, I am embarrassed by our generation's failures on gun control and in securing a safe environment for our kids. But, I am confident the Parkland students have now sparked the flame for a greater generation ahead."