Town to Consider Sale of Fromson-Strassler 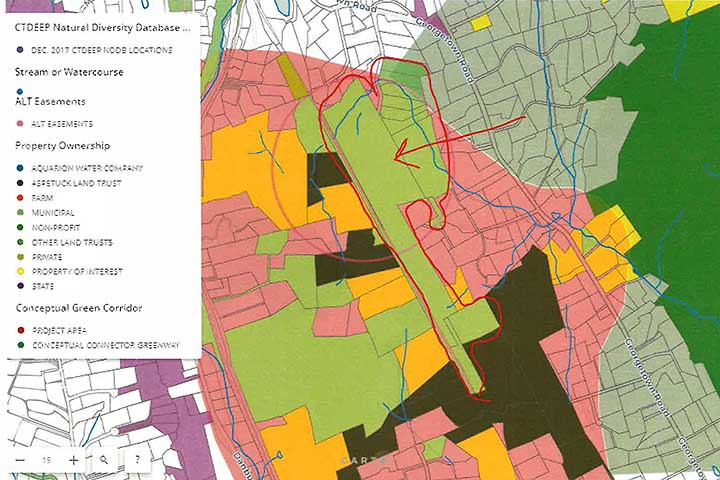 December 22, 2018 — Aspetuck Land Trust is actively pursuing a grant opportunity in hopes of purchasing 86 acres of land owned by the town of Weston and preserving it as open space. On Thursday evening, the Board of Selectmen took action to begin formal consideration of the idea and get input from the public.

The land, known as the Fromson-Strassler property, is in the northern corner of Weston, next to Georgetown on the Wilton line, abutting other terrain currently in the Land Trust’s care.

First Selectman Chris Spaulding is strongly in favor of the possible sale, and said “if we do sell, there will be a deed restriction that it can never be developed. It will be open space forever.”

The grant opportunity is part of of a Department of Energy and Environmental Protection (DEEP) program designed in part to provide financial assistance to municipalities and nonprofit conservation organizations to acquire land for open space.

Apparently, the opportunity was identified only recently, and the clock is ticking on a February 7 application deadline. Many Connecticut towns and cities are expected to compete for the funds.

According to Dr. Spaulding, ALT hopes to improve its chances of success by obtaining from the town, before the application deadline, a letter of intent to sell.

This will require swift action by the Selectmen, the Planning and Zoning Commission, perhaps the Board of Finance, and definitely the public. Weston’s charter insists that sales of town property be approved at a Special Town Meeting.

The grant would cover up to 65 percent of a purchase price. By whatever means, the Land Trust would have to come up with the rest.

A selling price has not been agreed and possibly not even discussed. An independent preliminary appraisal puts the market value of the property at $1.03 million. That is considerably less than the $2.25 million the town paid for it in 2003.

“I wish it were worth more,” said Dr. Spaulding.

The land has been been a non-performing asset since it was acquired. According to Selectman Stephan Grozinger, “many in town believe it is conserved land already. But it’s not.”

Mr. Grozinger said “the next Board of Selectmen could decide to sell it as a multi-family development, or a public petition could decide that it be sold. This is an excellent way to make sure this is a conserved piece of land in perpetuity.” He noted that the money the town receives from a sale could be put to other important uses.

Unlike the Moore Property, which the town bought at the same time, there are no deed restrictions on Fromson-Strassler. The town is free to do with it as it wishes.

Selectman Samantha Nestor confessed she was one of the many who had assumed the land was designated for conservation, and said the sale “would help us be true to one of the pillars of Weston, which is open space.”

In terms of development potential, the land has a number of shortcomings. Only about 20 acres could be built upon, as the rest are wetlands and watercourses.

Dr. Tom Failla, formerly a member of both the Conservation Commission and Planning and Zoning Commission, told us “development has passed the land over because of steep slopes and escarpments, boulder fields, extensive wetlands, including streams, swamps, bogs and lack of main road frontage and access.”

In addition, while a river may not literally run through it, an Eversource high-capacity power transmission system does, virtually down the middle.

Dr. Spaulding said he knows of no time since the land was acquired that anyone approached the Town with a development proposal. The 2010 Town Plan of Conservation and Development mused that an office complex could be built there, but nothing ever came of it. Dr. Spaulding suggested this may be due to Fairfield County’s long-soft office space market.

Weston voters approved purchasing the land in 2003, about one year after a court upheld the Planning and Zoning Commission’s ruling against a proposed development there.

In 1998, property owners Howard Fromson and David Strassler obtained Conservation Commission approval and zoning permits to build eight residential lots on the land. They later expanded the proposal and applied for permits to build 18 lots of affordable housing.

P&Z denied the application, and a lawsuit followed. In mid-2002, the court ruled in favor of the Commission, supporting its conclusion that Mr. Fromson and Mr. Strassler had not filed a new inlands wetlands application, that the proposed access road was unsafe, and that septic systems were inadequate.

Dr. Failla said he is “heartened” by the First Selectman’s insistence that a deed restriction prevent development, agreeing with Selectman Nestor that “Weston values open space.”

Dr. Spaulding said the property has long been coveted by the Land Trust and would be a “crown jewel, the heart of a preserved wildlife corridor. There’s a lot of wildlife in there. If they developed it, who knows where that wildlife would go?”

The land transfer would connect much of the open space managed by Aspetuck Land Trust into a cohesive whole.

Dr. Failla explained that ALT owns over 60 parcels totaling more than 300 open space acres in Weston. Among its largest tracts are the recently-acquired 40-acre Belknap property south of Fromson-Strassler and adjacent to ALT's Honey Hill Preserve.

This area forms the headwaters of the West Branch of the Saugatuck River and straddles the Norwalk River watershed in Wilton.

“These lands are beautiful for hiking and observing nature. They are abundant in flora, fauna, and geological formations,” said Dr. Failla. “Saving these lands for open space would be beneficial and in keeping with Weston's long-term policy to conserve its natural resources that provide our clean water and air.”

On Thursday evening, the Selectmen did not approve or disapprove the proposed sale, even though each member expressed support. Their action was to begin the process by submitting it to the Planning and Zoning Commission.

Given the short time frame for the grant application, it seems likely P&Z will take up the matter by mid January, beginning with a public hearing.