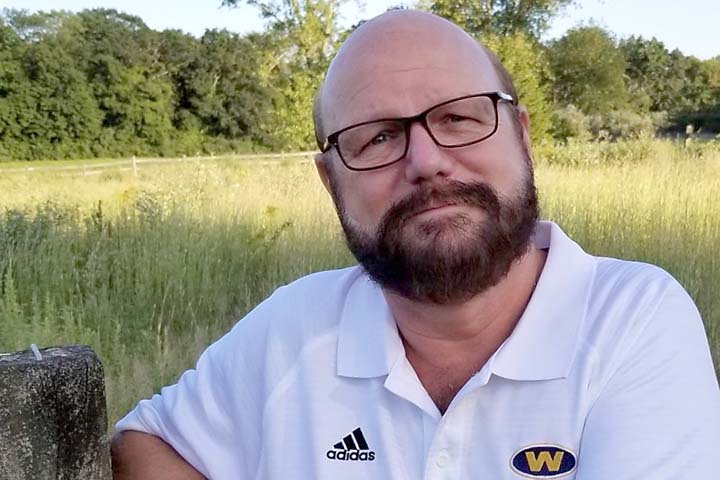 The award is presented by the Fairfield County Sports Commission. Mr. Meunier will be honored at the 14th annual Sports Night banquet on Monday, October 15 at the Stamford Marriott. He is one of 16 Fairfield County winners who are deemed to have made the greatest positive impact and contribution to each of their sports communities over the past year.

At the start of the 2004-05 academic year, Mr. Meunier arrived at Weston High School, where he also serves as a school counselor. Before coming to Weston, he was the director of school counseling at Daniel Hand High School in Madison, where he also coached boys tennis for eight years. He is a member of the CIAC Boys Tennis Committee.

"Everyone needs to challenge himself"

We asked Mr. Meunier to explain how his teams have been so successful. "First," he said, "you have to have talent on the team. After that, as a coach, you instill a philosophy that everyone needs to challenge himself."

One of the coach's first moves after taking over in Weston was to toughen the schedule, to play more matches, and to go up against larger schools. "You only improve by playing better teams," he said.

At first, a few parents complained. "None of the kids did," said Mr. Meunier.

Another part of his coaching and teaching style was developed several years ago after reading an article about "soul authoring," a philosophy first espoused by Dr. Monikah Ogando. In essence, it says that people are who they say they are, both author and protagonist of their own lives, and can design their lives around success.

For Coach Meunier, this meant having his program "make an imprint on kids beyond tennis." "I ask players — and their parents — how they want to look back on this program years from now. What will it mean to you, and to your life, in the future?"

He calls it the Bear Code. "Challenge yourself in every domain," he explained. "How good of a student are you? How good of a family member? How good are you as a member of the community? Take risks. I just want them to push themselves."

The players appear to have taken the lesson to heart. They actively support organizations like the Connecticut Mental Health Foundation, Relay for Life, Coaches Against Cancer, Norwalk Grassroots Tennis, Education Foundation, and 26 Days of Kindness.

"When it comes to just the tennis, I'm kind of an old-school coach," said Mr. Meunier. "I don't spend a lot of time 'entering their aura.' And we always have a strategic plan about how we need to improve. People always ask if we're going to win this year. We never ask ourselves that. We only ask ourselves how we're going to win."

About the award, Weston Sports Commission president Eric Albert said, "Every year, the Commission receives several very worthy nominations. Gary Meunier stood out from the crowd. Not only did his team have another double championship season, but his players continuously highlight how important Gary is to their overall development as students and athletes. Weston is fortunate to have such a high-caliber person leading this very successful program."

If you are interested in attending the awards dinner or being a local sponsor for Sports Night, please visit the Fairfield County Sports Commission’s website. Also, if you have questions about the Weston Sports Commission, please send an email.