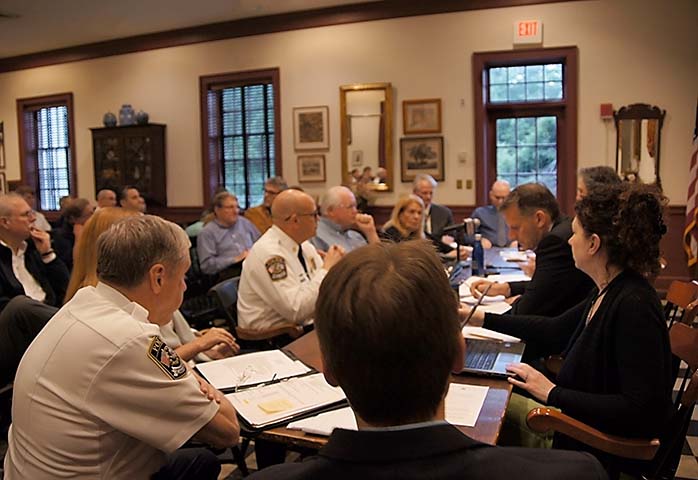 May 21, 2018 — On May 17, the Board of Selectmen allocated $158,220 as a supplemental appropriation in the 2018-19 Town budget that will enable the Weston Police to hire an additional School Resource Officer (SRO) and fund 546 hours of overtime associated with patrolling Weston schools an additional three hours each school day.

The measure is part of an augmented security plan developed jointly by Schools Superintendent William McKersie and Police Chief Edwin Henion in direct response to the mass school shooting earlier this year in Parkland, Florida. It was previously recommended by the Board of Education and the Police Commission. The proposal now goes to the Board of Finance for final approval.

First Selectman Chris Spaulding acknowledged that the Parkland tragedy resulted in "a critical re-evaluation of the way we are maintaining our security on campus." He added that the existing SRO program at the high school has been "wildly successful," and discussed the need for it to be expanded into Weston Middle School. "Kids are getting older younger", said Dr. Spaulding. "They are being exposed to risky behaviors and engaging in injurious behaviors at earlier ages."

Dr. Spaulding added that problems have been "bubbling up around the nation" in middle schools. He emphasized that SROs, despite being armed officers, do not primarily function as security guards, but rather to "keep an ear to the ground" and identify children who are at risk. "They also help inculcate respect by kids for men and women in uniform as people who are there to help them," he said.

The First Selectman expressed some concern that this was being done off-budget, while acknowledging that Parkland occurred after the new budget had already been formulated. Although funds for the increased police presence do not come from the education budget, Dr. Spaulding later implored school officials to work with the Town and police to find ways to reduce costs in other areas to lessen the overall impact on taxpayers.

Appearing before the Board with Chief Henion, Board of Education chair Gina Albert, Dr. McKersie, Police Commission chairman William Brady and Commissioner Beth Gralnick, Captain Matthew Brodacki stated that incidents like Parkland are increasing in frequency. Sadly, his point was proved the next day when ten more lives were lost in a school shooting in Santa Fe, Texas.

Captain Brodacki also told the Board that "a catalyst that caused the critical assessment" of Weston school security was eleven incidents in Weston schools — five from the middle school — that were troubling enough to cause the police to conduct threat assessments. Nationwide, he said, police involvement with schools is becoming "blended," with "police officers doing more counseling and counselors doing more police-based functions."

Dr. McKersie described how the broader school security plan includes a vital component of identifying families in crisis. "When you analyze what's going on in these tragedies," he said, "it's youth in crisis who have not been dealt with." He explained that new professional and counseling positions included in the new education budget will "allow us to support families in crisis, which is a key part of this effort."

Selectman Stephan Grozinger said he had come to the meeting "agnostic on this issue," and praised the existing police presence at Weston schools as providing "by any estimation, robust security," citing the "tremendous advantage" of having all schools in one place. He said he had become more comfortable with the proposal as Chief Henion described it as part of a "natural, thoughtful, well-considered progression." Mr. Grozinger agreed that SROs are a valuable way of "identifying and finding support for kids who are in deep, deep trouble."

Selectman Brian Gordon echoed the First Selectman's desire that the Town, police, and schools work together to achieve further cost savings to offset the additional expenditure. However, he supported the proposal, saying that behavioral problems often "start in sixth grade and can get very serious very quickly." Mr. Gordon moved to authorize the appropriation, which passed unanimously.