Westonites Speak Up at League of Women Voters Event 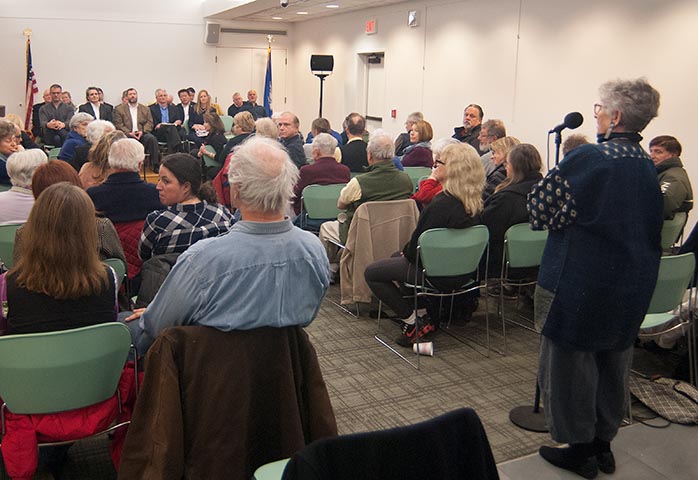 February 3, 2018 — The League of Women Voters held their annual Speak Up event in the Community Room of the Weston Library on February 3. Attending from the town were all three members of the Board of Selectmen, representatives from almost every town department, commission and committee, plus Weston's three state legislators: Senator Toni Boucher, Senator Tony Hwang, and Representative Adam Dunsby.

Topics in the detailed question and answer session included town amenities, environmental concerns, the education budget, the impact of the new federal tax law, the state budget crisis, and the proposed dog park.

The first question was what the town would be doing to add to Weston's amenities, particularly in view of the recently-announced increase in the cost of Westport beach stickers. First Selectman Chris Spaulding responded that the new Board of Selectmen has already held a workshop on a series of possible services, and will be conducting a survey to gain a sense of the town's priorities and to obtain ideas about how to pay for them.

In response to a question, Dr. Spaulding cited the town's recently-signed solar energy contract as evidence of the selectmen's major emphasis on the environment. Sustainability Committee chair Natalie Terrill described how the committee is working on a plan to inform the public and meet with local businesses to devise an approach to limiting or eliminating the use of plastic bags.

Several questioners were worried about the environmental effects of fracking wastewater, chemical lawn treatment and tick spraying. Dr. Spaulding discussed how the Sustainability Committee has provided guidance to the Board of Selectmen about a draft ordinance to ensure that fracking wastewater never comes into Weston. (Please see our related article.) He said there is no current town initiative on lawn treatment, but expressed concern that many residents may not be aware of the effects on ground water and wells from pesticides and poisons.

One resident appealed to the state legislators to "give us some help," because state regulations limit how much a town can restrict the application of such chemicals.

There was an extended discussion about the education budget. School Superintendent Dr. William McKersie and Board of Education chair Gina Albert detailed successful efforts to reduce costs in every function of the school district, with the exception of special education. Dr. McKersie described school funding in Weston and most districts as "in crisis," explained that current reductions are not affecting the classrooms, but cautioned that the current budget process must ensure that more impactful cuts will not be required in the future.

Special education funds, currently in deficit, receive an increase in the proposed new budget. Dr. McKersie stated that Weston schools are committed to "embracing every single student in the district." However, several residents expressed frustration, at times in deeply personal terms, with how the schools interact with families with special needs children. Dr. McKersie and Ms. Albert acknowledged that the district has "room to improve."

The impact of recent changes to the federal tax laws was discussed. One question was whether the state and town are looking into the possibility, as have other jurisdictions, of declaring the town a not-for-profit corporation, thus restoring the ability of taxpayers to claim a portion of their income as charitable contributions.

Dr. Spaulding explained that the idea is still being researched, but there are doubts about its legality, and that it would only work for families with children. Nevertheless, he said that the Western Connecticut Council of Governments is looking into it, and that if legal opinions suggest it would survive a challenge, the town would consider it.

Representative Dunsby described such a solution as "probably problematic, and the less likely path." Many Connecticut citizens, he said, favor the new tax laws, as they benefit those who do not itemize deductions. He also related that other governments are exploring whether to shift tax withholding to a payroll tax. Senator Boucher expressed concern that the issue "pits parts of Connecticut against each other," that corporations would "hate the idea of a payroll tax," and worried that such a measure would add to Connecticut's reputation as anti-business.

The state's own tax and budget issues were the subject of much discussion. Ms. Boucher said the state is $4.5 billion in debt, with a $200 million deficit this year. She was particularly concerned that the state transportation fund has been "raided" for so many years that its weak condition is being used to justify increased gas taxes and tolls on Connecticut highways, both of which she opposes.

Mr. Dunsby also opposes tax increases and tolls, suggesting that the state should first look at proposed spending, including $100 million to build a new train station in Bridgeport right next to the existing one. Senator Hwang related how even the state's Tax Commissioner says "we can't tax people any more." Nevertheless, he wouldn't rule out tolls or taxes, at least until the Legislature first takes a hard look at spending, saying "we should put everything on the table."

Perhaps surprisingly, the proposed dog park received fairly little attention. The police were asked to help make sure Lords Highway East is kept safe. In the latest version of the dog park plan, an entrance would be built on that road, which the speaker described as "too narrow," especially for emergency vehicles. Chairman William Brady said the Police Commission has not seen the Town Engineer's traffic study, but that if and when it does, "we will be asking those same questions."

Another speaker, expressing sympathy for the opponents of a dog park, hoped that a dog park would "help people across generations connect."