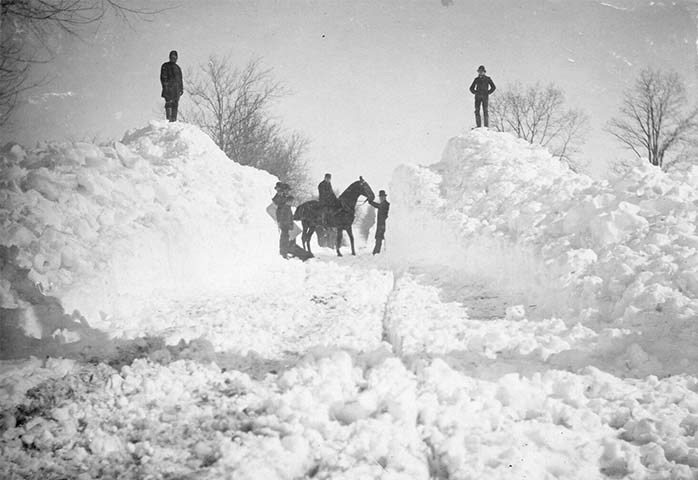 The havoc unleashed by the recent Nor'easters has been hard on Westonites, but the blizzard that struck during the Ides of March 130 years ago also had a major impact. Back then, every day was a day without power, or a telephone, or a motorized vehicle.

Drawn from the archives of the Weston Historical Society, here are three in-person accounts of that winter storm, the biggest in our history.

Lillian Morton, in her oral history interview for the Historical Society, told of snowdrifts along Godfrey Road East "as high as a maple tree (about twenty feet)" and it taking "a week before they cleared down to the main road (Newtown Turnpike)."

Ruth Lockwood, born in 1917 in the family house on Georgetown Road, remembered her father telling stories about snowdrifts reaching the second story windows and having to dig a tunnel to get to their barn. He and his brothers were still sliding down snow banks in June.

The most detailed account in the Society’s archives is that of Helen Fitch Sturges, whose husband's family had settled in Weston in 1760, and who kept a daily journal. She wrote:

“March 13: By noon it was impossible to reach the woodpile so we had to go into the cellar and get old pieces of a bin to burn. My grandfather and oldest son started for the red barn to tend to the oxen and calves, but the storm was raging so they had to come back. All night the wind and storm kept up a continuous howl, and it was 12 above zero.”

“March 14: John and Sammi managed to reach the red barn, found the calves standing by the oxen and the four looked as if they were forsaken. They managed to put the oxen in the horse stables and dug a path to the cow barn for the calves. Now all are under cover except three turkeys. The windows in the one room where we had a fire were so covered with ice and snow we could not see out, and one south door was the only door we could get out and the snow in front of that is five ft. High—something of a step.”

“March 15: At nine it commenced snowing again and kept it up till 2 in the afternoon; snow piled everywhere it could find something to lean against. Up until now we have had plenty to eat, but will be short of provisions in a few days unless we can get to the station (Cannondale).”

“March 16: Sun very bright and warm. Snow melting fast, but the chicken yard is full and the banks are so high that if you go up on a snow bank you can easily reach the tops of the highest pear trees. The children think it is great sport.”

“March 31: [Fifteen days later] Mr. Sterling drove by, the first team of horses that has passed here since March 12th. He delivered from Mr J. Templeton, South Wilton, a rag carpet that he has been weaving for me. I had sewed 51 pounds of rags [for it] in two months; it made 27.5 yards of carpet. Cost of weaving it was $6.32.”

The story of Weston, in documents, photographs, oral histories, memorabilia, clothing, farm tools, and much else can be found in the Weston Historical Society's archives, its barn, and its historic Coley House.

Important accounts of people and events since the founding of the town were regular features of "The Chronicle," the Society's comprehensive quarterly newsletter published between 1982 and 2004, which has been digitized by the Weston Library. A series of recent oral histories, which include videos and transcripts, can be found on the Society's website.

The Historical Society is currently preparing for a comprehensive exhibit and related events titled "Life in the Sixties." For more information about this and other programs, as well as to become a member, visit the website or call 203-226-1804.