Back in Focus: the Dog Park 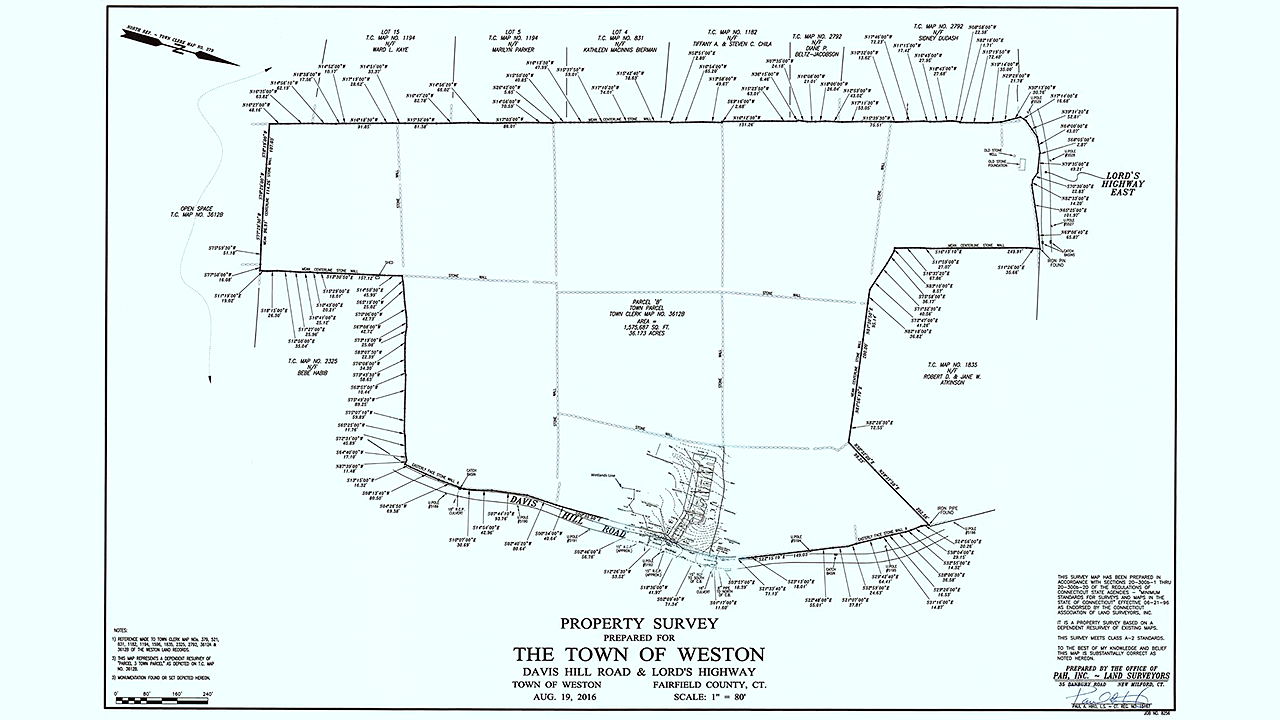 A proposal to build a dog park in Weston is back in focus nearly four years after the project was approved by voters, which appeared to settle the matter, but did not.

The proposal voted on in 2018 was to build a three-acre fenced dog park inside 36 acres known as the Moore Property, which the town bought in 2003 and set aside for possible future use.

The Conservation Commission approved the plan shortly after the vote, but the Town voluntarily deferred proceeding until legal challenges ran their course. That took over two and a half years, partly extended by the pandemic. The Town prevailed at every level, at a cost of over $52,000 in attorney fees.

At present, the Board of Selectmen, with a new design and cost estimates in hand, must decide whether to move the project forward.

A sense of the Board

Only First Selectwoman Samantha Nestor is clearly in favor of the park. Selectman Martin Mohabeer’s position appears to be a developing story. Selectwoman Amy Jenner is clearly opposed.

With the new design, the Board will first have to decide whether to refer the project once again to the Planning and Zoning Commission and the Conservation Commission. Over the six years since it was first proposed, both bodies have considered the project several times, including in public hearings that at times were rancorous.

The Board will also have to decide whether and how to fund the Town’s portion of the costs, which mainly consist of work needed to build an access driveway and drainage system at the park’s location.

Funds to build the park itself come from private contributions to Weston Dog Park Inc., a 501(c)(3) non-profit formed in 2016.

This would be the first time any Board of Selectmen has voted the proposal up or down. Previous Boards have referred the project to P&Z and Conservation and scheduled the public vote, but none has acted to formally approve it or allocate funds.

Once an appellate court’s final ruling in November of 2020 ended the path to further litigation — at least regarding the 2018 Conservation decision — designs for the dog park as first proposed came with estimates for Town costs at about $550 thousand, more than three times the amount expected in 2018.

A new design scales down the park and brings the Town’s construction costs down to 2018 levels, just under $176 thousand for site clearing, earthwork, materials, and storm water structures.

First Selectwoman Nestor said, “I am dedicated to building the dog park at the Moore Property and respecting the townspeople’s vote. It’s time to move the process along. I am extremely grateful to the public-private partnership with Weston Dog Park Inc. and their efforts to fund more than $100 thousand of the park and engineering design.”

Selectman Mohabeer has said the will of the voters should be respected, but that he does not believe the 2018 vote was binding, that the project should proceed, but that the Town should develop a “Plan B.”

The “B” may refer to Bisceglie Park, an idea considered at the beginning but ultimately rejected.

Selectwoman Jenner opposes a dog park at the Moore Property but appears to favor a Bisceglie location. Of the 2018 vote, she said, “that was not a vote, that was a non-binding referendum.” She said the vote was close enough to warrant reconsideration, and that much has changed in the years that have passed, including a new Plan of Conservation and Development (POCD) and master plan for Town Center.

The years passed because of litigation. The new POCD actually counts “Dog Park (Planned)” at the Moore Property as one of the town’s recreational assets, and the Town Center plan does not extend to Bisceglie Park.

Bisceglie’s proximity to Town Center may have its appeal, but as far as we can tell no detailed assessment has ever been made of whether a dog park of any appreciable size could be located there. Whether public sentiment would favor closing the pond, altering the playground, or reducing the number of ball fields to make way for a dog park is unknown.

Wetlands are also an issue at Bisceglie. Concerns about a dog park’s impact on wetlands at the Moore Property were at the center of the Conservation Commission’s 2018 deliberations and the subject of subsequent litigation. The Commission found there would be no impact, the court ruled that the Commission had been diligent and that the evidence supported its decision.

Also, the public voted for a dog park specifically on the Moore Property.

The 2018 public vote was not a referendum. It was a Special Town Meeting, by definition a legislative event. It was scheduled by the Selectmen after a sufficient number of citizens signed an official petition requiring them to do so.

Confusion about the “referendum” term is probably attributable to when Town officials erred by first structuring the vote as a referendum so that absentee ballots could be used to maximize public participation. That turned out to be illegal, and the vote on the scheduled date had to be canceled anyway when violent weather interceded.

The discussion part of the properly structured Special Town Meeting took place on March 22, 2018 with its own moments of rancor. The vote by machine ballot was held from 6:00 am to 8:00 pm on April 4.

As these things go, turnout was huge, at least ten times the size of a typical Special Town Meeting and nearly five times the number of votes in annual referenda that decide budgets worth tens of millions and determine tax rates.

1,686 votes were cast. The majority, 52.7 percent, voted yes. 47.3 percent said no. Because the net difference was 88 votes, some appear to consider the margin too close to be decisive, despite the percentages, despite the majority.

The question put to voters began with “Shall the Town of Weston establish an enclosed, approximately 3-½ acre dog park on the town-owned 36 acre parcel … .” (The full text is in Note 1 at the end of this article.)

In the world of legislative language, that first word, “shall,” is a command. Not a request, not a suggestion.

So yes, the vote was binding.

The ballot question did not command the Town to fund the project. It couldn’t.

The Town Charter allows citizens at a Special Town Meeting to do many things, but not to appropriate funds, nor to compel the Selectmen or Board of Finance to do so. As a result, and as we reported in 2018, citizens were voting on the dog park only in concept.

1. The full ballot question: “Shall the Town of Weston establish an enclosed, approximately 3-½ acre dog park on the town-owned 36 acre parcel on Davis Hill Road as depicted in a visualization map and in accordance with a draft MOU [Memorandum of Understanding] between the Town and Weston Dog Park, Inc., both of which are available on the town website and in the Town Clerk’s office?”

2. Until relatively recently, the word “shall” in legislation was always taken as an absolute decree. In the past few years, courts have sometimes ruled that if the statement is written imprecisely and creates what is known as a “false imperative,” it can be construed to mean “may.” As a result, many federal agencies are revising thousands of regulations to replace the word “shall” with “must” to remove all ambiguity. Not counting the absent and unallowable funding mandate, the phrasing of the dog park ballot question does not have this defect.