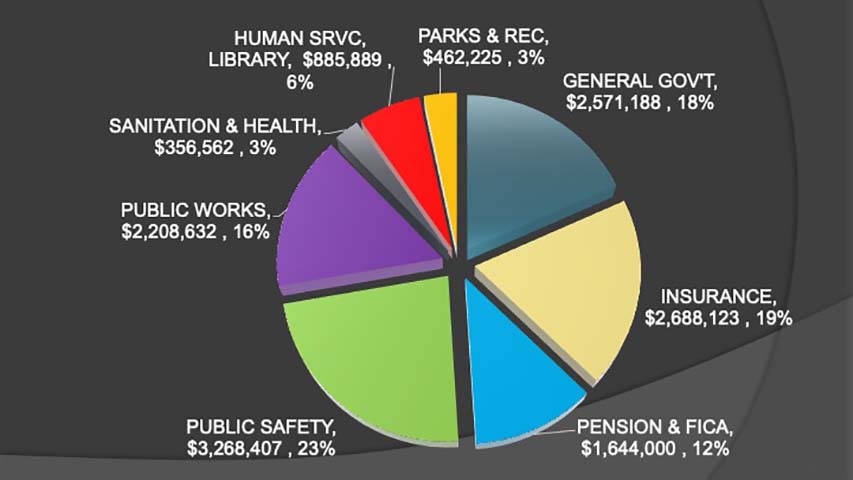 The First Selectman's budget request for next fiscal year calls for a 2.7 percent increase in Town operating funds and significant investment in capital items.

First Selectman Chris Spaulding presented the request to the Board of Selectmen on Tuesday evening, February 23.

The proposed operating budget rises to just over $14 million, up by roughly $375 thousand. More than half of the 2.7 percent increase is driven by a salary reserve for expiring contracts and pension cost growth. In addition, the Town's health insurance premiums rise next year by eight percent. The Town's employee headcount, as measured in full-time equivalents, declines slightly.

Proposed capital spending reflects, in the words of the First Selectman, that the town has been “chronically under-investing” for years.

The Town's proposed capital items add up to $2.1 million (rounded). Combined with Board of Education requests totaling $800 thousand, next year's capital budget, if approved, would increase $1.7 million from the current budget to just over $2.9 million.

The good news is that known and potential offsets will reduce the figure to just over $1 million, closer to a typical level.

The Town has available about $765 thousand from close-outs of earlier projects, an untouched health insurance reserve, and a capital bond fund.

In addition, the anticipated sale of the Fromson-Strassler property to Aspetuck Land Trust would bring in over $1.1 million to fund capital projects.

That transaction is not expected to close until December. The Selectmen agreed in Tuesday's meeting that ways will have to be found to make clear to the voting public that the net capital line isn't quite as huge as it appears.

But Dr. Spaulding said he expects future years will indeed require capital expenditures at a higher level, as much as $2 million per year, as infrastructure and other major needs continue to accumulate.

Major expenses in the proposed capital budget include $262 thousand for police body and vehicle cameras plus systems and services to process and store video.

That expenditure is mandated by the Police Accountability bill passed by the Legislature last year. In theory, it is not a completely unfunded mandate. In reality, it probably is. The legislation provided for 30 percent State reimbursement to towns not in fiscal distress, but neither Dr. Spaulding nor Town Administrator Jonathan Luiz seemed at all confident Weston would ever see it.

Other major items include a $225 thousand final installment to repair the leaky Library roof, $200 thousand for a piece of Public Works heavy equipment, and $262 thousand for half of Weston's obligations in a State project to replace the degraded bridge on Michaels Way.

The budget request also includes $360 thousand in a surge of funds to bring Weston roads up to par. This reflects a finding presented a year ago by consulting engineers that the Town needs to increase road paving funds just to maintain current conditions and nearly double them to get to a desirable level.

The final big-ticket item is $266 thousand for half of Weston's 20 percent share of costs to build Phase 3 of a sidewalks network in the center of town, closing a loop to be built in previous phases.

In short, Phase 3 would have sidewalks on Old Hyde Road running from Lords Highway to Norfield Road, then going across to Norfield Church. (A full view of the sidewalks project can be found here.)

At some point, the public will have to okay Phase 3, and may be asked to do so sooner than expected. Town officials learned only recently that roughly $2 million in federal funds are available for the project if the Town is willing to put up one-half million, 20 percent of the estimated project cost.

On the whole, both the Town and the school district are in remarkably good shape. Both are projected to have a surplus at the end of the fiscal year, despite earlier fears that the district would have a six-figure deficit.

The Town has a healthy and growing reserve fund balance. Even the Grand List has ticked up, ever so slightly. (A major change, if any, from robust home sales will not appear until the next revaluation, in 2023.)

The State is in good shape too, and Governor Ned Lamont has publicly assured municipal leaders that no thought is being given to pushing costs, such as pension fund contributions, down to towns.

The First Selectman's budget anticipates no change in direct financial support from Hartford, which is a safe bet. But that doesn't count grants.

The administration has already won grant commitments worth millions, with possibly more on the way. Applications totaling $2.7 million to pave long stretches of Lyons Plain Road and Valley Forge Road recently passed first muster at WestCOG, the Western Council of Governments. Those funds, if ultimately approved, could greatly accelerate improvements to Weston roads and relieve a significant amount of budget pressure.

On Thursday evening, the Board of Selectmen meets again on the budget. The Selectmen and school district officials will refine the list of capital items, in some cases reaching for clarity on school projects where cost estimates are still being developed.

By the end of the meeting, the Board will vote to transmit budgets for the Town, school district, and capital expenditures to the Board of Finance, whose review and approval process begins in March.