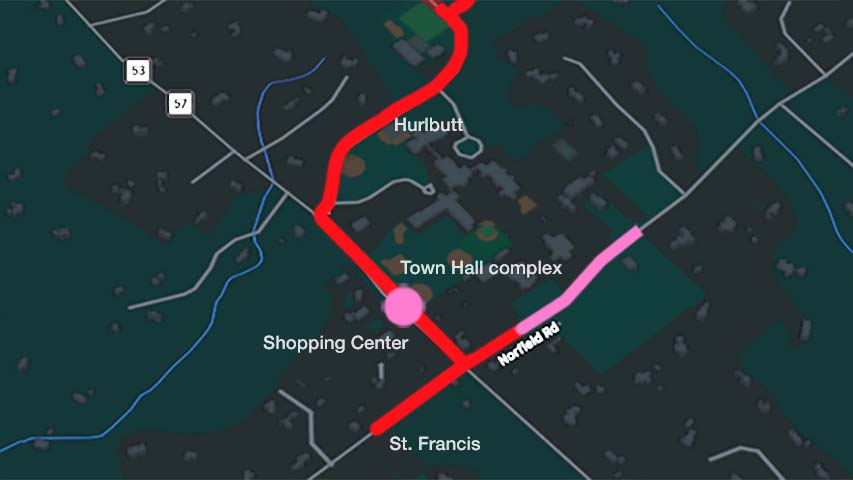 Plans for a network of sidewalks in the center of town have developed piece by piece over several years. This is a catch-up on the big picture and where things stand.

As we first reported more than two years ago, a plan was created to apply for state and federal grants to make the area more pedestrian friendly.

What eventually emerged is three phases of sidewalk construction, ultimately forming a 3-½ mile loop around the center of town. Each would be funded by separate grants, if they could be obtained.

The Town had never been successful winning state transportation funds, which are funneled from Hartford to regional Councils of Government for committee evaluation and approval by a vote of member town chief executives.

Weston's track record improved in August of 2018 when the town was awarded $397,860 from the State's Community Connectivity Program for what became known as Phase 1 of sidewalk construction.

Currently, only a couple of approvals remain: one from the Historic District Commission and a final sign-off on design from the Department of Transportation. Construction could begin early next summer.

The graphic below depicts where sidewalks in this phase will be built. 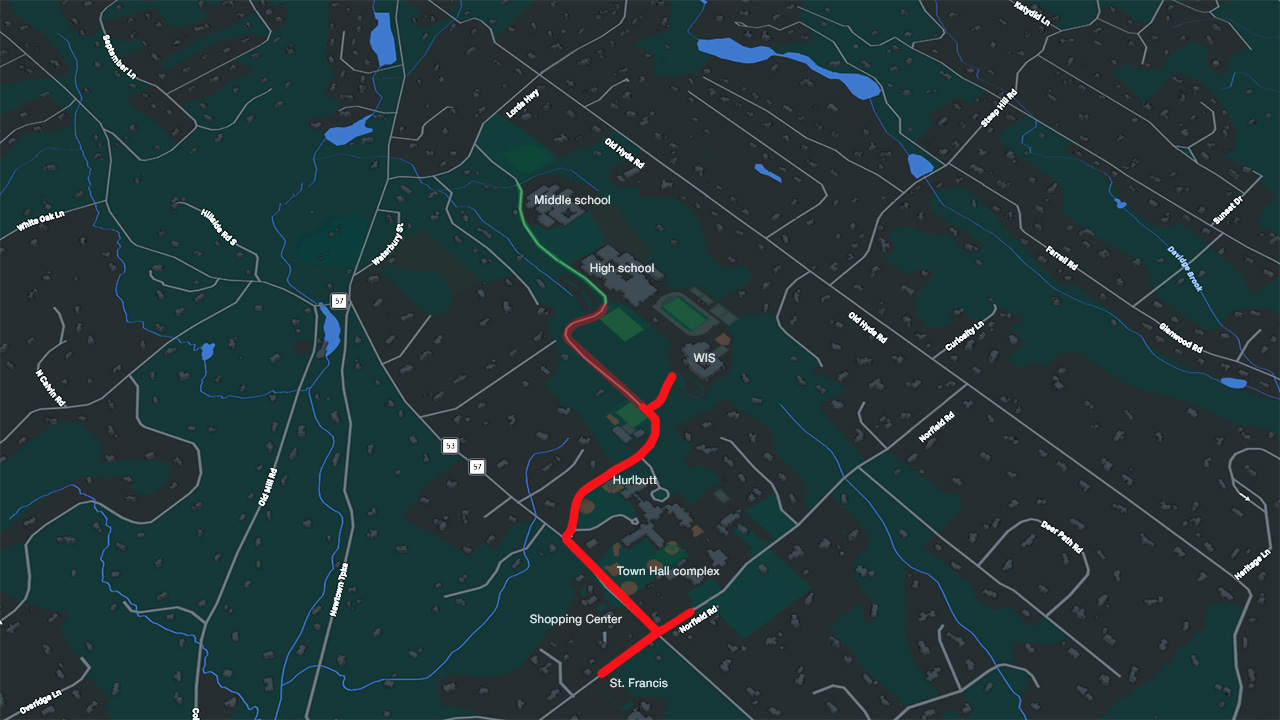 In bright red on the map, sidewalks will run from St. Francis to Route 57, then up Norfield Road to the Town Hall complex. They will also go up Route 57 to School Road, make a right turn, and proceed past Hurlbutt Elementary to the Intermediate School.

At that point (in darker red), a stone dust path leads to the existing sidewalk (in green) that goes to Weston Middle School.

In December of 2018 the Town administration launched a long-shot bid for a much larger grant, eventually $1.8 million, from the State's Local Transportation Capital Improvement Program (LOTCIP). One month later, they won it. 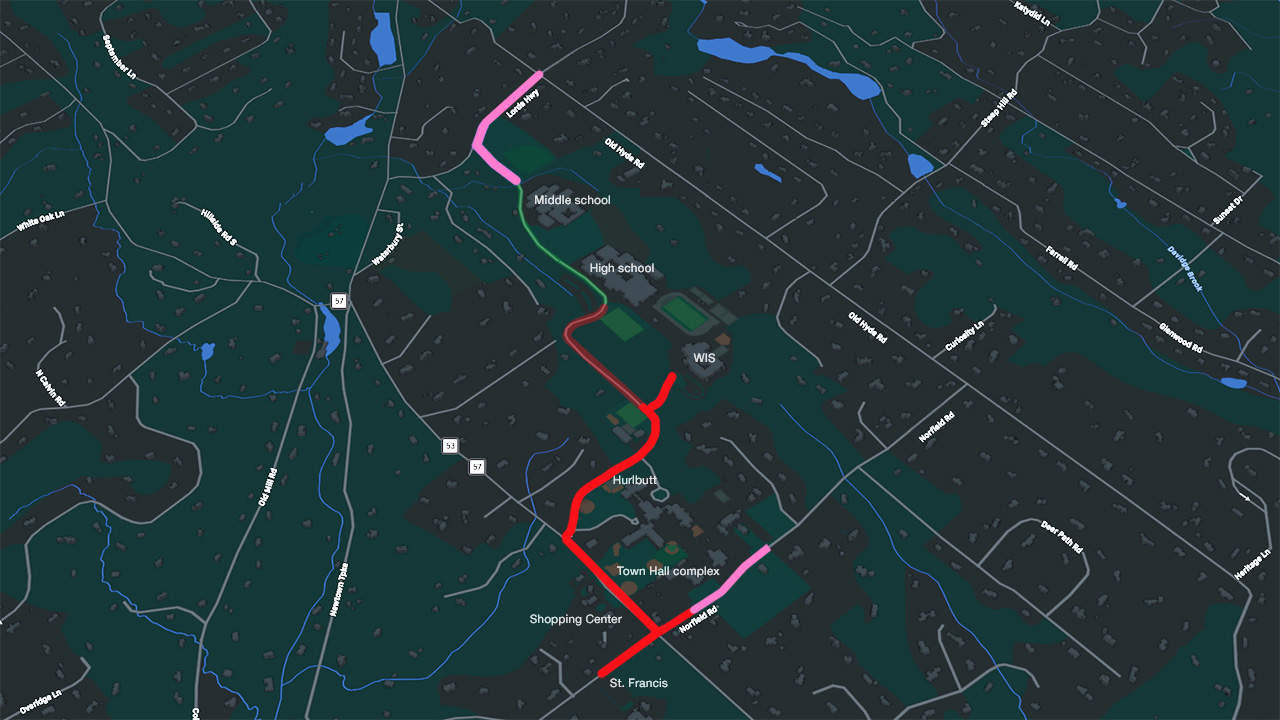 Phase 2 (in pink) is almost completely signed off. Once a bid process is initiated and completed, the project goes back to WestCOG for inclusion in a bonding package.

Sidewalks pick up where Phase 1 left off, going up past Revson Field to Lords Highway, making a right turn, and ending at Old Hyde Road. Another section connects the Town Hall campus to Norfield Church. 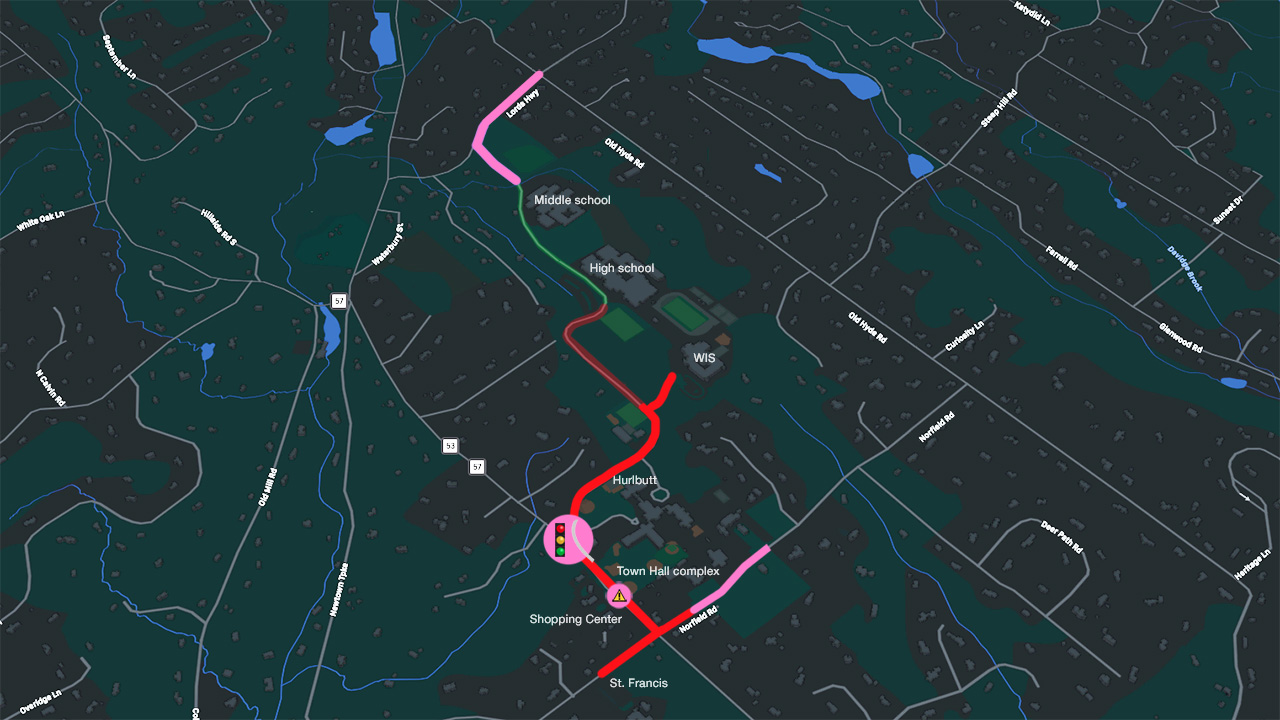 The major part of Phase 2 is a complete rebuild of the intersection of Route 57 (Weston Road) and School Road, which is congested at drop-off and pick-up times when schools operate in normal conditions.

Northbound on Route 57, a new right turn lane onto School Road will ease congestion. Southbound, a new left turn lane will allow vehicles passing through to do so more safely on the right.

In addition, the Department of Transportation will build a crosswalk with a flashing beacon across Route 57 to the shopping center.

Phase 3 closes the loop at an estimated cost of around $2.5 million. For that, the Town applied for a Transportation Alternatives Set-Aside grant. The funds originate at the federal level and are distributed to states.

It was initially believed that Set-Aside funds would not be available until a long-awaited federal infrastructure spending bill is introduced and passed. But Town officials learned from the Department of Transportation only recently that the money is available now and that DOT is eager for the ball to get rolling. 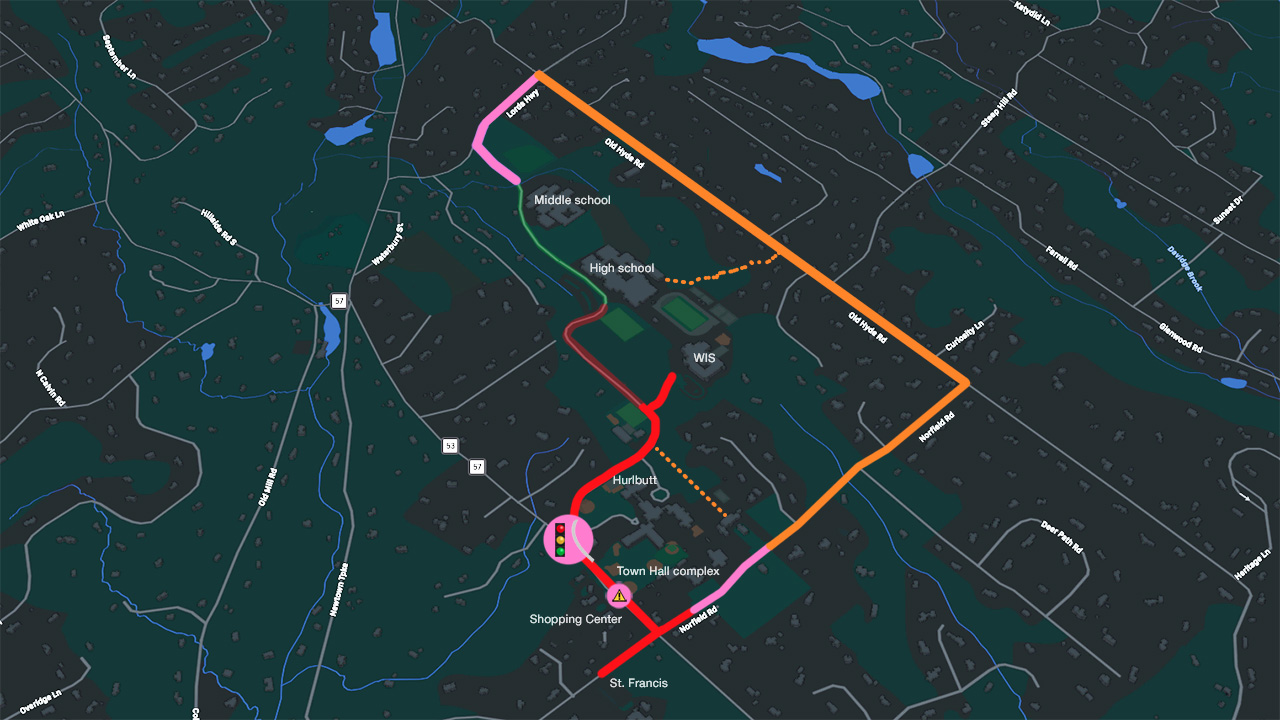 In Phase 3 (in orange), sidewalks would be built on Old Hyde Road from where Phase 2 ended at Lords Highway all the way down to Norfield Road. They would then proceed down Norfield Road, connecting to where Phase 2 left off at Norfield Church.

On the map, the straight dotted line is a scenic pathway leading from the back of Norfield Church to Hurlbutt. Why? Including it added to Weston's score in the grant application.

The squiggly dotted line is described as a 12-foot wide multi-use path. A primary value appears to be an exit route for emergency vehicles in the event of natural disasters. If, for example, the Norfield Road entrance to Firehouse No. 1 were blocked, currently the only way out is down a steep, soft slope leading to Route 57 at the Onion Barn. The concern is that a fire truck would get stuck.

This phase is the most complicated of the three because it could affect properties and may require easements. At some point, probably soon, Town Hall will launch a public information and input effort. Consultants Milone & MacBroom, now known after an acquisition as SLR, have been engaged to create a stakeholder and public engagement process.

This phase would also require the greatest investment of local funds. The grant requires Weston to cover 20 percent of costs. In the capital budget request submitted by the Selectmen this week, allocations of $266,500 this year and next are proposed.

If this part of the project proceeds, the Department of Transportation says construction would likely begin in 2023.