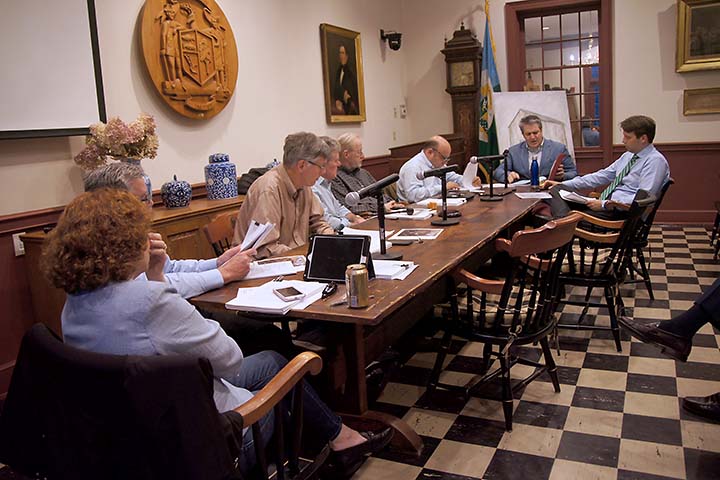 June 22, 2019 — On Thursday evening, the Selectmen’s request for funds to conduct due diligence on the possible purchase of Weston Field Club came to the Board of Finance, which didn’t act on it.

"There's nothing to do here,” said chairman Steve Ezzes.

So far, acting club officials have acknowledged receiving the Town’s offer, but have not provided a clear indication of how — or whether — they intend to proceed.

A letter to Town Administrator Jonathan Luiz from the Field Club’s acting finance board chairman, Adam Luysterborghs, stated an intention to continue the club’s tradition and private status, and said “absent a vote by members, the Weston Field Club is not for sale.”

At press time, Mr. Luysterborghs has not yet responded to an email from Mr. Luiz asking if the offer will be presented to members for a vote.

In correspondence on Friday with Weston Today, Mr. Luysterborghs and the club’s acting president, Joseph Colaprico, said: “For the sake of absolute clarity, no vote is scheduled to consider the Town of Weston’s offer to purchase the Weston Field Club. We are focused upon preserving this special place for the benefit of our members, families, friends and the community at large.”

The Situation "is Very Fluid"

The Board of Finance saw no reason to authorize a $75 thousand appropriation for an appraisal, property survey, title search, environmental assessment, and related tasks unless and until the Field Club accepts the offer. First Selectman Chris Spaulding agreed, noting that the Town’s ability to perform due diligence requires the club’s cooperation, especially for the extensive environmental analysis.

Finance Board member Allan Grauberd said the situation “is very fluid” and that there have been “very substantial communication issues.”

Much of the fluidity could be characterized as turmoil. Much of the turmoil could be attributed to the communication issues.

Since the Town’s offer became public, there have been major changes in Field Club management and leadership. Dan McNeill, the club’s president, stepped down. Mr. McNeill and his family are moving out of state. He has also resigned from the Board of Education.

The club’s general manager, who was the club’s principal point of contact in discussions with the Town for several months, has left. One other member of the club's Board of Governors has resigned. Mr. Colaprico advises us that both open board seats, Mr. McNeill's being one, were immediately filled by unanimous vote.

Discussion among club members about the possible sale appears to be heated, at least for some. To whatever extent it is a furor, the cause seems to be members first learning of the Town’s offer not from club leadership, but from Weston Today.

On social media, as one should probably expect, just about everyone involved has been accused of just about everything. The motives of the Board of Selectmen have been impugned. Former and current club leaders and managers have been maligned. So has, in a few cases, our reporting.

In one Facebook group, a club member posted an image, fabricated to resemble an official document, stating that club members had already voted not to sell. That was false. That same person then claimed “a lot of the stuff that was publicized in Weston Today was inaccurate at the very least.” The post was later deleted.

Those “substantial communication issues” were avoidable.

How it all Unfolded

We broke the story on June 5, when the next day’s Board of Selectmen agenda was released. That made the matter public. We contacted the First Selectman, who filled us in. We asked Dr. Spaulding if the club favors the sale. His response, as we reported that day, was measured: "Both parties are at least open to the idea.”

In preparing our report, we assumed club members were aware of the Town’s offer. Shortly after publishing, we were surprised to learn they were not. So was the First Selectman.

We now know that, earlier on June 5, the club’s manager had told Mr. Luiz in an email that a letter from club leaders to members was about to be sent. We don’t know if it ever went out. If it did, our report clearly got there first.

Given the reaction to our first article, we then filed a Freedom of Information Act (FOIA) request with the Town to obtain all relevant correspondence and documents. That was partly a formality. We have never encountered a situation where anyone at Town Hall was less than fully transparent. But we also knew it would trigger a review by the Town Attorney to make sure we were not given information that should legally remain confidential.

The Town took the extra step of requesting advice from the State Freedom of Information Act Commission, and then fully complied with our request. Our reporting has been based on a painstaking review of all correspondence and of every document. Everything we have reported has been thoroughly fact-checked in interviews and with other sources. If anything has been inaccurate or in error, no one has presented evidence to that effect. If they ever do, we will report it.

Is the Deal Dead?

We don’t know. Whatever upheaval that exists at the Field Club will eventually settle. In any transaction, the statement that something “is not for sale” is rarely an absolute. Club leadership’s statement that “no vote is scheduled” doesn’t necessarily mean none will ever be.

However, the Board of Finance decision not to act on the appropriation puts anything the Town needs to do at a standstill. Even if the Board had approved, there is little the Town can do until the club makes a decision.

Mr. Ezzes said, even if the club accepts the offer, he would not be willing to proceed until Town staff prepare a business plan that indicates how the club, as a Town facility, would operate and be financially feasible. Dr. Spaulding said the Parks and Recreation department participated in an ad hoc advisory group from the start and is close to completing such a plan.

We expect the plan will resemble Westport’s Longshore model, where the restaurant is outsourced and Parks and Recreation runs everything else. There, according to Mr. Ezzes, fees cover the costs of all or most programs and all capital expenditures, meaning “the Town isn't on the hook." Dr. Spaulding noted that Weston’s Parks and Recreation programs, except Bisceglie Pond and the Fourth of July celebrations, either break even or turn a profit.

Will This Drag on Forever?

It probably can’t. Unless the Field Club’s membership drive, which continues, attracts a large number of new members, or it economizes in some major fashion, or it receives donations, or it imposes an assessment on current members, or another buyer comes along and acts quickly, its financial pressures appear to remain a threat to its viability. Its ability to generate revenue from other services, such as events open to the general public, is severely limited by its tax-exempt classification.

To their credit, club leaders are energetically working to right the ship. They appear to need results quickly. Financial projections we believe were shared with all members forecast that even with another six-figure credit line draw, the club’s cash balances could go negative by September and approach a quarter million in the red by year end. An expensive well remediation project, which records indicate is State mandated, would apply even more pressure.

A significant increase in debt could exceed the bounds of the Town’s offer, or at least effectively void the intention to pay it off while still providing full refunds to members, thus making them whole.

Meanwhile, the Town’s door is still open. On Friday, Dr. Spaulding said: “We are completely open to talks with the club’s new leadership. There’s not much we can do on our own at this point to move forward. If the club wants to proceed, we will. In the end it would go back to the Selectmen and Board of Finance, and if it proceeds, the public will have their say.”

He seemed troubled that the club’s communication issues made the subject a source of contention. “When it became known to us the Field Club was in trouble, we worked in good faith with the club’s leadership at the time to be there to help, if the club needed it, to continue running pretty much as is, but possibly as a Town function.”

“They were in the middle of a membership drive and were obviously trying to survive. We respected their timing and interests. The record clearly shows that the idea that our offer was completely unsolicited and strategically timed for ulterior purposes, and that the club’s senior management and board were unaware, is simply not the case. I hope this all works out.”

Previous articles on this topic:

Editor's Note, June 23: In the first edition of this article, we wrote: "We are told, but have not confirmed, that some number of the club’s Board of Governors have resigned." We subsequently learned from Mr. Colaprico that, as the article now states, in addition to Mr. McNeill, one board member resigned, and both open seats were immediately filled.