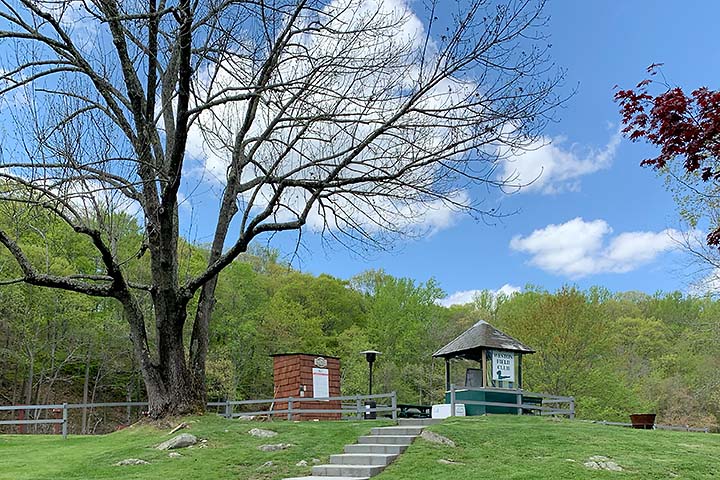 June 10, 2019 — It appears members of the Weston Field Club were among those taken by surprise last week with our report that the Town of Weston has offered to purchase the club.

In a letter to members at the end of the week, possibly in response to a negative reaction, Field Club leadership attempted to assure members that a sale was not a foregone conclusion and emphasize that a club decision would only be made by a vote of the membership.

However, the letter, written “to set the record straight,” also characterized the potential deal as “just in its infancy stages,” disputed press reports that “we are far along in the process,” and insisted the process did not begin until June 3.

With those statements, the letter may have inadvertently set the record un-straight.

By any practical measure, while not near completion, the matter is demonstrably far along in the process. The Town sent a letter of intent to the club in February. Extensive discussions and correspondence preceded and proceeded. At the Town’s request, the club submitted detailed information about its operations and finances, which were reviewed and discussed by an ad hoc group of advisors organized by the Town and by the Selectmen in executive session.

It is clear from our review of the record that none of this was communicated to club members, out of concern that the knowledge would discourage other potential buyers and possibly disrupt a spring membership drive.

The drive was not successful. We were surprised to see in last week’s letter a plea for continuing member recruitment, even with the Town’s offer now public to purchase the club and convert it to a town amenity.

It also appears some number of club members may not be fully aware of the club’s financial condition. Neither are we, at least to a level of precision.

Weston Field Club’s books are private, so our insight is limited. Efforts to contact club leadership over the weekend were not successful. But a review of tax filings, which for a tax-exempt entity are public, seem to indicate the club has endured financial stress for quite some time.

It appears the club has suffered six-figure operating losses in each of several recent years and has taken on increasing levels of debt. Much of the problem is apparently due to a decline in existing and new memberships.

New members pay a hefty initiation fee — a key source of revenue — regular dues, program fees based on services they use, and post a bond upon joining. The bond is refundable if they resign from the club, but only when a new member’s bond payment is made. With the drop in new enrollments, we understand some former members are still waiting, years later, for refunds.

In correspondence to the Town earlier this year, a club official summarized the challenges, saying “there aren’t enough young families in the area willing to pay the kind of dues it requires to run the facility as a private club for much longer,” and expressing the club’s hope that its legacy “isn’t selling the land or going bankrupt.”

The same concern is held at Town Hall. First Selectman Chris Spaulding told Weston Today over the weekend: “No one wants to see the Field Club close. We made an offer to prevent that from happening.”

Basis of the Offer

“It’s clear the club is in a challenging financial situation,” said Dr. Spaulding. “Our offer doesn’t preclude them from considering other options. It’s on the table if they want it. If they accept another offer or can continue to run it as a private club, that’s fine with us. We like the tax revenue.”

“What we would prefer not happen,” he added, “is the club being sold to a third party who tries to run it profitably, finds a year later they can’t, and then decides to sell it for development. The Weston Field Club is a valuable feature of our town. We don’t want to lose it. I see our offer as a backstop, the only guarantee that the club keeps running as a club and members get their money back.”

“I don’t want the club to fold and citizens to get hurt,” said the First Selectman. "I think it’s very fair to have the town take over the club, run it essentially the way it currently does, and do this by paying off the club’s debt and making members whole by refunding bonds and prepaid memberships."

“This strikes me as a win-win,” said Dr. Spaulding. “If the deal does happen, we are confident we can make it work. And everything we have heard from real estate experts says it would be good for home values if everything checks out.”