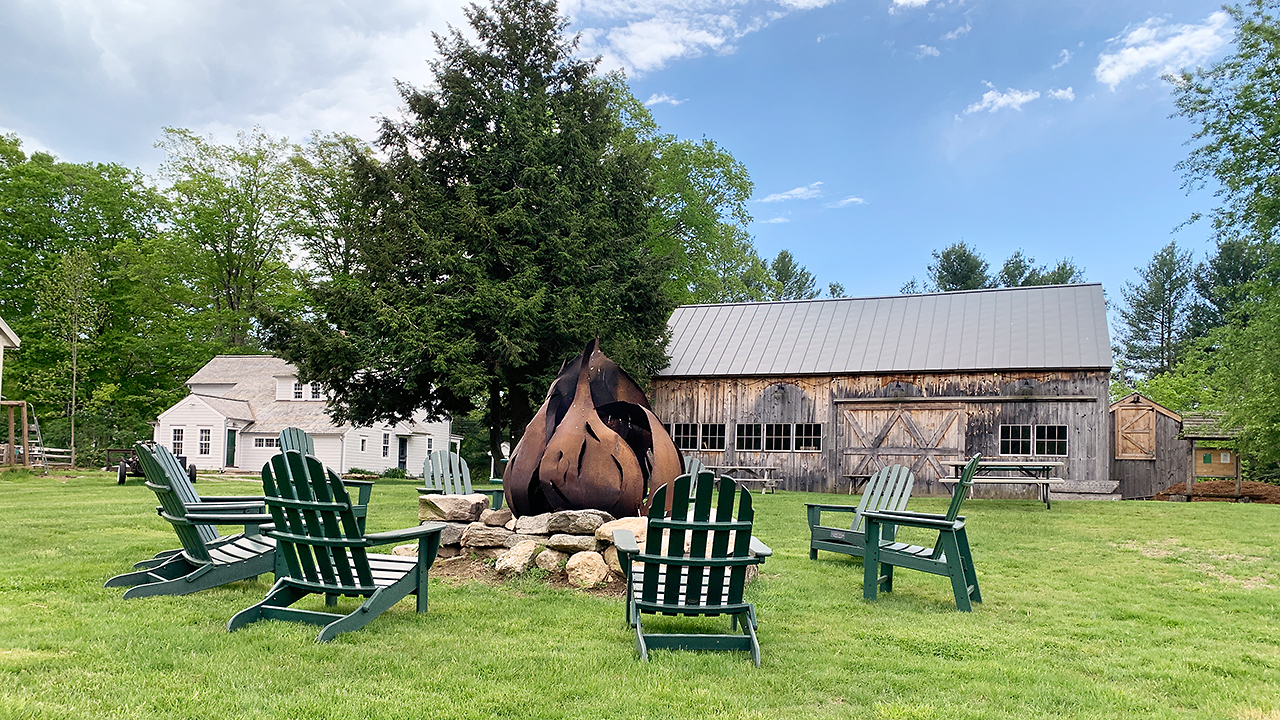 An agreement aimed at resolving issues between Lachat Town Farm and nearby homeowners will be subject to a public vote at a Special Town Meeting on November 6.

The agreement, intended to avoid a protracted battle that could endanger Lachat programming and the prospect of a new building, addresses neighbor concerns about the structure, the number and size of events, hours of operation, sound levels, and traffic. It also sets up an oversight committee, which has certain enforcement powers.

The meeting takes place at 1:00 on November 6 at the Weston High School stadium. The vote will presumably be by show of hands, as paper ballots and machine tabulators will not be used.

The proposed agreement, months in the making, first became public in a Board of Selectmen meeting on October 21. The meeting was open for questions and comment. Town Attorney Ira Bloom outlined the terms, First Selectwoman Samantha Nestor read into the record a brief letter from the neighbors. David Allon of Friends of Lachat provided additional perspective.

The agreement is between the Town, Friends of Lachat, and the owners of two properties: Jennifer Gruen, David Gruen, Julia Sears, and David Ambrose, who say they speak for all the homes on Walden Woods Lane and Old Field Lane, plus a few others. None of these other property owners are party to or bound by the agreement.

Under the terms, the size of the new building would be smaller than originally proposed by the Friends. There are limits on the number of Lachat events each year, their size and hours, and the volume of amplified music. Private events, an idea the Friends abandoned months ago, are forbidden for both the Friends and the Town. An oversight committee would have the power to levy fines if terms are violated.

“The best deal we could get”

At the meeting’s onset, First Selectwoman Nestor said, “a sign of any good agreement or negotiation is everybody not getting everything they wanted.” Those involved with Lachat seemed more resigned to the agreement than pleased with it, characterizing it at times as “the best deal we could get.”

The elephant in the room was the prospect that legal challenges would exhaust the patience of the project’s major donor, the estate of Daniel E. Offutt III. Earlier this year, the estate’s trustee offered $2 million toward construction of the proposed Agri-Culture Education Center, to be named for the late Mr. Offutt, on condition that the Friends of Lachat raise about $1 million from a number of other donors for remaining estimated costs. This the Friends accomplished.

Another condition, rarely noted publicly other than in passing mentions, was a deadline: that the project obtain all required approvals so construction could begin by the end of the year. Litigation would have made that impossible.

A draft of the proposed agreement can be downloaded here. The final version presented to voters will have minor corrections.

The terms reduce the size of the building first proposed by the Friends. The center hall shrinks by 20 percent, the kitchen by 15 percent, the pantry by 31 percent. Overall, 872 square feet are eliminated.

Limits are placed on the number of large events held at the Farm each year and each month, both in terms of maximum attendees and parked cars. Daytime events are to occur between the hours of 9:00 am to 5:00 pm. In the evening, the hours are 4:00 pm to 10:00 pm, with amplified music off by 9:00. Friends of Lachat are required to monitor and keep sound levels below a specified decibel level.

These limits would still be in force even if the proposed new Agri-Culture Center is not built, unless a halt comes from legal action by someone not an official party to the agreement.

The neighbors who are party have agreed to withdraw the challenge they filed with the Connecticut Attorney General, but if the Attorney General decides against the new building, the event limits stand. The neighbors agree not to oppose the project in upcoming Planning and Zoning and Conservation Commission proceedings.

The oversight committee would consist of five members. Two would be appointed by the neighbors that are party to the agreement, one by Friends of Lachat, one by the Selectmen, and one by unanimous consent.

The terms of the agreement would exist in perpetuity. The rights of the owners of the two properties who are party to the agreement — Dr. Gruen, Dr. Gruen, Ms. Sears, and Mr. Ambrose — would transfer to subsequent owners.

The oversight committee would have the power to impose on Friends of Lachat a $50,000 fine if a private event is held. The first violation in a given year of sound level restrictions would produce a warning, the second a $5,000 fine. Subsequent sound violations in a year would each be subject to a $1,500 penalty.

Decisions by the oversight committee could not be appealed to the Board of Selectmen or other Town bodies.

Mr. Allon told the Selectmen and public that the idea of fines originated with the Friends, an effort to bridge what he called “a gap in trust.”

Issues between Lachat Town Farm and some neighbors, mainly concerning traffic and noise, have existed for some time. Neighbors we spoke with said most were “smaller concerns” that were resolved.

But then, about a year after a celebrity wedding at the Farm produced traffic and sound levels some neighbors found disruptive, the Lachat Town Farm Commission proposed holding five such private events a year — the occasional wedding, bat mitzvah, or birthday party — to raise funds for maintenance.

The Selectmen, who had approved what became the celebrity wedding as a one-time private events tryout, tentatively gave the green light to more private events and programming guidelines, with the proviso that the Commission resolve differences with nearby homeowners.

All discussion by the Selectmen and Commission were properly noticed and public, but the neighbors felt they were inadequately informed and consulted. What emerged was the “gap in trust” Mr. Allon referred to, one that widened when the homeowners were advised of plans for a new building shortly before the plans were made public.

The neighbors say they felt blindsided. Lachat leadership said they had waited to present plans until detailed designs were created so discussions could be specific and informed.

In May, the Gruens, Ms. Sears, and Mr. Ambrose engaged counsel and filed a request to have the state’s Attorney General intervene, claiming that the new building and program plans — including many existing popular programs — violate Lachat Farm’s deed restrictions. A large public hearing held later in the month by the Lachat Town Farm Commission became acrimonious.

Later, the neighbors signaled an intent to challenge Lachat’s plans before the Planning and Zoning Commission, which has a say only about the building, not activities. They also filed as “intervenors” with the Conservation Commission, a legal standing that would have provided an avenue for judicial appeal if the Commission’s determination went against them.

Twice, both sides agreed to ask P&Z and Conservation to table the matter while negotiations continued.

Planning and Zoning now has the application on its October 27 agenda. The Conservation Commission will probably take it up in mid-November.