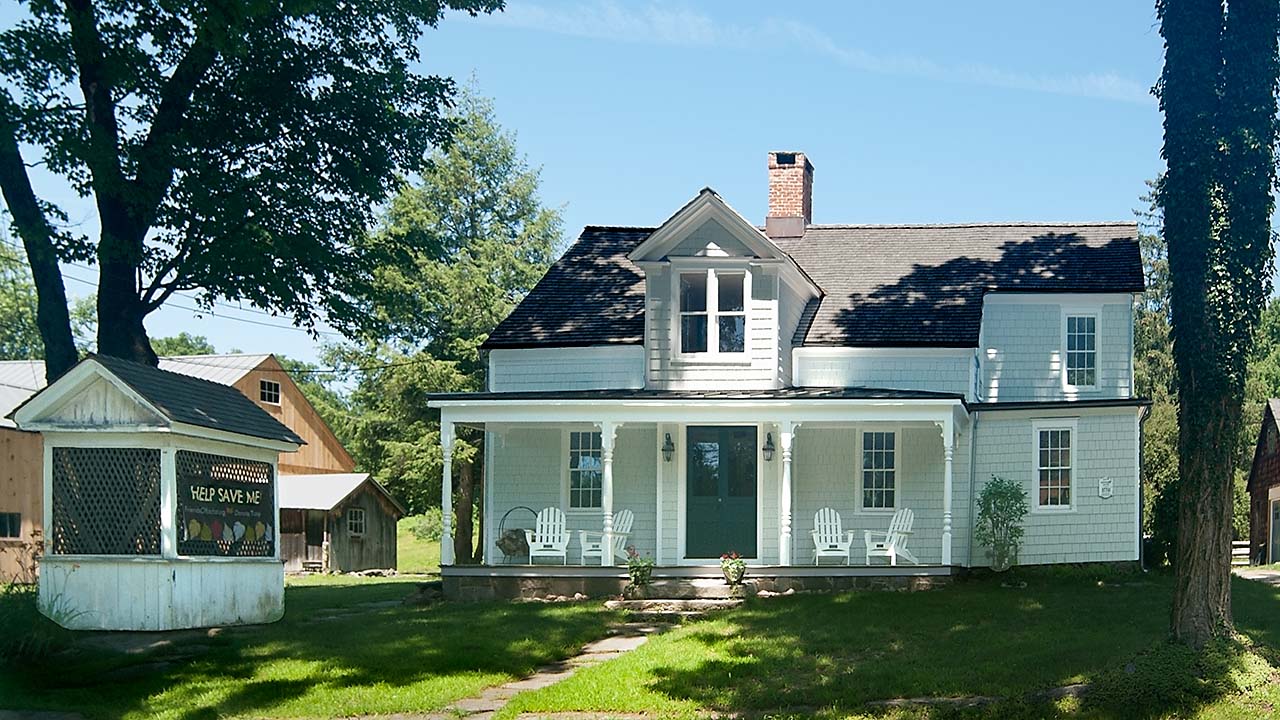 The plan is to build an Agri-Culture facility, a post and beam structure that would include a demonstration kitchen, an art studio, a Nature’s classroom, and open space for cultural and educational presentations throughout the year.

Friends of Lachat president Carol Baldwin said, “While the vast majority of our programming works well in summer months, this new building would allow us to offer indoor classes in cooking, canning, and nutrition while also giving us a four-season option for the classes we currently offer in Tai Chi, yoga, knitting, and other programs that fall within the Farm’s educational and spiritual refreshment guidelines.”

“At the outset,” said Ms. Baldwin, “we imagined a building that would blend seamlessly with the Farm and replace the dilapidated three bay garage, which was built in the 1950s and consumes a lot of oil every year.” Plans include connecting to an existing machine shop to provide indoor restrooms for visitors, coat storage, and room for an art gallery.

If completed, the building will be given jointly to the Town of Weston and the Nature Conservancy, which co-own the Juliana Lachat Preserve.

The idea began to take shape last year. Richard Orenstein, trustee of the estate of Daniel E. Offutt III, offered $50,000 to the Friends of Lachat to explore the concept, including design and engineering considerations and a review of approvals that would be required. Mr. Orenstein pledged $2 million to the project if all necessary sign-offs could be obtained.

Friends of Lachat enlisted the services of Rob Sanders, a local architect who specializes in renovations and buildings on historic sites, to develop architectural plans. Based on those plans, a construction cost estimator prepared detailed projections of costs for a project that would be aesthetically pleasing, consistent with existing buildings, and a model of sustainability.

All of that came at a price. The estimate amounted to $3.5 million, higher than hoped, partly due to increased material and labor costs, pandemic-related supply interruptions, and international trade tensions. It also included a substantial contingency fund and provisions for bond requirements.

“Skin in the game”

For the project to proceed, Mr. Orenstein asked the Friends of Lachat to demonstrate that the community would be willing to put “skin in the game,” and gave them a fairly short period of time to close the funding gap with substantial private pledges.

In less than two months, the Friends quietly solicited support in town from potential large donors, ultimately obtaining pledges amounting to more than $850,000. Over $200,000 was also pledged as designated in-kind contributions.

One such donation, for a teaching kitchen, was raised in the name of the late Selectman Brian Gordon, who passed away in 2018. Ms. Baldwin said the intention is to name the new space “Brian’s Kitchen.” Other residents have offered their services in acoustic design, landscape planning, sustainability, and cost management.

Ms. Baldwin said, “The outpouring of support in this early phase of development has been fantastic and speaks volumes about how vital Lachat Town Farm has become to Weston.”

Not a private event facility

Friends of Lachat are quick to point out that the Agri-Culture building is not intended to host private events, a touchy subject for some of Lachat’s neighbors.

Lachat Town Farm Commission chair Elizabeth Zeppernick said, “Whatever policy the town decides to create for private events at the Farm will apply to the new Agri-Culture building. It was not designed for private events, but instead designed for the educational programs that will continue to align closely with our mission.”

Earlier this year, the Commission asked the Board of Selectmen to allow the Farm to hold five private functions each year: one large event with up to 250 attendees, and four smaller ones with less than 100 attendees. The aim was to raise revenue for upkeep and maintenance of the Farm.

Lachat receives no taxpayer funding. All expenses are paid by a maintenance fund from an endowment, ticket sales from events, grants, and donations raised by Friends of Lachat, a 501(c)(3) organization.

The Selectmen approved the request, with conditions, among them that the green light was subject to informing Farm neighbors and addressing any concerns they may express.

At that point, communications seem to have become tangled. Some neighbors, perhaps those in homes beyond the 250-foot notification radius specified by the Selectmen, were not informed. Some later expressed frustration with noise, traffic, and parking on a private road during some Lachat events. At the same time, the Commission seems to have concluded that the new policy was a done deal, when it wasn’t quite.

A somewhat contentious discussion ensued at a Selectmen meeting on March 4. Some neighbors were frustrated that their concerns were not being heard. Ms. Zeppernick seemed frustrated that if the policy were in limbo, Lachat could not make commitments for private events. Lachat receives a large number of requests for private events, everything from small weddings to memorial services.

By the end of the meeting, the Board essentially told the Lachat Commission: work it out with the neighbors. As we understand it, discussions have been ongoing and progress may have been made.

Ms. Baldwin emphasized that the question of private events is separate from the proposed new building. “We are sensitive to the wishes of our Lachat neighbors,” she said. “No additional parking is planned for the Farm as a result of the new building.”