Paving Delayed as Plans are Reconsidered 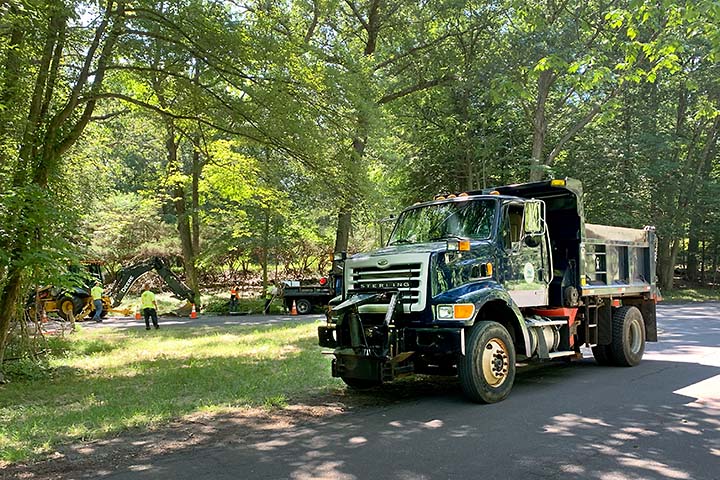 Paving on six poor-condition Weston roads, scheduled for this week, has been postponed, largely due to a disconnect between expectations and plans.

The expectation at Town Hall, based on descriptions in meetings and documents, was that the roads were to get the full treatment: surfaces milled down and two inches of new asphalt applied. Work was to occur on Cannondale Road, Old Mill Road, High Noon Road, Codfish Lane, and portions of Steep Hill Road and School Road.

As it turns out, less ambitious measures were in store. Milling would have been done only in spots and a pavement overlay put down. This is an economical approach, but not a long-lasting one, especially for roads in very poor condition.

“After a deeper dive,” First Selectman Chris Spaulding told Weston Today, “we may need a more robust solution. We will make sure this is done right.”

At the moment, there are differing opinions about how much work each road needs. There is also a lack of definitive insight about the condition and structure of some roads. As a result, the work was postponed, probably until mid-August, while plans are reconsidered.

Two weeks ago, the Town engaged an engineering consulting firm, Beta Group, to perform a detailed analysis later this year of all Weston roads, using sophisticated technical measurements. This will produce an ongoing maintenance program based on solid data.

Some of that work will now be done today. The Town has asked Beta Group to fully examine the roads to be paved this year and offer a neutral opinion of what should be done on each. There are basically three options.

The least expensive option is the approach that had been planned and was in line with available funds: partial milling in the worst spots and a new layer of pavement over the entire road. But the contractor, Tilcon, estimates this approach produces a lifespan of only five to seven years.

The middle approach is to completely mill each road and lay down two inches of new pavement. That has an estimated lifespan of 12 to 15 years.

The most aggressive (and expensive) approach is used on roads that are damaged beyond repair. It is full reclamation, essentially destroying the road and rebuilding it. The road is pulverized all the way down to the dirt, up to twelve inches of gravel are laid down, two inches of binder material are applied, and a two-inch top layer of asphalt is paved. That is expected to last 15 to 20 years.

Town Engineer John Conte examined Cannondale Road, took core samples, and does not believe the planned work would suffice. He has not yet determined how much work is needed on the other roads scheduled for paving this year. Beta Group’s analysis will help.

Tilcon, the contractor, has already submitted an estimate for reclaiming all six roads if that is found necessary. It comes to about $400 thousand over the budget, including funds that were added when unexpected State grants arrived.

Town Administrator Jonathan Luiz told the Board of Selectmen on Thursday evening that this could require difficult choices be made, and soon. One option is to request that the Board of Selectmen and Board of Finance allocate supplemental funds. Another is to scale back the scope of this year’s work. When decisions are made, a new paving schedule will be set.

Editor’s note: A tip of the hat and our thanks to Weston Today reader Bruce Mullen, who contacted us after receiving information suggesting that plans for paving Cannondale Road were not in line with expectations. We sought confirmation from Mr. Luiz. The “deeper dive” was partly a result of his examination, Mr. Conte’s work, and our inquiry, which was fully a result of hearing from Mr. Mullen.