Board to Decide on Plastic Bag Ban and Other Ordinances 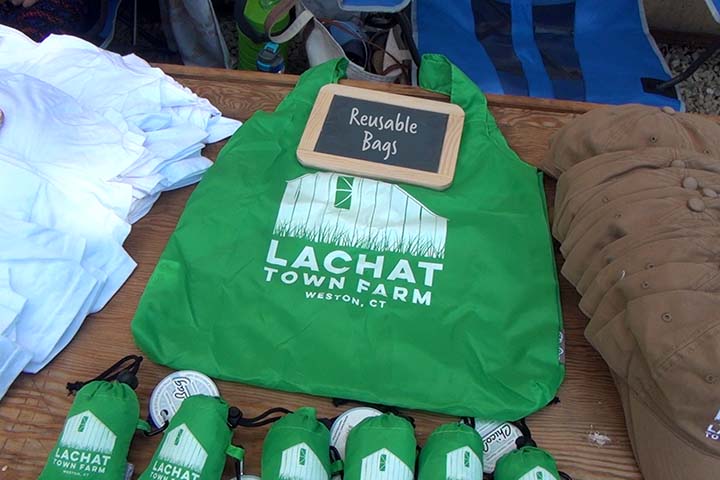 October 2, 2018 — On Thursday evening (October 4), the Board of Selectmen will hold a public hearing on four new or revised ordinances. Three are somewhat technical, but one is major, as it would ban single-use plastic retail checkout bags in Weston's stores. The hearing is at 7:30 pm in the Town Hall Meeting Room.

The plastic checkout bag measure was brought forward by the Weston Sustainability Committee, which often refers to it as the "BYO" ordinance, because it is meant to encourage you to bring your own reusable shopping bags when you shop. If you don't, at checkout, the store can only provide you with either a reusable bag or a recyclable paper bag. The store is required to charge you at least ten cents per bag.

That money is the store's to keep. It is largely meant to offset their additional costs. Plastic checkout bags are attractive because they are cheap and take up much less storage space than paper. Unfortunately, they are very bad for the environment. They take forever to biodegrade in landfills. They easily find their way to the oceans, where they are a major contributor to the notorious floating islands of plastic that threaten ocean life and our food chain.

Reusable bags require forming what may be the new habit of making sure you have them on hand when shopping. But they are clearly the most eco-friendly solution. Recyclable paper bags are better than plastic, but only slightly if they are not, in fact, recycled. As we understand it, the Sustainability Committee plans to launch a public awareness campaign for reusables if the ordinance is enacted.

Lachat Town Farm sells a very attractive reusable bag (pictured above) which is very light but very strong. Using a self-contained pocket, it folds up into a small ball, making it easy to have one or more available at all times. At $10 a piece, they're not cheap, but they last years and years, even with frequent cleaning, and the proceeds support the farm.

We started reporting on this topic three days after Weston Today launched, when Dr. Larry Shore raised the question at the League of Women Voters Speak Up event in February. For additional background, please see our articles here and here.

You can download a copy of the draft plastic checkout ordinance. The sections in red text are additions to previous drafts. The lines struck through in red were deleted from previous drafts.

The three other ordinances on the docket for Thursday's hearing have to do with town code violations.

One amends the existing Chapter 39 ordinance to provide a general structure to penalize code violations with fines. At present, the Town has limited ability to do so. This draft is also available for viewing and download online.

A second act amends Chapter 145, and specifically gives the Town the ability to fine residents who fail to remove unregistered abandoned vehicles from their property. Very short, available online here.

The third is a new ordinance, and has been drafted to meet a State requirement that the Town deal with situations where pollutants are discharged into storm drain systems. It spells out the Town's obligations to monitor systems, act upon reported cases of spillage, and enforce its provisions. Long and complicated, online here.

Originally, the Board planned to hear public input on Thursday evening regarding a proposal to ban fracking waste from Weston's borders. It was withdrawn, at least for the time being.

Without doubt, fracking waste is nasty stuff. It contains dangerous chemicals and may contain radioactive elements. If it were transported on Weston's roads, a spill would be catastrophic.

The Board of Selectmen has been considering the matter all year. Generally, the case made for a ban is to prevent some future cash-strapped Town administration from accepting millions of dollars in exchange for permitting fracking waste to be stored or processed here. The case against is that it is a nullity. There is no fracking in Connecticut, and the state currently has a moratorium on the import and transport of fracking waste.

Existing State regulations are limited to fracking waste produced by natural gas extraction. The draft ordinance presented by the Sustainability Committee, derived from a model by an environmental organization called Food and Water Watch, would have extended the ban to include waste from oil extraction, even when it comes from conventional drilling. It also would have prohibited Town contractors from using products that contain such material. That's where things got complicated.

Did the proposal overreach? Could there be unintended legal consequences? Tar may be made from oil. Would contractors be unable to use tar to repair Weston roads? No one seemed able to say for sure. Food and Watch Watch insists that none of the nearly 50 towns and cities that have adopted their model have encountered legal issues, but we were unable to find a case where those ordinances had been tested.

Town Attorney Ira Bloom recommended that the Board consider a far less expansive model offered by the Connecticut Conference of Municipalities (CCM). It more closely adheres to State regulations, but includes fracking waste from both natural gas and oil extraction. It does not extend to non-fracking related waste. A brief from Food and Water Watch argues that the CCM model is obsolete. CCM, as we understand it, advises member towns that the Food and Water Watch version poses serious unforeseeable risks and could paralyze economic growth. In the end, the Sustainability Committee asked the Selectmen to withdraw its proposal and allow time for further review.

The first edition of this article's section on fracking waste identified CCM as the source of the model ordinance used by the Sustainability Committee. That is not correct, and we regret the error. The actual source was Food and Water Watch, as described in this edition. Mr. Bloom advised the Selectmen that the CCM version, which has not been offered by the Committee or discussed by the Selectmen, "strikes an appropriate balance between the environmental and logistical concerns."