Police Board Confronted on 911 Call and Response 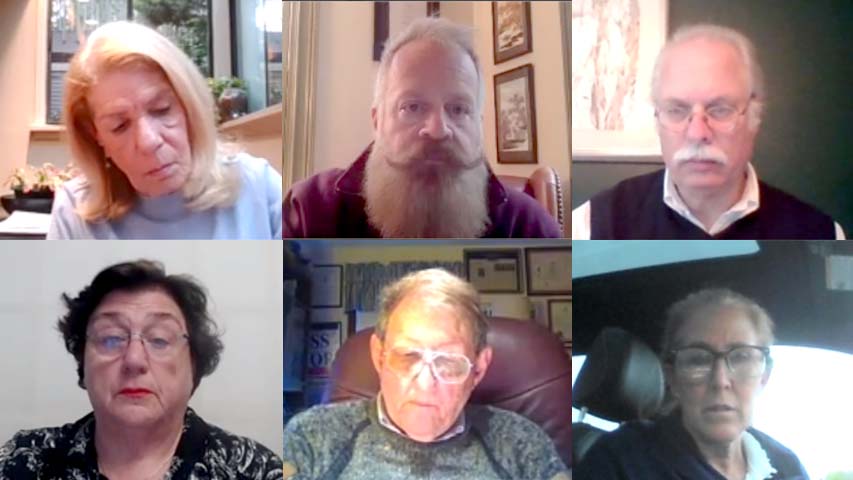 A 3-½ hour meeting of the Board of Police Commissioners on May 6 had one topic: a 911 call in November of 2019, the conduct of the Weston police officer who responded to the call, and the response by police authorities to a complaint by Walter Simpson, the subject of the 911 call.

Mr. Simpson, a Black Weston resident, had been collecting his mail and waiting for his child’s school bus to arrive. The 911 caller said, “he just looks suspicious to me.”

The major elements of the incident, first described in a Weston Today Letter to the Editor, are not in dispute. The 911 call was placed, an officer confronted Mr. Simpson, who lodged a complaint the next day with the Chief of Police about the officer’s conduct which, according to Mr. Simpson, was “aggressive.”

Possible explanations for some of those elements have been put forth. But, so far, there is no clear explanation of why Mr. Simpson’s complaint languished for 17 months.

The next Board of Police Commissioners meeting takes place on Tuesday, May 18. In a statement, Commission chair Beth Gralnick said the board will “review and consider the topics raised at the May 6 meeting and set a plan for further discussions on steps to be taken going forward.”

The May 6 meeting drew over 400 attendees. Afterwards, Mr. Simpson said he found the turnout and support “an emotional experience, almost overwhelming.” There were times, he said, “my eyes welled up.” In a Letter to the Editor on May 9, he and his wife, Aria, thanked those in Weston and other places who participated.

The meeting began with Mr. Simpson proposing measures that “aren’t just recommendations that would benefit Black and brown families. They would benefit all of Weston regardless of race.”

He called for the adoption of an ordinance that would penalize “racially biased 911 calls,” continuous implementation of a police engagement program to foster relationships between officers and the community, and the establishment of an independent civilian review board.

Mr. Simpson also briefly recounted the events of November 21, 2019 and their aftermath.

Despite his compliance, said Mr. Simpson, the officer responding to the 911 call was “unnecessarily aggressive, unnecessarily disrespectful, unnecessarily escalated it, and for me, his hand was a little too close to his gun.”

“This obviously made things uncomfortable until my neighbor, who happens to be white, spoke up on my behalf.”

The neighbor, David Farabee, spoke briefly at the meeting. He said, “I just want to vouch for everything Walter said. Everything happened exactly as he described. And he handled it much better certainly than I would have.”

Mr. Farabee’s wife, Angela Hawken, read portions of an email she had sent to town officials the day after the incident. It described what happened and said “we are outraged that our neighbor and his family, who epitomize everything Weston should want in our community, was allowed to be embarrassed and insulted in this way.”

In our interview, Mr. Simpson said he is extremely grateful for these neighbors, who corroborated his account and “took a weight off my shoulders.”

But, a year and a half later, he is still shaken by what happened. He told the Commission he isn’t afraid to check his mailbox, but thinks every day about when he can do so without risk that the police will be called. He told us “it will be a while before I can go jogging again and feel safe.”

In our interview, he said he remains concerned about what would have happened if his white neighbor hadn’t vouched for him or if a relative were visiting whom the neighbors may not know.

Mr. Simpson also told us about his initial reluctance to file a formal complaint. “Where I grew up,” he said, “you don’t tell on anybody. And you never tell on the police.”

Nevertheless, he met with Police Chief Ed Henion and described what had happened. By the accounts of both men, the meeting was cordial, respectful, and at least seemed to be productive. Chief Henion arranged for Mr. Simpson to have a copy of the 911 call.

It appears the meeting ended with different impressions of what would happen next. According to Commissioner Gralnick, Chief Henion thought the matter was closed.

Mr. Simpson left believing the meeting was all that was needed to launch an investigation. “So I waited,” he said.

It was not until eight months later that Mr. Simpson was told on a Zoom call attended by Ms. Gralnick and Police Captain Matthew Brodacki that his oral complaint was not viewed as an official one and that no investigation had taken place.

Later in the meeting, Commissioner Peter Ottomano said Weston Police policy is that an oral complaint is valid and should result in an immediate investigation. He said the Commission will look into what happened, that it “should have been a lot better," and will work to improve.

“Did I have to get shot first?”

Mr. Simpson said that, after the Zoom call, he submitted complaint forms and witness statements. He said it took six months for a reply to arrive, an email from Captain Brodacki saying his complaint was closed based on “updated information from neighbors.”

He later learned that neighbors had not been contacted and that his complaint had been deemed “unfounded,” meaning the Police Commission had decided the officer’s conduct did not violate Police Department policy.

Mr. Simpson said a subsequent meeting with Commission chair Gralnick had seemed productive, but in a follow-up, his encounter with a “not warm and fuzzy” police officer was dismissed as “only five minutes.”

Mr. Simpson said his call for a civilian review board is a direct result of the course of action — or lack thereof — on his complaint.

“On that day,” he told the Commission, “nothing physically violent happened to me. My question is: is that what had to happen first in order for the Weston Police Department to take my complaint seriously enough to follow up with my witnesses? Did I have to get shot first?”

When Commissioner David Muller contended that members of the Police Commission, being citizens elected to their positions, are in effect the civilian review board, Mr. and Ms. Simpson immediately disagreed. They argued that a review board must be independent of the Police Department and of the Commission, which runs the department. (The Chief of Police is the only Town department head who does not report to the First Selectman or Town Administrator.)

It is not a sure bet that the Commission has the authority to form a civilian review board in the first place. That power is most likely vested in the Town, perhaps subject to public vote.

After Mr. Simpson’s remarks, Chairwoman Gralnick apologized to Mr. Simpson on behalf of Commission for the "distress caused to you and your family." She said steps already taken over the past year to improve interaction with police will continue. Other commissioners agreed with her statement.

Then it was the public’s turn.

Out of dozens of those who spoke, several friends and neighbors of Mr. Simpson spoke glowingly of his character. “If Weston was made up of 10,000 people,” said one, “you would want 10,000 Walter Simpsons.”

The harshest remarks were reserved for the police and for the Commission, with calls for some or all members to resign, particularly Ms. Gralnick.

Commissioner Susan Moch came under intense criticism as well, after reacting visibly and audibly when an anonymous speaker declared “the members of the Weston police department are racists, they’re white supremacists, and perhaps the commission as well,” then adding, “you do not want Black people in Weston.”

Ms. Moch objected to being grouped with racists and white supremacists. Later, a speaker replied, “You say you don't like being grouped in? How do you think we feel? How do think Black men feel?”

Some related their own encounters with racial bias in town and spoke of worries about being out at night for a walk or a run. Some said their children had experienced bias in Weston schools. One spoke of her Asian father who, on a visit, enjoyed a smoke on the front porch, and someone called 911.

Several expressed hope that the attention and outcry about what happened to Walter Simpson would be a wake-up call about racial tensions that some may not even know exist, whether they involve the police or not.

One was Reverend Dr. Bernard Wilson, Senior Minister of Norfield Congregational Church and, for the last 15 years, chaplain of the Weston Police Department, which he admires.

“I would like every police department to be like Weston,” he said. But “as an African American male, I live in the reality that there is a tension between police and people of color … and black men in particular.”

“If we are ever going to move forward … it will require that we hear one another, respect each other, be willing to own our mistakes both past and present … and that every citizen walks away from an encounter with a police officer feeling respected.” We can, he said, “make our community not just better, but a model for other communities.”

Another expressing hope was Walter Simpson. When concluding his earlier remarks, he said, “let’s start the conversation and try to take something that was so ugly and turn it into something positive.”

“I never wanted any of this,” he said in our interview. “I never wanted to be the center of attention. That’s not me.” He said he was gratified by the support and encouraged. “There’s still a lot of work to be done,” he said. “But at the end, if we can all be better for this and patch a few holes, it’s worth it.”

In her remarks early in the meeting, Aria Simpson was thankful for “the outpouring of support.” Ms. Simpson said, “It really shows the goodness of this town and the goodness of the people." She said the family is relatively new in Weston, and having arrived just before the onset of Covid-19 and the isolation that came with it, do not know many people.

So, “When you see us,” she said, “please say hello. Please let us know you’re there.”