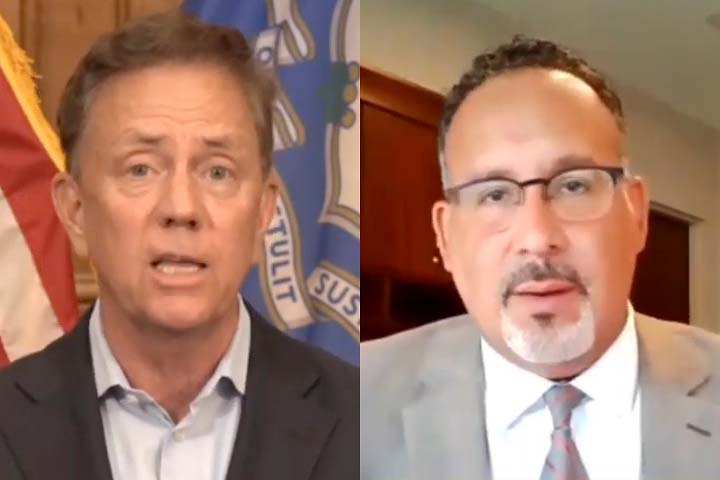 Decisions about how to reopen schools in the fall will be made by local school districts. Asked several times at a press conference this afternoon, Governor Ned Lamont and Education Commissioner Miguel Cardona were consistently unequivocal: "districts will make the determination."

The matter came into question last week when a memorandum from Dr. Cardona was taken by some as a signal that full reopening would be mandatory. That was apparently unintentional. As we understand it, the intent was to mandate planning for all options, not implementation of any one.

Governor Lamont also said the issue of whether distance learning counts toward the annual statutory requirement of 180 days of classroom instruction will be addressed either by executive order or legislative action. (See our July 24 report.)

Today's clarification suggests that the "go sign" the governor hopes to give in August will likely be an affirmation that districts should proceed as they see fit. At the same time, the governor clearly retains the right to flash a no-go sign, to tell districts what they cannot do—resume in-person classes—if public health metrics turn sharply negative.

The ultimate go sign will be given by parents.

Governor Lamont and Commissioner Cardona were also unequivocal today that parents have the right, at any time, to decide that their children not attend school in person, but learn at home, online. The option is being referred to as "voluntary distance learning."

It is not clear how and whether those studying this way would be able to participate in extracurricular activities such as sports.

Districts are allowed, apparently encouraged, to use different reopening models at different schools. The hope expressed at today's press conference was that at least students in grades K–5 will be able to learn mostly or completely in classrooms. At those levels, social and emotional needs are viewed as most acute, prolonged mask-wearing seen as more burdensome, but cohorting believed to be most possible and effective.

At higher grades, particularly at high schools, Commissioner Cardona acknowledged that "the hybrid model may be more feasible." He added that many districts will undoubtedly start with the hybrid model.

Where it goes from there will remain a question for some time. "These plans are fluid," said the commissioner. "We have to shift the thinking and belief system of public education."

Governor Lamont recalled expectations voiced on July 16 by former FDA Commissioner Scott Gottlieb, who said he is optimistic some degree of in-person school can occur "for a while."

"We've bought ourselves a couple of months," said Dr. Gottlieb. "We should get in as much school as we can when we can."