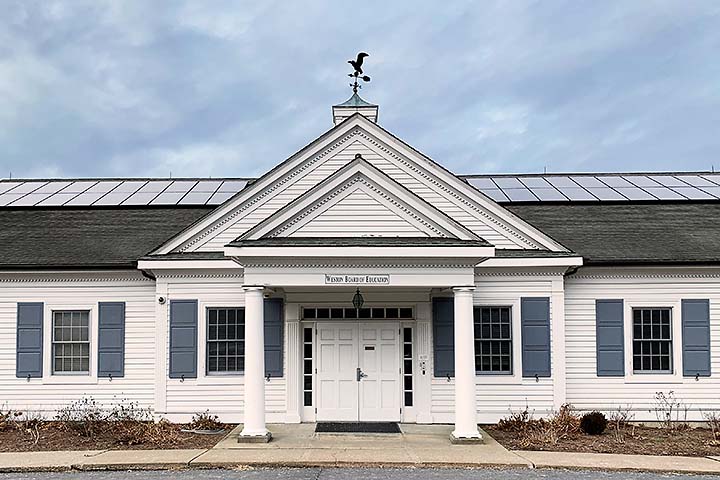 In less than ten days, a task force consisting of Board of Education members, school administrators, various officials, educators, and parents must complete plans to reopen Weston schools in the fall. The plans must be submitted to the Connecticut Department of Education by July 24.

The task force must specify how schools could operate in three different models. Each model has its own set of complexities, all are potentially intertwined, and the most relevant question—how much of a threat COVID-19 will be six weeks from now—is unlikely to be answered until the last minute. Even then, the answer is subject to change.

At the moment, "there is not a district in Connecticut that knows how we're going to open," Superintendent William McKersie told the Board of Finance in a briefing last week.

State guidance largely represents a philosophy local districts are encouraged to implement. A follow-up to a Department of Education framework issued on June 25 amplified the philosophy but contained few specific directives, leaving local districts to fashion approaches that meet their own circumstances.

"Decisions have been pushed down to districts," said Dr. McKersie.

The three models that must be fleshed out are: full on-campus in-person education, a hybrid of on-campus and online instruction, and 100 percent online learning.

The hybrid model is generally viewed as the most likely scenario for the fall. District plans will have to anticipate shifting from one model to another as conditions require. They must also be able to accommodate parents who may not be comfortable sending children to school just yet.

Board of Education chair Tony Pesco said a recent survey indicated most parents want their children on-campus in the fall, if possible, but about a quarter either did not or were not sure.

Dr. Pesco said plans in Weston will be developed on a school-by-school basis to provide the most effective curriculum for each age group. The plans will also take into account potential costs, including those for personnel, facilities, and transportation.

Transportation will be the big number.

School district Finance Director Phillip Cross told the Board of Finance that preliminary cost estimates indicate the schools will need to spend about $123,000 extra for technology and an additional $100,000, over time, for sanitizers and personal protective equipment.

Transportation could add as much as $1.7 million to district expenses.

That figure appears to be a worst-case amount. Whether it becomes the real-case amount depends partly on how closely the district decides it must adhere to recent CDC guidance on school buses. The State issued no requirements, except to say students and drivers must wear face coverings.

The $1.7 million is based on the district taking the most conservative approach, having only 12 students on each bus instead of the maximum capacity five or six times greater. Riders would be seated diagonally, one student per seat. Each bus would have a monitor. 13 more buses would have to be added to the fleet. Whether qualified drivers could be found is an open question.

Dr. McKersie estimates that, currently, about 60 percent of students take the bus, but by law the district must provide transportation for all. There is no telling how many will ride in the fall, which means Weston Police will have to prepare for an unusually high number of drop-offs and consequent traffic issues. Dr. McKersie said this alone could force the district to stagger school start times.

Another complication would be whether students are grouped into cohorts at school. As it is, Dr. McKersie told the Board of Finance that cohorting becomes considerably more challenging from an educational perspective at the middle and high school levels.

The State recommends using that approach as much as possible, the object being to avoid closing schools entirely in the event of an exposure. If only one student were infected, only his or her cohort could be quarantined while the rest of the school carries on.

The problem is that this kind of containment is completely effective only if students are also transported as a cohort, which adds complexity to the task of scheduling bus routes. It could also entail even greater costs.

"How to pack buses is a big issue everywhere," said Dr. Pesco.

Among the many other issues to be addressed by the task force are those concerning staff. Some teachers, especially those in at-risk categories, may be unwilling or unable to be physically present at school. The district is exploring whether they could be dedicated to distance learning.

Efforts are underway to improve distance learning programs, possibly to include livestream classroom sessions for those studying at home. Asked by a Finance Board member how well online education was delivered and received in the spring, Dr. McKersie said, "We've done well, and we can do better."

When will we know?

At a press conference on July 14, Governor Ned Lamont said he is closely monitoring key metrics, with a special focus on whether the rate of infections begins to accelerate.

"So far, so good," said Mr. Lamont. Currently, Connecticut's percentage of positive COVID-19 tests is less than 1 percent, one of the lowest in the nation. In early August, said the governor, if the metrics remain favorable, "at that point we have a 'go' for September."