Speak Up: What We Learned 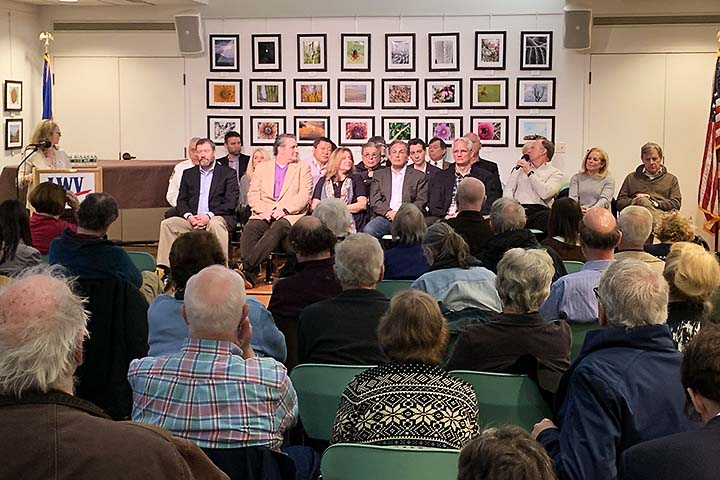 Saturday's annual League of Women Voters Speak Up event drew a capacity crowd — and then some — at the Weston Library Community Room. Members of the Board of Selectmen, State legislators, commission and committee chairs, and other officials answered questions and heard the community's views.

The range of topics was broad. Here is what we learned:

Faced with rising built-in costs, both the Town and the school district seek efficiencies 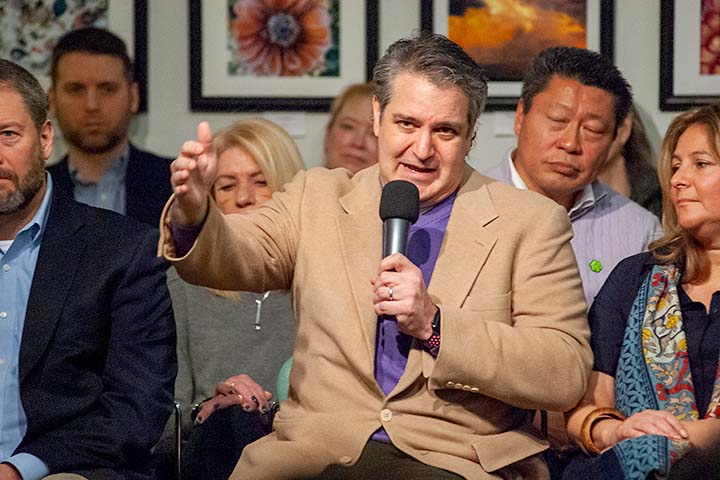 Dr. Spaulding said the administration continues to vigorously seek grants and is actively exploring sharing services with other towns. "We're talking to everybody about everything," he said. 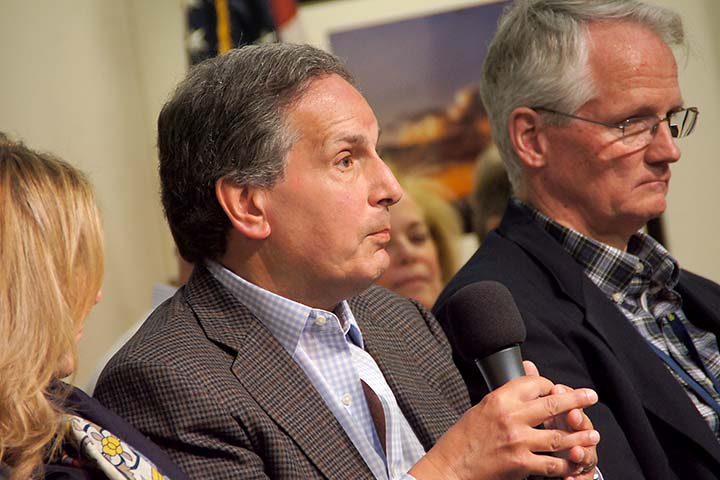 "We are really at a crossroads," said Board of Education chair Tony Pesco. "Everyone wants to maintain the quality of education, which unfortunately comes at a price."

Referring to both the district's administrative structure and facilities on campus, Dr. Pesco said "a more strategic view is needed of what kind of school district we want and how we are going to deliver education." 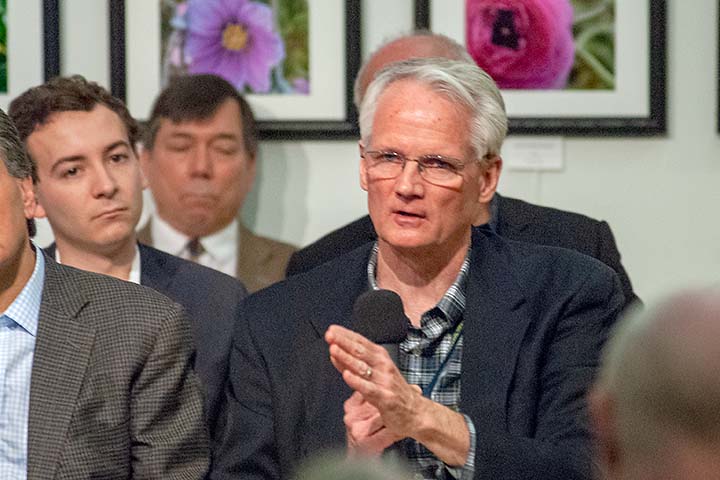 Concerned about what he believes is "a narrative in Weston that our performance is slipping," Superintendent William McKersie cited the State Department of Education report card, released on January 30, rating Weston High School as number one in the state.

Scores on the report card are largely based on standardized test performance, rates of absenteeism and graduation, college readiness, and access to arts and physical fitness. Dr. McKersie said the report scores Weston Intermediate School well above average and Weston Middle School at about the average. Overall, he said, Weston is "in the mix of top districts," and is "still the beacon for what everyone else looks at for performance."

The mill rate will never be as low as Westport's

Weston's mill rate rose to 32.37 last year, largely due to the five-year property revaluation that eroded the town's taxable base. The rate does not compare flatteringly to that of other towns, but such a comparison may not be entirely fitting. 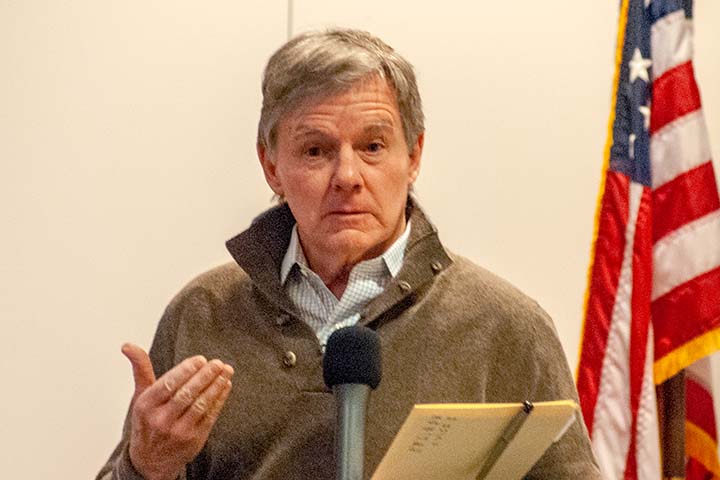 Finance Board chairman Steve Ezzes offered perspective. "The farther you get away from commercial space and a transportation center, the greater the mill rate." However, he pointed out that Wilton, which has commercial space and access to a rail line (not entirely conveniently), "has a mill rate approaching 30."

"We're not going to be Westport," said Mr. Ezzes. "We can't be. We just don't have the same economic makeup, between residential and commercial. We are much more like Wilton, or Redding, or Easton." He said conversations with his counterparts in those towns are ongoing, as each must also plan "for what the State may or may not do to push costs further down" to municipalities.

First Selectman Spaulding said, "We expect our State representatives to fight strongly" against further costs being imposed on Weston. 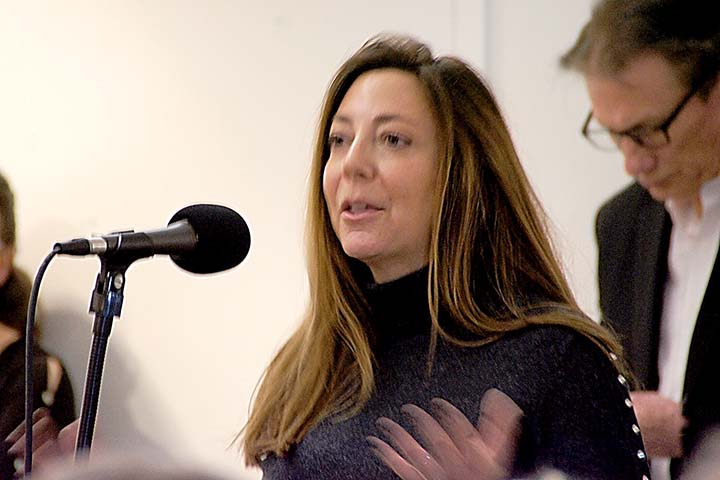 In a related vein, Former First Selectwoman Gayle Weinstein asked the legislators what they plan to do to get State money flowing back into Weston and neighboring towns.

Over the last five years, said Ms. Weinstein, reductions in State assistance have cost Weston $1.2 million in education funds and $250,000 in Town Aid Road grants, which help municipalities pave roads and plow in winter. "It's hard to do more when you're getting so much less," she said, and noted that at least 78 unfunded State mandates that existed while she was in office are still in place. 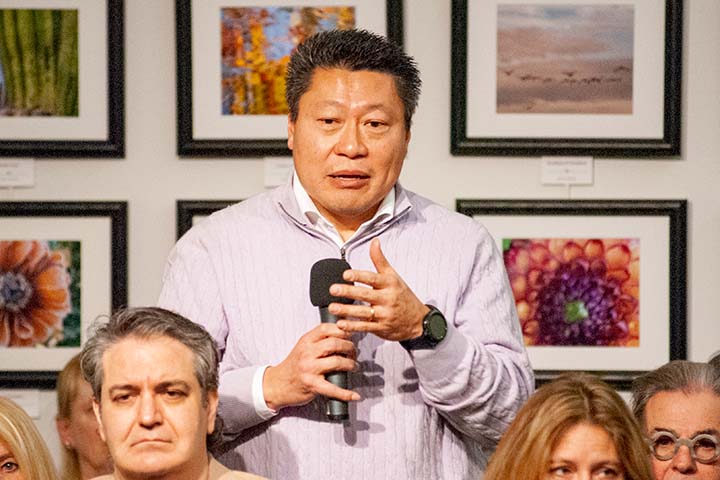 State Senator Tony Hwang responded that Hartford should do a better job listening to towns, and that "there has to be a tremendous sense of urgency that we can no longer tax and spend."

Representative Anne Hughes said the State needs to provide incentives for school districts that economize, ways they can "get more money when demonstrating cost efficiencies." 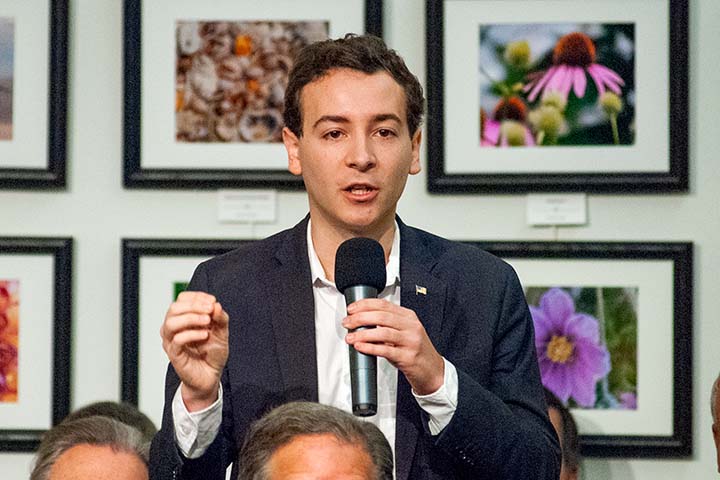 Senator Will Haskell said one mandate he hopes to eliminate is the requirement that towns publish public notices in print newspapers. A bill he proposed last year would have allowed towns to meet the need on their websites. It ran into stiff opposition, he said, from "newspaper lobbyists."

"Taxpayers in Weston are forced to spend tens of thousands of dollars every year advertising public notices in really costly newspapers which don't have a big circulation here," said the senator.

Realtor David Weber asked about plans to create a Village District in Weston. 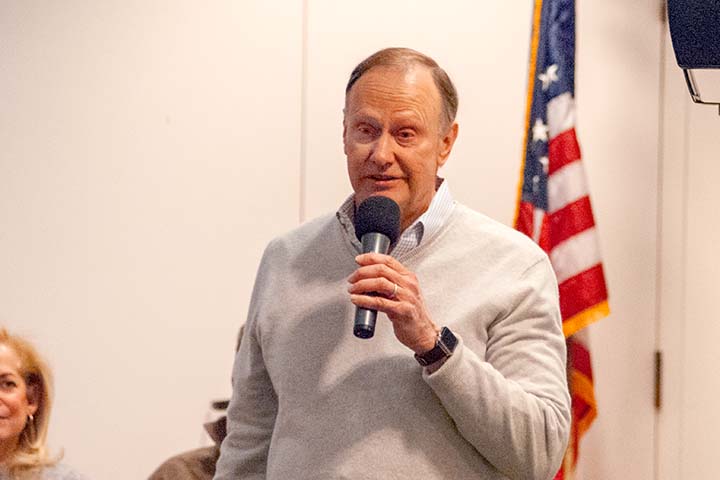 Planning and Zoning Commission chairman Ken Edgar said the new long-range Plan of Conservation and Development, which will be the subject of a public hearing in April, addresses the possibility that future zoning action could be taken to create a Village District in the town center. He noted that the desire for development of amenities and sidewalks was strongly expressed in the recent town-wide survey.

Designating a Village District, said Mr. Edgar, would "allow us to control the nature of that development" by setting architectural standards. 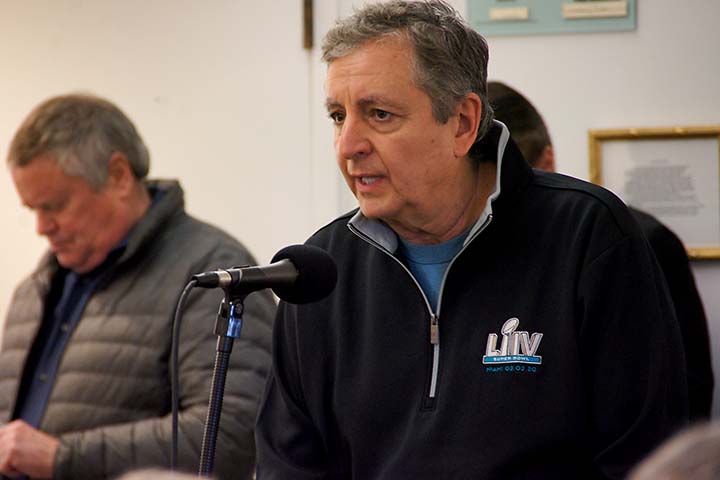 Police Commissioner Jess DiPasquale asked if there were plans to shift school sessions to a later start time. Dr. McKersie said many districts are looking into it but, other than Greenwich, few have made the change.

The superintendent said a task force studying the subject will soon report recommendations to the Board of Education. He said an 8:30 start would probably be disruptive, especially for after-school activities, but that 8:15 "might be the sweet spot."

Asked if the change would be made next school year, Dr. McKersie said it would be up to the Board of Education, and noted that, in Greenwich, "it took a while" to stabilize after making the change.

There is general agreement, including from credit rating agencies, that Connecticut's renaissance will require a greater supply of tech-savvy workers, fiscal stability, and transportation improvements.

A question about restoring the state's appeal to industry provoked a bit of sparring between senators Hwang and Haskell, although the former noted that the two worked together to pass legislation to help private colleges "quickly adapt programs that fit the needs of businesses looking for talent pools."

Senator Hwang said he worries about the business impact of legislation passed last year to raise the minimum wage and create a paid family leave program, while acknowledging they are "essential for quality of life." He objected that the legislature established "another State commission" for paid family leave, instead of following California's model, which relies on private insurers.

Senator Haskell pointed out that the plan, which will be phased in, departs from the California approach in another key aspect: Connecticut employers do not have to contribute to the fund. The program will be financed by a one-half-of-one percent payroll tax.

Senator Haskell said the legislature took business-friendly steps last year: the "small step" of eliminating the business entity tax and the big step of a budget that "provides fiscal stability and stops the bleeding." He also lauded a bipartisan measure enacted to simultaneously address the student loan crisis and build the talent pool by giving a tax break to companies that help students pay off their debt. "Both sides like it," he said. 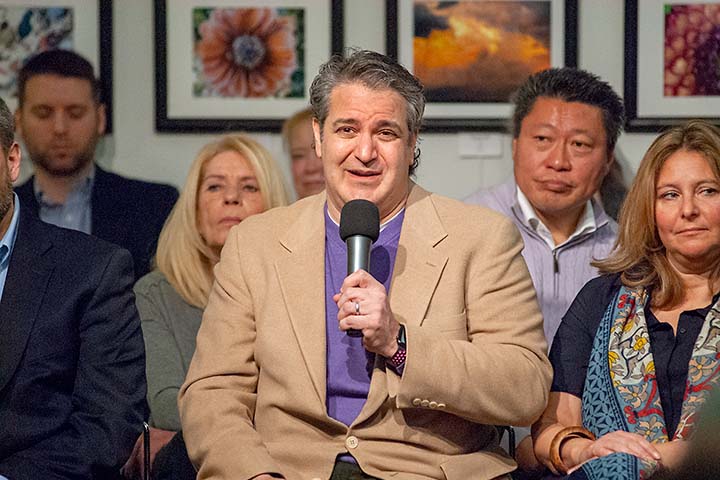 First Selectman Spaulding described the status of the sidewalks project. A committee's work has proceeded apace, and last week the Selectmen approved a landscape architecture contract (provisionally) to design the first phase, which connects the Town Hall complex and the schools.

A grant has been approved for the second phase, which will extend sidewalks from Revson Field up Lords Highway to Old Hyde Road. It will also reconfigure the intersection of Route 57 and School Road. The Department of Transportation has a big say on exactly how that is done. Funds won't be released until the State finalizes an overall bonding package, which is tied up with the ongoing question of how to pay for infrastructure improvements, possibly in part with tolls on big trucks.

Federal funds for a third phase, which would complete the loop down Old Hyde to Norfield Road, and then back to the Town Hall campus, require passage of overall infrastructure legislation in Washington, a distant prospect. 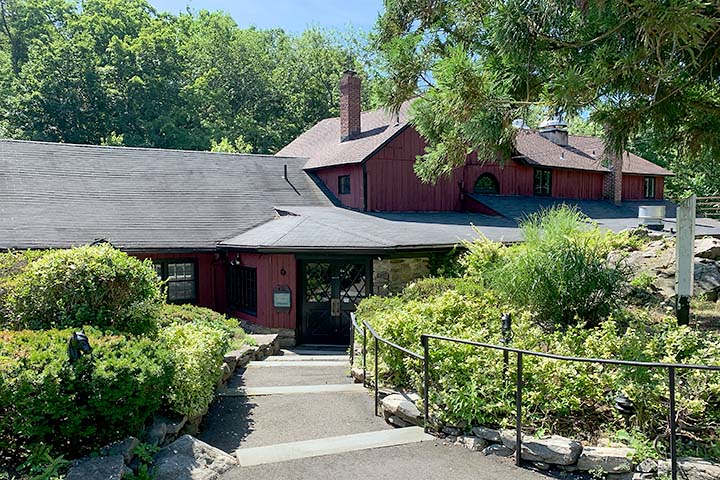 One year ago, we reported that there was "a ray of hope" for Weston's iconic Cobbs Mill Inn, as the developer of GrayBarns had expressed interest in the property. Since then, we have had little of substance to report about progress.

At Speak Up, Mr. Edgar said he too does not have an update, but said he believes the interest is "still on the table." He also said two other groups have "come in to talk informally" with staff about the property.

Dr. Spaulding said the Town is "open to figuring out ways," including tax incentives, "to encourage developers to look at the property." 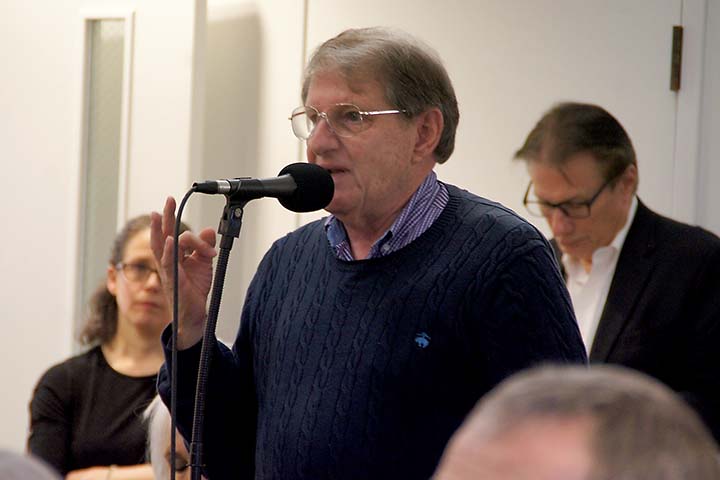 Dr. Spaulding said regionalizing dispatch is a "perennial discussion." He said Westport, Fairfield, and New Canaan are considering it, "we'll see if it gets off the ground," and then discuss joining in. In addition, the Western Connecticut Council of Governments (WestCOG) has recently launched a study of the idea.

Dr. Pesco said the Town and schools "are going to have to look" at sharing technology, finance, and facilities services.

Mr. Edgar said the majority of comments received by P&Z about the Plan of Conservation and Development have to do with a variety of sustainability initiatives in Weston.

Dr. Spaulding described the net virtual metering joint project with the school district, which now provides three megawatts of electricity, some 70 percent of the power consumed at Town facilities. "It's both kinds of green," he said, as the deal will also save taxpayers millions over the next two decades. 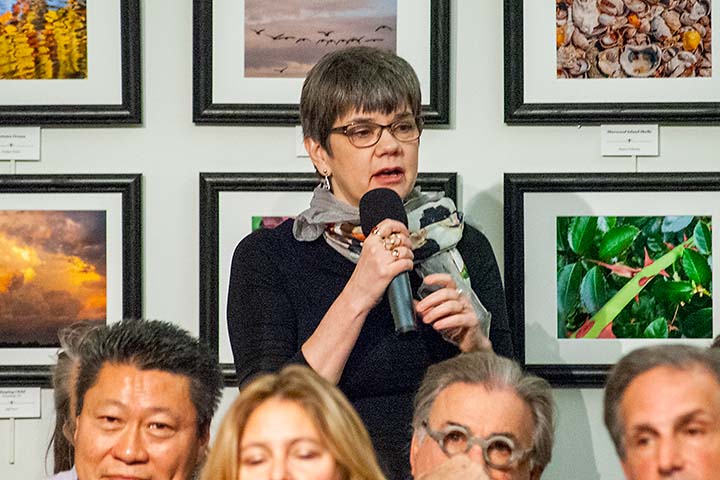 Rep. Hughes said legislators will try to pass a ban on glyphosate, the key ingredient of herbicides like Roundup.

Last year, a similar ban on chlorpyrifos, a neurotoxic pesticide, did not make it to the floor for a vote. In 2015, the EPA deemed chlorpyrifos unsafe at any level. That finding was reversed by the current Washington administration.

California prohibited chlorpyrifos in 2019. Last week, Corteva, the largest manufacturer of chlorpyrifos, announced it will stop production by the end of the year. The company said it was ceasing production due to disappointing sales, not health concerns. 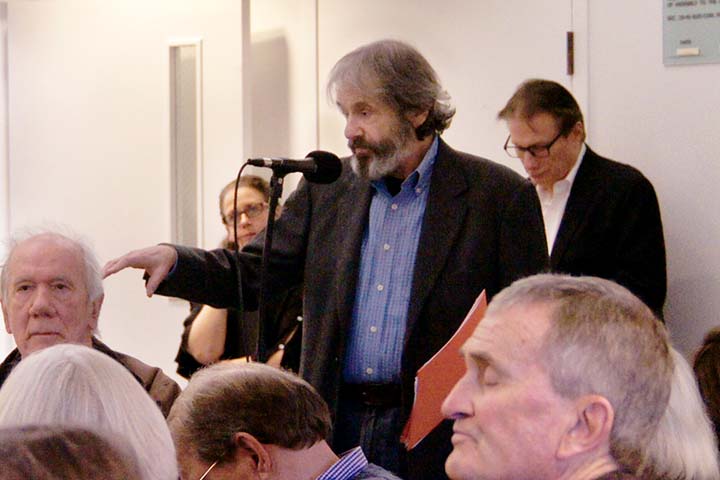 On the same topic, longtime activist Harvey Bellin urged legislators to repeal a Connecticut statute, enacted in 1983, that prevents towns from setting their own regulations about pesticide application. A community like Weston, where most drinking water is drawn from wells, does not have the power to prevent chemicals from flowing into its water supply.

In a related note, the First Selectman recounted discussions with DOT about the application of a glyphosate-based product to kill weeds on State roads. Since individual homeowners can exempt use of the chemical on their properties, Dr. Spaulding asked if the town, as a whole, could be excluded from being sprayed.

Dr. Spaulding said he was told, "yeah, you can do it, but then you have to pay to manually remove all the weeds." 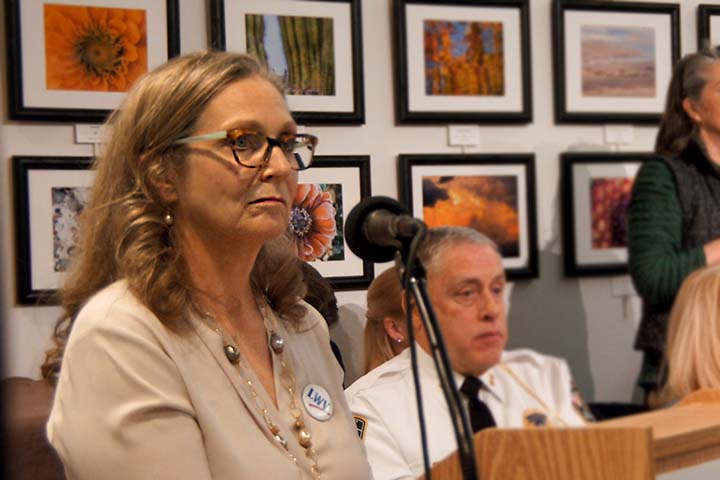 Moderator Laura Smits thanked everyone for an engaging conversation. She reminded all that "these boards and commissions have meetings, and need participation."

"We have to build relationships with each other," she said. "Coming to a room like this or going to those meetings is how progress is made."

A video of the Speak Up event is available online.