A Ray of Hope for Cobb’s Mill Inn 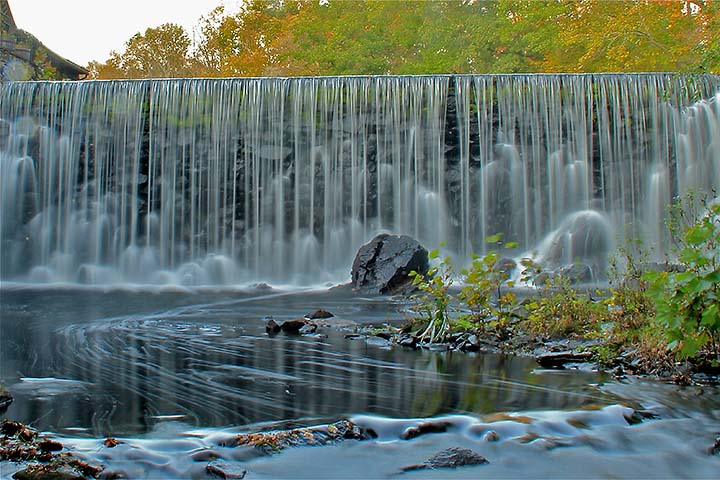 February 8, 2019 — Fans of Weston’s iconic Cobb’s Mill Inn and Norwalk’s GrayBarns will be encouraged that the Glazer Group, which transformed the fabled and faded Silvermine Tavern into “GrayBarns on the Silvermine River,” has taken an interest in Cobb’s Mill.

Andy Glazer, the firm’s principal, appeared at a meeting of the Planning and Zoning Commission on February 4 in a very preliminary pre-application review of his possible interest in the property. P&Z chairman Ken Edgar noted that nothing about the discussion was binding on either the Town or Mr. Glazer.

In fact, Mr. Glazer said he “had to be dragged up here a couple of times” to look at Cobb’s Mill, but acknowledged the landmark property and its condition are in line with his previous work. Like the inn, which has been closed for over two years and has deteriorated, the Silvermine Tavern was a local treasure where glory days seemed to have passed and the future was in doubt.

Silvermine Tavern had two structures, an inn and a restaurant, operating from the 1960s until the economy collapsed and it closed in 2009. It was purchased by the Glazer Group in 2015. The buildings re-opened as GrayBarns in 2017 as “a restored antique with modern features.” The inn has six upscale suites, the tavern seats 100.

A Vision for Cobb's Mill

Asked to describe the current condition of Cobb’s Mill, Mr. Glazer said “it’s a mess.” He said his approach to a project of this nature is to first understand the history of the property and its core, strip out all the mechanicals, and rebuild. If he proceeds with the purchase, he does not envision taking away or adding to the existing structure. His plans would include repairing the waterfall and adjoining riverbanks. He would not develop the part of the property across the river where houses already exist.

Mr. Glazer sees a restored Cobb’s Mill Inn as primarily an event facility with a ballroom, kitchen, and tavern downstairs. He said he would “look at” restoring the general store in place of the previous cafe, but does not believe a day-to-day restaurant would be viable.

If Mr. Glazer proceeds and purchases the property, he told the Commission he would need the inn to be designated as an historic structure. Since 2002, it has been on a list of properties a State commission says should be given that status. Because a small part of the land is below the federal flood plain level, historic designation would help obtain a waiver from FEMA for construction. In addition, local approvals would have to be obtained, beginning with a zoning permit from P&Z.

Mr. Glazer did not comment on whether financial terms for a purchase have been discussed, or if they have, how far they have progressed. He did say the current Cobb’s Mill Inn owners “hope the deal works out.” He speculated that, if the purchase proceeds and all required approvals are obtained, construction would take somewhere between 12 and 18 months.