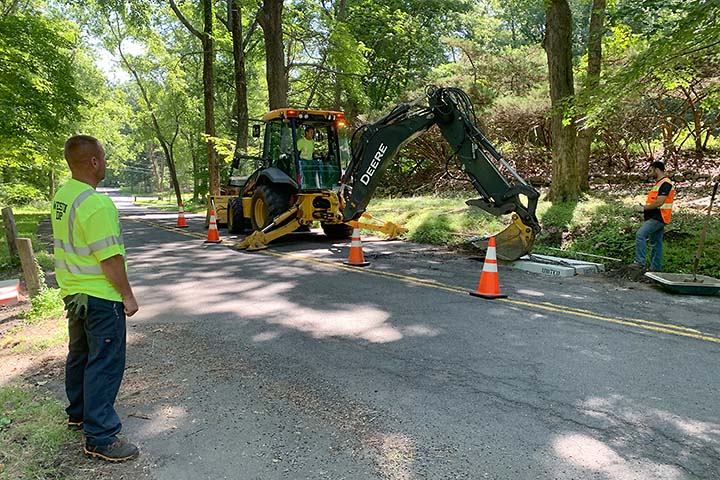 It turns out that the surprising and premature deterioration of some Weston roads is a problem shared by many municipalities, and the Western Council of Governments (WestCOG) wants to know why.

Over the next several weeks, WestCOG will enlist UConn's Connecticut Advanced Pavement Laboratory — the “CAP Lab” — to collect and analyze core samples of road materials that have degraded far earlier than expected.

Several Weston roads fit the bill. Officials at Town Hall hope material from some local roads are included in the testing. Steep Hill Road, most of which will be repaved this month, was last paved only nine years ago. Theoretically, it should have lasted twice as long. But most towns find the old metric of a 20-year repaving cycle no longer holds.

One possible culprit is spikier freeze-thaw cycles that are part of a changing climate in the Northeast. That could be part of it, but WestCOG’s study suggests a growing suspicion that sub-standard materials are being produced and used.

On June 26, WestCOG convened a meeting of representatives from ten municipalities in the region along with the Connecticut Department of Transportation's Office of Engineering and the CAP Lab.

As a result of the meeting, towns were invited to offer samples for testing. WestCOG asked for detailed information about the pavement, including when it was paved, the contractor performing the work, where the materials were produced, and a variety of other records. The testing, which will be limited by the time and resources CAP Lab can provide, will occur in August.

WestCOG staff emphasized the tests would not amount to a fully scientific forensic evaluation, and that a subsequent report would be informal. But it may still help put together the pieces of a vexing puzzle.

Substandard materials are particularly susceptible to the freeze-thaw cycle, partly because they may contain filler content, which impairs the ability of asphalt to bind. Even small cracks expose a road to much larger damage.

In winter, when water below the road surface freezes, ice expands and is thrust upward, pushing against the surface, resulting in rough, cracked pavement. In a spring thaw, melting water moves downward, but can be trapped by frozen soil underneath. Unable to drain, it moves laterally, damaging both the surface and the base layer.

Town Administrator Jonathan Luiz recently told the Board of Selectmen that contractors will be required to submit road material for quality testing. The CAP Lab study may also provide clues for how roads throughout the region can be made more durable.