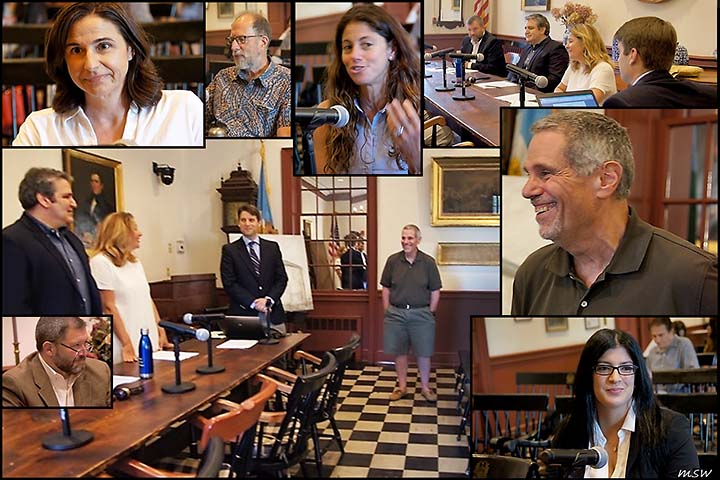 On June 27, the Board of Selectmen appointed new members to boards and committees, re-appointed several others, and accepted resignations with regret.

The Board appointed Amy Gare to replace Melissa Zales Koller on the Board of Finance. Ms. Zales Koller resigned earlier in the month. Ms. Gare, an attorney, is a 13-year Weston resident with extensive legal experience in the financial services industry.

Michele Knapp was appointed to the Building Committee. Ms. Knapp has substantial experience in the construction industry, with special emphasis on energy efficiency and expertise in building materials. She told the Selectmen she particularly wants to focus on energy and environmental needs at Weston schools.

Three longstanding members of the Building Committee were re-appointed: Allen Swerdlowe, its current chairman, Jack Davidoff, and Richard Wolf. All are deeply involved with the school district on current major facilities work being done.

Patricia Goodrich and Debby Katz were re-appointed to the Commission for the Arts.

Not an appointment but a new hire: Sarah Vitone joins Weston’s emergency response team as a dispatcher.

With considerable regret, the Board accepted the resignation of Mike Zegers from the Conservation Commission. He remains a member of the Weston Volunteer Fire Department and is a Registrar of Voters.

The Board also bid a fond farewell to longtime resident Richard Frisch, who, with his wife Marianne, executive director of Weston Historical Society, is moving to North Carolina. Mr. Frisch has played a key role in recording and broadcasting Town meetings for several years.

Finally, the Board accepted the resignation of Dan McNeill from the Board of Education. Mr. McNeill and his family are also moving out of state.