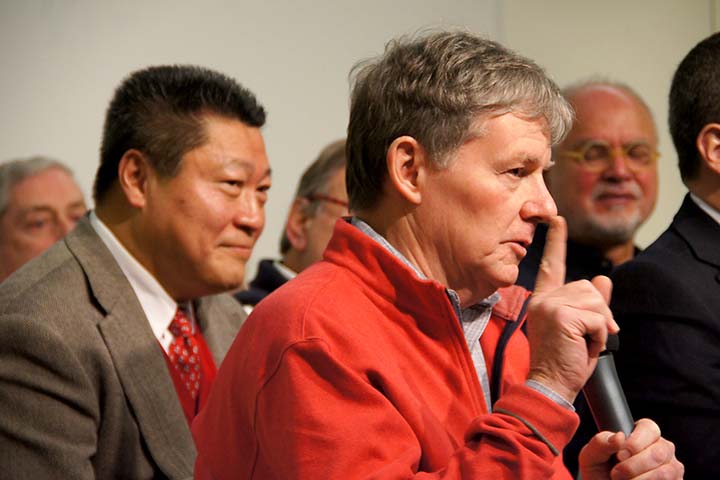 March 12, 2019 — Weston’s Boards of Selectmen, Education, and Finance meet jointly on Tuesday evening, March 12, to discuss proposed State legislation and how it could impact the town.

The three legislators who represent Weston in Hartford — Senators Tony Hwang and Will Haskell, and Representative Anne Hughes — will be part of the discussion. Time is also allotted for public comment. The meeting will be held at 7:30 in the Middle School library.

Is This All About School Regionalization?

The original impetus for the tri-board meeting was concern about “concept bills” introduced in the State Senate to mandate school district consolidation and proposals that threaten Weston tax revenues.

The regionalization bills are superseded by the education component of Governor Ned Lamont’s budget proposal, which contains no mandates. It focuses on incentives for shared services in districts much smaller than Weston’s.

Governor Lamont’s office has also confirmed that a poorly-written section of his bill will be corrected and does not apply here. The paragraph made it appear State funds equal to the school superintendent’s salary would be withheld in districts like Weston and Wilton. They will not.

Other measures remain a concern.

The governor’s bill in the House of Representatives calls for Connecticut towns to assume part of teacher pension fund contributions. Once fully phased in over three years, that would cost the Town close to $1 million each year.

But that’s not the part local officials are most worried about.

Unrelated to the governor’s budget, a bill has been proposed to exempt motor vehicles from taxation by municipalities. The same exemption would apply to a large part of local taxes on personal property used for business purposes.

Those taxes would not go away. They would be replaced by a statewide tax, although possibly at a lower mill rate. The impact on Weston’s finances would be significant.

The Town currently brings in about $3.3 million in motor vehicles taxes and another $900 thousand or so from taxes on personal property. It is unclear how much personal property tax revenue would be lost if the bill passes. Other towns estimate 80 percent. In Weston, 80 percent would be $700 thousand.

In total, if this bill and the governor’s pension fund proposal pass, Weston officials could be forced to come up with $5 million in new revenues, most likely from increased real estate property taxes.

You may be wondering where our legislators stand on these proposals. That’s one reason they have been invited to the meeting.

All three legislators spoke out immediately against the school district regionalization “concept bills.” The three also oppose SB-431, the bill that would take away Weston’s ability to tax motor vehicles and personal business property.

So far, only Senator Hwang has spoken against the governor’s budget section that would force teacher pension fund costs upon towns. He told Weston Today that, for him, “it’s a no-go.”

When we contacted Senator Haskell and Representative Hughes on the pension fund issue, they declined to state a position until they finish reviewing the governor’s budget proposal in its entirety.

SB-431 is another of those concept bills, a placeholder measure that has not yet been fully drafted. As it currently exists, it also proposes a one-mill State tax on real estate properties. A hearing on the bill by the legislature’s Finance committee will take place on March 15, at which time we may learn more about its details.

A variety of published reports say the bill’s sponsor, Senator Martin Looney, intends to aim it at high-value homes, those with market values above $750 thousand. A $50 thousand “homestead exemption” would be subtracted from the taxable value of owner-occupied properties.

Senator Haskell and Representative Hughes will also be part of a community discussion about legislative matters on Monday evening, March 18th at the Weston Public Library. It begins at 7:00.

The program is hosted by ICT4, an activist organization in the 4th Congressional district, of which Weston is part. Also joining the panel will be State Senator Marilyn Moore, who represents Bridgeport, Monroe, and Trumbull, and Westport State Representative Jonathan Steinberg.