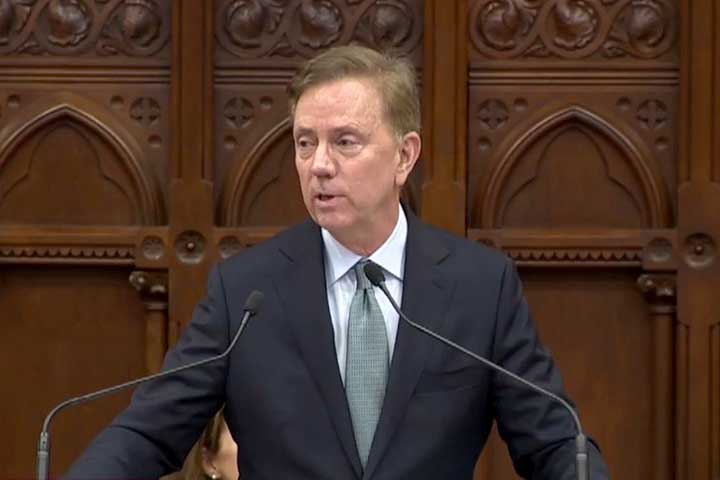 February 22, 2019 — The state budget proposed by Governor Ned Lamont on February 20 would force Weston and most Connecticut municipalities to finance at least 25 percent of pension fund contributions for current teachers. The minimum for struggling cities would be 5 percent.

The proposal complicates the task of Weston officials to minimize an inevitable rise in the mill rate. The legislature may or may not pass the governor’s plan, but because the State’s budget is enacted weeks after voters approve Weston’s, the Board of Finance will probably make decisions anticipating a worst-case scenario.

The governor’s proposal calls for phasing in town obligations over three years. Initial estimates have Weston’s annual contribution starting at $276 thousand, growing to $570 thousand the following year, and reaching $870 thousand in fiscal year 2021-22.

Governor Lamont gave an example in his address to the legislature. Teachers in his hometown of Greenwich are paid, on average, 30 percent above the state median. That means, according to Mr. Lamont, Greenwich would pay 55 percent of contributions to the teacher pension fund.

Weston’s average teacher salary is 24 percent above the median. That puts the town's pension fund contribution at 49 percent, phased in by thirds over three years.

The governor explained his logic. He said it is unfair to make every taxpayer in Connecticut pick up the tab when districts choose to pay teachers above-average wages. That’s the way it works now, because contributions are based on a percentage of salary and are paid by the State.

In a press briefing, Melissa McCaw, the state’s Secretary of the Office of Policy and Management, said decisions about teacher salaries are up to local school districts, but “they must have skin in the game” when those decisions impact State costs.

Weston Board of Finance chairman Steve Ezzes expects some version of the plan to pass, doubts its constitutionality, but has advised his board to be ready to factor it into budget deliberations.

All three Weston legislators praised Governor Lamont’s budget speech and were pleased it was framed as a “conversation starter” with an “open door” receptivity to other ideas.

Senator Tony Hwang told us the part about pension fund cost sharing “is a no-go.”

“We have a duty to fund pensions and keep our word to employees and retirees,” said Mr. Hwang. “But the State should learn how to manage its own resources before imposing burdens on municipalities. Towns like Weston, which manage their finances well, shouldn’t be punished for excesses and negligence at the state level. And we shouldn’t do anything that hurts education.”

Representative Anne Hughes told us “we must remind ourselves this is the initial draft” of “an equal opportunity budget with something for everyone to object to.” Ms. Hughes plans to schedule a series of community forums and echoed the governor’s call to “get to work.”

Senator Will Haskell told us he is “still crunching the numbers and looking into how this would impact Weston.” In a statement, Mr. Haskell said revitalizing Connecticut “is going to require some outside-of-the-box thinking” and that “the road ahead is a long one, and I look forward to talking with my constituents about every item on the budget. It won’t be an easy conversation.”

All three legislators have been invited to a mid-March special joint meeting of the boards of Selectmen, Finance, and Education.