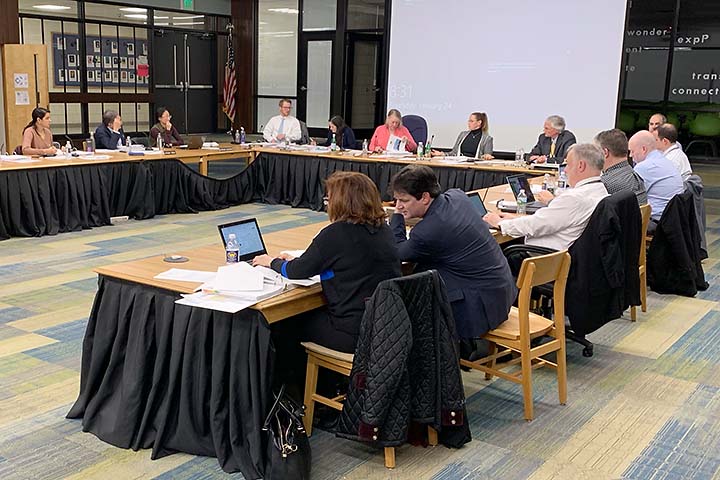 January 25, 2019 — In a nearly three-hour meeting on Thursday evening, the Board of Education voted 5–2 to make modest reductions to its 2019-20 fiscal year operating budget request.

The revised request is for $53,466,710, a 3.93 percent increase, roughly $2 million above the current budget. In addition, the Board will request nearly $1.4 million in capital improvements.

At the meeting, much discussion centered around whether two teaching positions at Hurlbutt Elementary School could be eliminated without increasing class sizes and diminishing personalized instruction. In the end, the Board voted to remove only one.

The Board clearly has no desire to increase class sizes. Most members seemed comfortable that a first-grade teaching position could be cut while preserving quality education and staying within current size guidelines. Members struggled with whether a second cut could be made, this one at the kindergarten level. The views of a majority shifted until the moment of the vote, following a plea by Board chair Gina Albert to delay a decision until later in the budget cycle when more may be known about enrollments.

At issue is the level of kindergarten enrollments in the coming school year. School district officials say the number is notoriously difficult to predict with precision until late summer, well after budgets are locked and staffing levels set.

If enrollments come in significantly higher than expected, class sizes could swell unless the district can fund a new hire. Louis Brey, the district’s Human Resources director and internal legal counsel, told the Board that last-minute hires are difficult to make, as many experienced, well-qualified candidates have already taken other jobs.

When actual enrollments fall well short of expectations, as sometimes happens, taxpayers can essentially end up paying for unneeded teaching positions. Board member Sara Spaulding said this amounts to a “pre-tax,” a practice, she reminded her colleagues, strongly discouraged by the Board of Finance.

Ms. Spaulding voted against the revised budget request, apparently out of concern that reductions were insufficient. Tony Pesco also voted no. Those in favor were Ms. Albert, Ellen Uzenoff, Jacqueline Blechinger, Ruby Hedge, and Dan McNeill. Earlier, Mr. McNeill had urged colleagues to focus on the educational aspects and not look at the budget “through a budgetary lens.” He suggested leaving it to the Board of Finance to push back on the total, noting if that happens, the Education board will be forced to make more cuts.

In effect, that is exactly what the Board opted to do.

A Cautious Approach to Potential Reductions

Earlier in the week, Superintendent Dr. William McKersie submitted a list of potential reductions to the budget request. One was harmless: the deletion of an accidental double entry. Another was a welcome reduction of higher cleaning costs, as bids came in lower than expected. The others were more substantive, and the Superintendent made clear his hope they would never be adopted.

Except for removing a first grade teaching position, which erases almost $89,000 from the request, the Board’s vote barely touched Dr. McKersie’s list. The Board did vote to reduce additional legal fees related to special education by $15,000 and nearly $25,000 in miscellaneous expenses. Although it was not on the list, they also eliminated $10,600 for membership in the Connecticut Association of Boards of Education (CABE), an organization that provides valuable legislative information to member boards and lobbies on their behalf.

Other than that, programs on the list are safe. For the moment. The Board still intends to consider increasing parking fees and also wants to look at participation fees for athletics and Company, the High School theater group.

For the moment, the kindergarten teaching position remains in the proposed budget. Lightly-enrolled High School after-hours clubs are still supported. Funds are still proposed for cheerleading and field hockey assistant coaches. The gifted-students Project Challenge is safe. So is K–2 World Language study. Positions will not be cut that could increase class sizes in grades 2–5 and at the Middle School. Hurlbutt’s science para educator position remains, as does the grade 3–5 math enrichment program. Plans to extend Odyssey of the Mind and the Science Olympiad to the Middle School are still in place and Colonial Day is still funded.

Dr. McKersie said that if the total revised budget request is not approved, all of these things — plus other ideas the Board may develop — would have to come back to the table. He described the list as a last resort if options are exhausted to reduce spending "without touching the classroom." He said district staff had been preparing the list of potential cuts ever since the State threatened two years ago to force towns to absorb millions in pension costs, which would have put extreme pressure on Weston’s finances.

After the meeting, Dr. McKersie said he is “pleased with the Board of Education’s due diligence and careful attention to the entire budget. They are deeply committed to Weston’s students and the school district staff. I believe we have a strong budget to bring to the town, and I respect the proposal the Board settled on.”

The Board adjusted the proposed capital budget, increasing it by about $200,000 to roughly $1.4 million. This came from a decision to accelerate replacing the boiler and piping at Hurlbutt’s South House, which also serves the Senior Center. The boiler is in a state of extreme disrepair and requires constant maintenance. To offset much of the $350,000 cost, the Board cut a Middle School locker replacement project by $135,000 and delayed a $20,000 street light upgrade.

The budget’s next stop is the Board of Selectmen, which is largely a courtesy. After that, it goes to the Board of Finance, which cannot rule on specific line items, but does set the final total. In April, the public gets the ultimate say, at the Annual Town Budget Meeting.

Correction: In an earlier edition, we indicated that Board Member Dan McNeill voted against the budget. That is not the case, and we regret the error.