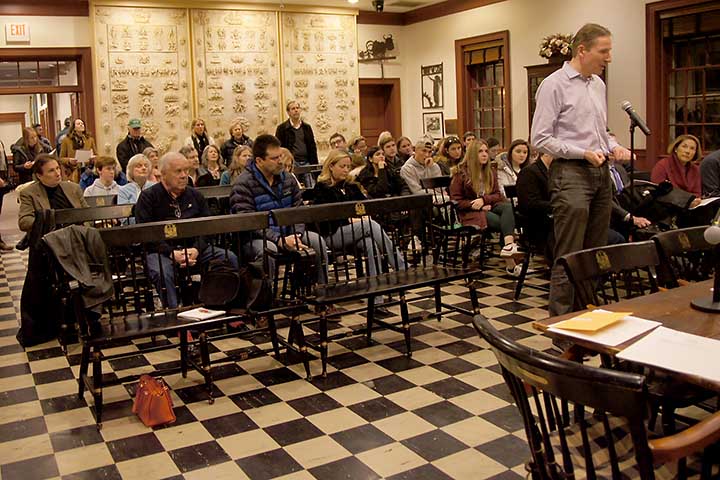 January 18, 2019 — It was standing-room only at the Town Hall Meeting room Thursday evening for a hearing on an ordinance to ban fracking and drilling waste from town.

Almost every speaker supported the measure, which was presented by the Sustainability Committee. After a brief discussion — the matter has come before the Selectmen several times before — the Board voted 2-1 in favor.

The dissenting vote came from Selectman Stephan Grozinger, who characterized it as only a “political statement,” since Connecticut already has a moratorium on some fracking wastes and Weston has no solid or liquid waste processing facilities. “Ordinances must be conceived carefully and tightly drafted,” said Mr. Grozinger. “This one isn’t.”

First Selectman Chris Spaulding spoke in favor, noting that fracking occurs nearby in Pennsylvania and dangerous wastes can be sold and transported for use as a road de-icer. “We must consider the future,” said Dr. Spaulding. “The young people in the room are saying ‘look out for us.’ I’m comfortable moving ahead.”

Selectman Samantha Nestor agreed. “We need to have a longer view,” she said. “This ordinance looks forward. This is one of the pillars of Weston. We are an environmentally conscious town.”