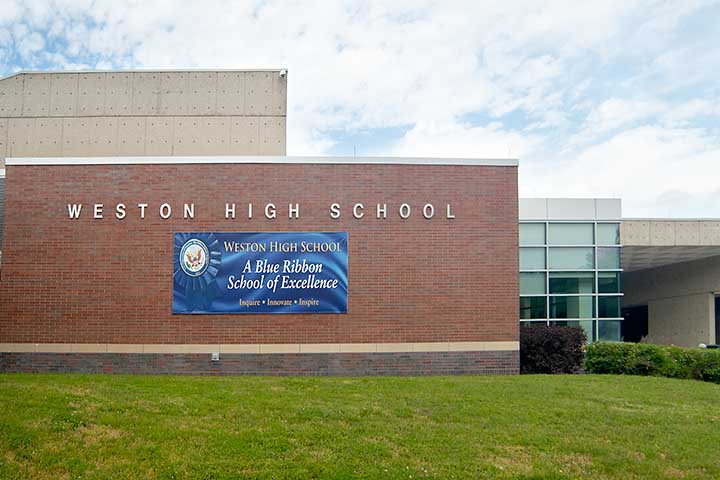 January 11, 2019 — Next week, the Weston School District will present its proposed budget for the coming fiscal year. It calls for a significant increase in school spending.

The presentation will occur on Thursday evening, January 17, at the Weston Middle School library. The meeting begins at 7:00 pm.

In addition, the District will request $1.2 million for capital improvements next year, and expects to make similar requests for just under $1 million in each of the two following budget cycles.

In an executive summary, the school administration acknowledged the increase is the “largest on record in many years,” more than twice the average of the last three years, and attributed it to higher contractual salary and benefit costs. School enrollment is projected to decline slightly next year, by 19 students.

Increases virtually across the board

Increases occur in every major budget category, except for a small decline in the cost of operating Weston Middle School and a larger drop in technology costs. The largest increases, by dollar amount, are in district-wide services and special education.

District-wide services include employee health and retirement benefits, insurance, and Social Security and Medicare matching. They increase in the proposed budget by $571 thousand.

The district recently moved to a State plan for health insurance, which saved nearly $3 million. But the cost of the plan is increasing, and more district employees are moving into the plan instead of being covered by a spouse’s insurance.

Special education costs rise by $708 thousand in the proposed budget. SPED, as it is called, has long been the most unpredictable major school expense. The district must absorb the costs of unilateral outplacement of students with various special needs into out-of-district programs. At budget time, it becomes a guessing game of how many students will require such services, and at what cost.

Last fiscal year, outplacements overshot the budget by $1.6 million, which required the Town to make a supplemental appropriation out of reserves. In the current year budget, funds were allocated to add staff and implement programs to better anticipate such needs and prepare to meet them in advance within the school system.

It will take some time for the results of this new approach to fully present themselves. At the moment, the schools project a deficit for the year ending June 30 of $222 thousand, largely a result of outplacements. That is a significant improvement over last year, and Superintendent Dr. William McKersie told the Board of Finance on January 10 that the schools are working to find ways to offset as much as possible of the projected shortfall.

Speaking of the Board of Finance...

...the school district seems to be preparing for a challenge.

The executive summary says “We hear frequently, ‘you must be able to find funding in your multi-million dollar budget …’" That appears to allude to recent comments at the Board of Finance when two relatively small ($40 thousand or less) supplemental expenditure requests were made. One was rejected because it did not conform to budgetary procedures. The other was approved, but remains a sore spot for at least one Finance member.

The budget document also details a large number of steps the schools have taken in recent years to reduce costs, and positions the increase as less than it might have been, had it not excluded nearly $800 thousand that could have also been requested.

The administration contends that “without the requested funding, the school system Weston considers a ‘jewel in its crown’ will begin to diminish,” a reference to the belief that many people move to Weston because of the schools.

That belief is confirmed by the recently-conducted town survey. Over 75 percent of respondents said the school system is one of the three top reasons they chose to move here.

But more than half of all respondents also said their finances are a source of constant concern. 74 percent said taxes make it difficult to afford living here, and 55% of those who plan to move away in the next few years say taxes are a major reason why.

Can it be reduced?

It is hard to predict if the Board of Finance will demand reductions, or for that matter if the Board of Education will when the budget is formally presented to them on January 22.

The questions of “can it be cut?” and “where?” are bound to be asked, and the school district administration clearly knows it, because the budget proposal addresses them directly.

The administration says despite the budget’s size, there is limited flexibility, and that most of it is non-negotiable. 87 percent of it is consumed by salaries, benefits, pupil personnel services and special education. The remaining categories, according to the proposal, are “essential and budgeted tightly.” These include transportation, facility and security contracts, utilities, technology, risk management, and other expenses.

As to where cuts could be made, the administration takes the unusual step of detailing how it would likely recommend the Board of Education make reductions:

You can download the budget proposal executive summary here (11 pages, 2 megabytes). The proposal in its entirety can be downloaded here (273 pages, 38 megabytes).