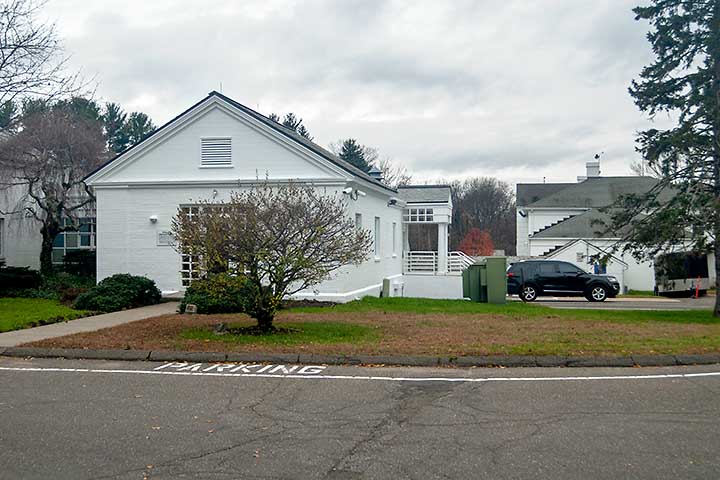 November 28, 2018 — As we reported recently, plans are being developed to improve Weston’s critical public safety facilities and equipment. This is an update of where things stand.

For the most part, the overall concept remains intact, but revisions to one component have reduced estimates for the Town’s total spend. The Building Committee is actively reviewing preliminary architectural designs and making recommendations. The Board of Finance has examined the project in more depth and expressed in-principle support. Several other boards, commissions, and committees will soon be involved.

As a whole, the project addresses problems that have lingered for years.

Weston’s police facility needs more room, and current conditions present potential liabilities. Initial estimates peg the costs of remediation and expansion at about $600 thousand. Another $250 thousand would be needed to reconfigure Town Hall so some existing space could be used by the police.

Firehouse No. 1 needs repair and is the target site for long-sought EMS quarters. An expansion would cost the town about $550 thousand. EMS would contribute another $750 thousand.

The town’s emergency response communication systems are obsolete and disjointed. Acquiring up-to-date, compatible systems could cost as much as $1.8 million, plus another $400 thousand if the school district’s equipment is upgraded.

That leaves the dispatch center, the heart of emergency response, which is so dilapidated that, according to the First Selectman, public safety is at risk, particularly if severe weather reoccurs. The facility did not fare well in 2018’s winter storms, and could have easily failed.

The first draft plan called for a $630 thousand spend to rebuild the dispatch center, including adding a second floor to provide more room for the police. That plan appears to be destined for a significant scale-down, which could reduce overall project costs by over $500 thousand.

On a recent tour of the dispatch center by Town officials, one was overheard muttering “What a dump.”

It’s a tiny space — some Weston living rooms are larger — where dispatchers perform vital duties in an environment that often becomes demanding and intense. Working conditions, while perhaps not sinking to the level of a dump, are far less than ideal.

When the facility was built in the 1970s, it was little more than a room for telephone switchboards. Today’s systems are far more complex and delicate. They involve considerably more wiring and circuitry, much of which is exposed. Ideally, there would be a raised floor, but the ceiling isn’t high enough to accommodate one. Many of the furnishings are improvised, hand-built from scrap. 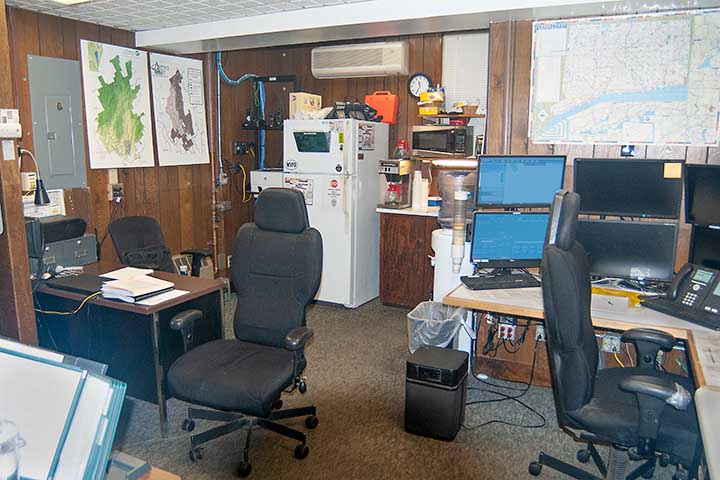 Inside the dispatch center. 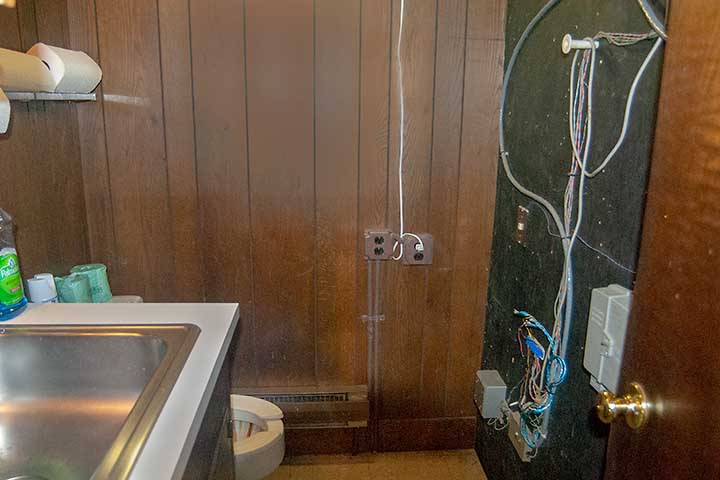 Every possible space is used for equipment.

The most pressing problem at dispatch is the roof. It is old, and it leaks. Early this year, rain poured in above vital electronics. Only blue tarps and duct tape kept residents from being cut off from emergency assistance. 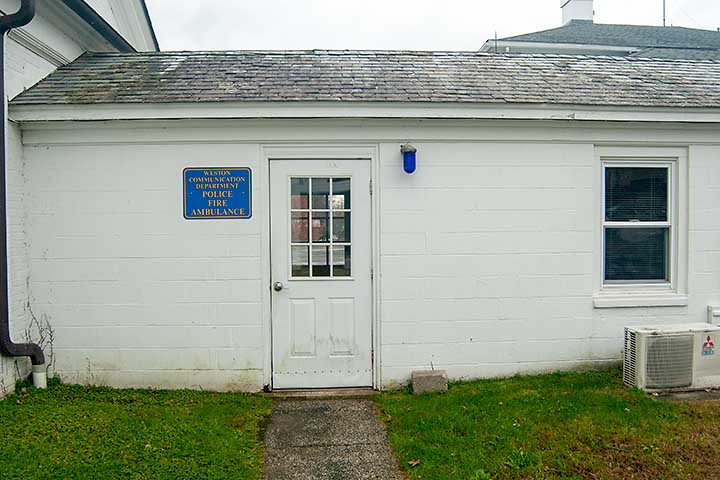 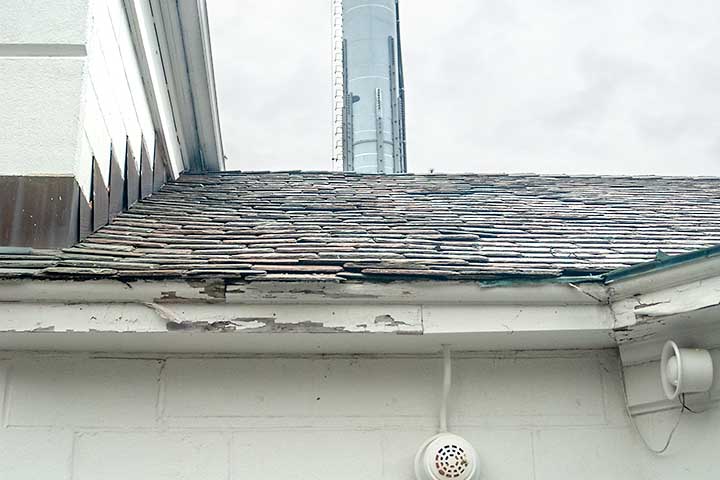 A roof in need of repair.

The problem with the original plan for rebuilding the structure is the possibility it would only be an expensive short-term fix. Sometime in the next few years a second phase of the project, to further improve safety facilities, could require it being torn down. In addition, there is talk of creating a regional dispatch center.

The first draft was reviewed in a Building Committee meeting on November 2 with First Selectman Spaulding, Town Administrator Jonathan Luiz, architect Brian Humes, and the heads of the Police Department, Volunteer Fire Department, and EMS.

The Building Committee advises the Town regarding Town-owned property, including design, planning, construction, contracting, and the close-up of and payments for projects. It issues requests for proposals, recommends selection of architects, engineers, and contractors, and negotiates contracts that are presented to the boards of Selectmen and Finance for final approval. The Committee oversees all Town related construction and performs these same tasks for Board of Education capital projects.

At the meeting, committee chairman Allen Swerdlowe presented an idea: don’t rebuild, temporarily house dispatch in a portable trailer while the Town sorts out Phase 2 and potential regionalization. Mr. Humes accepted the task of doing an analysis and comparing costs.

The optics of housing a vital facility in a trailer on the Town campus are a question. Also, temporary facilities in Weston often become temporary in name only. There is no certainty that Phase 2 will happen anytime soon. The long-discussed regionalization of dispatch might never materialize and could require a change in State labor laws.

Still, the idea has appeal. A good indication of conditions in the current facility could be what dispatch manager John Ojarovsky told us, that a trailer would be “a step up” from what exists today.

Back to Square One

Mr. Humes returned to the Building Committee on November 26 with an analysis indicating the cost of a trailer would be nearly $800 thousand, far more than the cost of tearing down the existing structure and building a new, larger one.

The rental fee for a 12’ by 40’ trailer is fairly cheap, probably only $800 per month. But before it could be put into service, it would have to be completely rebuilt at considerable expense to make it bullet resistant, hurricane-proof, and publicly accessible. It also would require purchasing two new dispatch consoles and a backup generator.

Mr. Humes presented two alternatives. One is a slightly downsized version of the original plan, which would come in at over $500 thousand. The other was referred to as minimal “cosmetic” renovations of the existing facility, which would cost $82,000.

The roof was patched this summer, and isn’t leaking at the moment. But “it will leak again,” said Mr. Swerdlowe. In the minimal plan, the facility would be painted and receive various repairs, including to some electronic equipment. A portion of the costs involve moving dispatch systems in and out during construction. And the roof would be completely replaced.

Mr. Swerdlowe and the rest of the Building Committee liked the minimal renovations idea, and it appeared Dr. Spaulding and Mr. Luiz do as well.

The project as a whole remains in the early stages of development and work continues apace. The most likely next step is a review by the Planning and Zoning Commission. Once specifications are more sharply in focus, requests for proposals will be issued and a supplemental appropriation may be needed for preparation of design and engineering documents.

Funding for the project will be part of ongoing discussions by the boards of Selectmen and Finance.

Dr. Spaulding estimates that the planning and approval processes will take about four months to complete, and hopes that if the project proceeds, construction can begin in early spring.