Letter to the Editor

Precedent. An earlier event or action that is regarded as an example or guide to be considered in subsequent similar circumstances.

In the architecture world, precedent is considered often and is used to build a case for certain design decisions.

In Weston CT, the Historic District Commission is considering an addition to our town library that was built in 1963. The structure is low slung, stone and glass, with a series of parallel gable roofs. The proposed addition is a glassy structure nestled into the back of the existing library. The addition will house a much needed maker-space for the town and is enthusiastically supported by many. As I understand it, the HDC is concerned about how the new design fits into the composition of the existing building and the historic district as a whole.

The good news for the townspeople is that there is a nearby example in the historic district that sets a noteworthy precedent.

The town hall was built in 1952. The design was a streamlined mid-century take on classic Colonial architecture. In 1988, an addition was built that represented post-modern design. While the original town hall structure and the addition are notably different, they work together beautifully. The difference is charming. Each part of the building represents a certain period in time yet they work together cohesively. Details, materiality, and scale all play a part.

The historic district itself includes buildings and structures from the 18th century through to the end of the 20th century. That, in fact, is what makes this an unusual and especially charming historic district. Each building is an expression of its own time.

That is the context for the new library addition and should be the basis for HDC determining its appropriateness. The addition, rightly so, expresses its time. Its materials take their cues from the existing building. It is tucked thoughtfully behind the 1960’s structure and, at the same time, has its own expression. Preserving an historic district of this sort requires making sure each new element is well considered, plays well with others, and is an expression of its own time. I recommend the HDC support the project and grant a Certificate of Appropriateness. 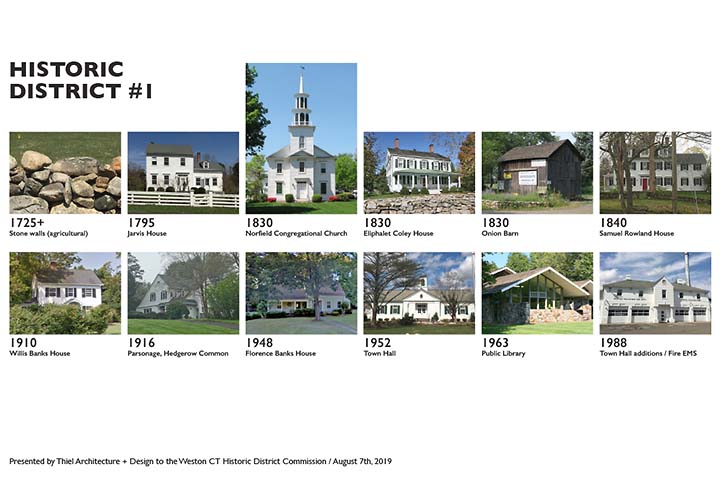 Editor's Note: With her letter, Ms. Thiel included these images of various architectural styles currently in Historic District No. 1.

We will not edit letters. Submission does not ensure publication. Letters containing potentially libelous content will not be considered for publication.

The views, opinions, and statements expressed in letters are those of their authors. They should not be construed as statements by, views of, or opinions held by Weston Today, its editor, publisher, or staff.