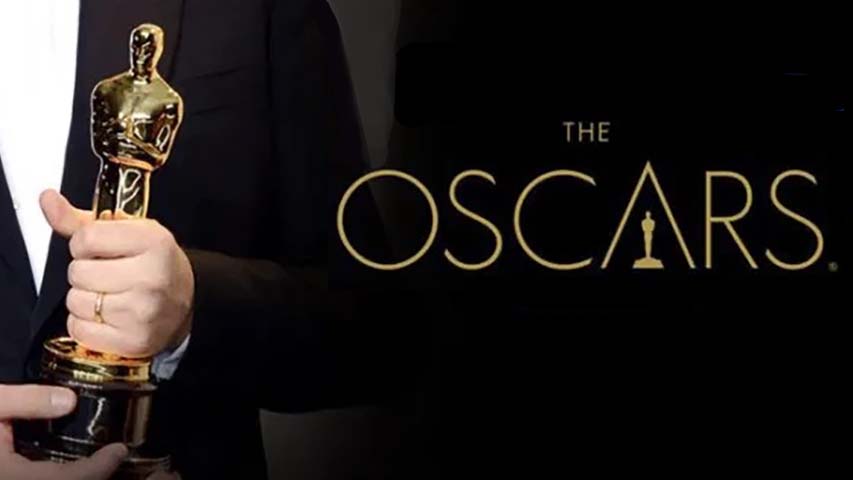 Without doubt, movies are the most collaborative artistic medium, and streaming has made this year’s contenders more available than ever before. Some of the most memorable artisan aspects of filmmaking are Cinematography, Editing, Production Design, Costume Design and Sound, all contributing to the ultimate success of a film. 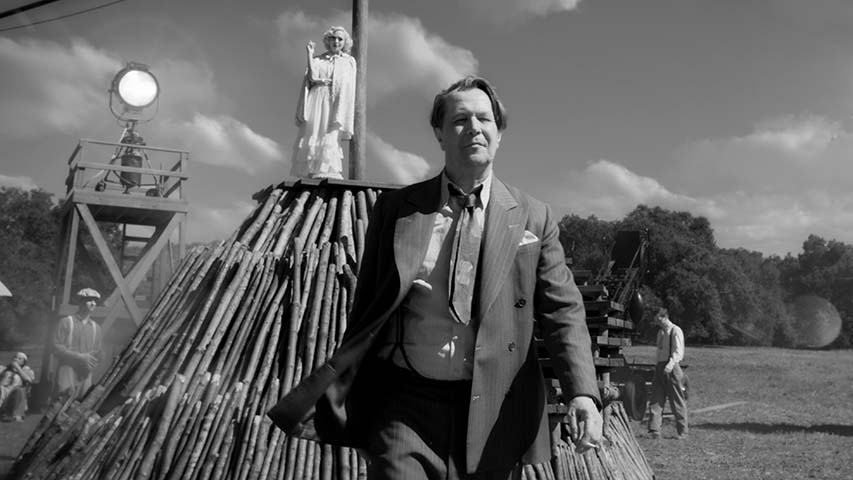 Directors of Photography honored by the Cinematography branch are Sean Bobbitt (“Judas and the Black Messiah”), Erik Messerschmidt (“Mank”), Dariusz Wolski (“News of the World”) Joshua James Richards (“Nomadland”) and Phedon Papamichael (“The Trial of the Chicago 7”).

Sean Bobbitt is a firm believer in “less is more.” Consider the scene where LaKeith Stanfield’s petty crook Bill O’Neal tries to escape a local gang and a low-angle shot clearly shows a knife coming from the top of the car, instilling fear in the character and viewer, all from the perspective of the gas pedal.

“‘Citizen Kane’ provided context for our film,” admits Erik Messerschmidt, “but what we did was very different. It was more of a springboard, and we certainly borrowed things. (Director) David Fincher was very specific about what he wanted to reference. Deep focus was important, along with low camera angles. A lot of that comes from ‘Citizen Kane,’ but it also comes from vintage black-and-white.”

Dariusz Wolski recalls, “We all grew on Westerns, and we just wanted to make ‘News’ contemporary. We incorporated handheld that doesn’t look as if it’s handheld. I believe in simplicity. We didn’t use cranes. We didn’t use fancy equipment. It is kind of nice to restrain yourself.”

“By the time ‘Nomadland’ rolled around, Chloe (director Zhao) and I had worked on two other movies in America’s heartland, so we were really excited to make a road movie in places we’d fallen in love with,” says Joshua James Richards, who used soft lighting, natural settings, wide-open spaces, and a sky-dominated aesthetic to reveal the spirit of an American migration. “I wanted to be in their world, not shooting from a distance.”

According to Phedon Papamichael, filming the Chicago riots on a limited budget was a challenge: “To cover the fact that we didn’t have thousands of extras, we used extreme close-ups — blood trickling, a tear-gas canister being loaded, a pair of eyes — plus archival footage.” 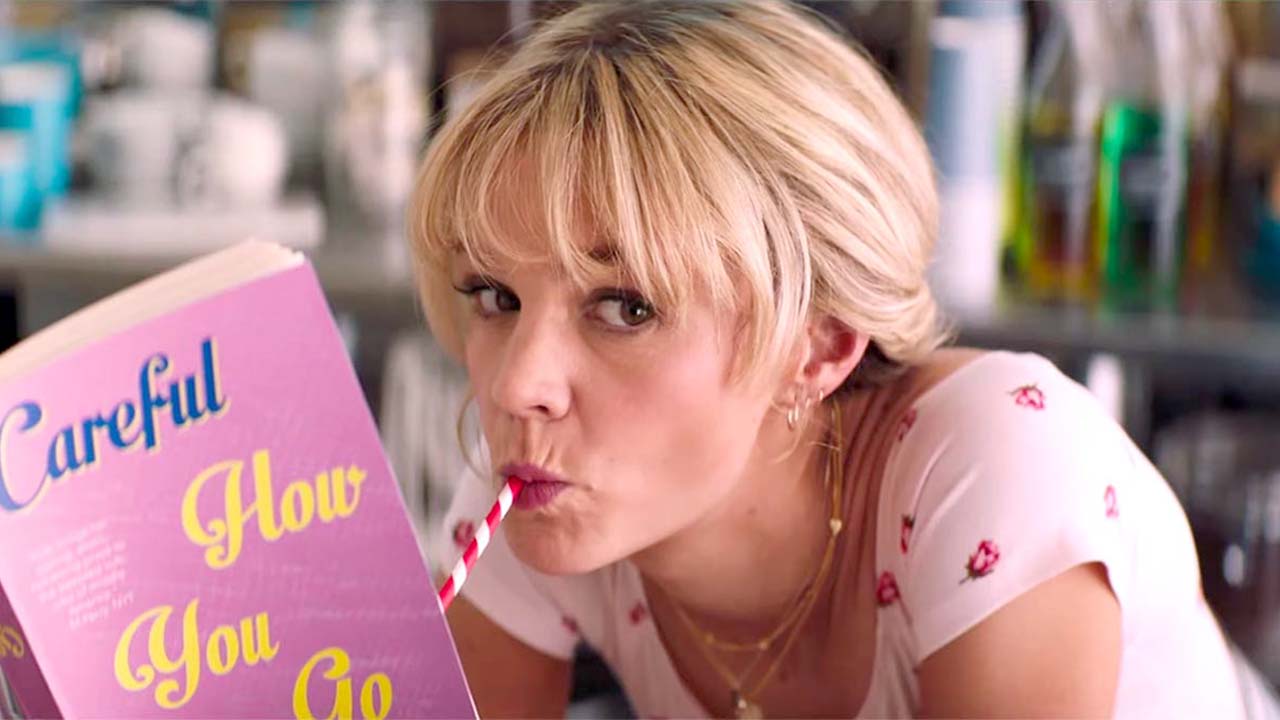 As opposed to Cinematography, Film Editing is one of the least understood aspects of filmmaking. “The Cutting Edge” is a documentary that explains the process, which can slow down or speed up the pace, along with explaining the psychology of a character. Along with the director, the editor decides what we look at and for how long.

For Editing, these are the contenders: “The Father,” “Nomadland,” “Promising Young Woman,” “Sound of Metal,” and “The Trial of the Chicago 7.” “Mank” is notably absent.

While Chloe Zhao may be the “Nomadland” favorite, only two directors have ever won in this category: James Cameron for “Titanic” and Afonso Curaron for “Gravity.” Both also won Oscars for directing these films.

Working on “Promising Young Woman,” Frederic Thorval took on the challenge of balancing moments that vary wildly: pure horror, tense thriller and rom-com: “The main thing was to follow Carey Mulligan’s character; she helps us to accept the changes of tone.”

It was Mikkel E.G. Nielsen’s editing that solidified the sonic experience of the punk rock drummer who loses his hearing in “Sound of Metal.”

Alan Baumgarten reveals, “In ‘The Trial of the Chicago 7,’ the challenge was to cross-cut between the tense courtroom drama and flashbacks to the riot … juggling newly shot footage, stock material and even clips from Haskell Wexler’s 1969 drama ‘Medium Cool,’ which was shot on the fly amid the turbulent events surrounding the convention.” 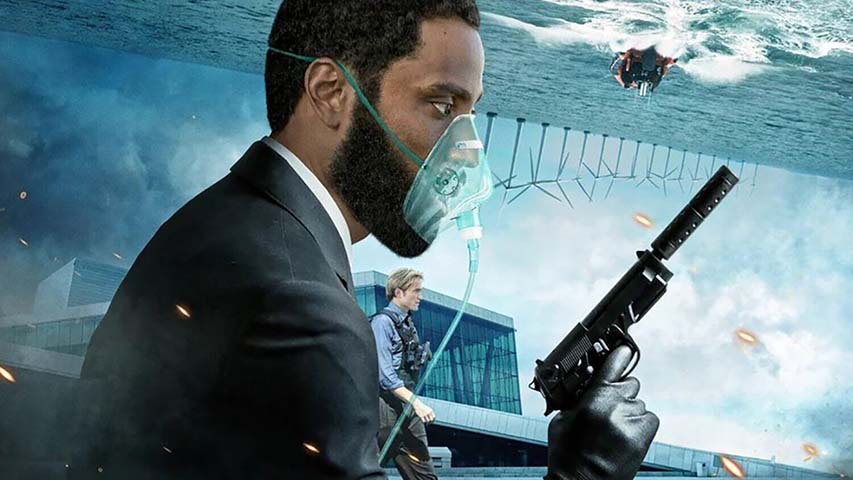 For Production Design, the Academy is deciding among “The Father,” “Ma Rainey’s Black Bottom,” “Mank,” “News of the World” and “Tenet.”

While “The Father” ostensibly takes place in the apartment of a man in the throes of dementia, Peter Francis’s production design team cleverly puts the viewer in the same disconcerting frame of mind, enhancing the flow of the story.

In “Ma Rainey’s Black Bottom,” it’s a hot Chicago day in a recording studio, where Rainey tangles with her Black sidemen and the white businessmen attempting to rein her in.

For “Mank,” production designer Donald Graham Burt harvested research on Hearst’s San Simeon Castle: “It was more about giving a tone and grandeur for the space, using the architectural shape of the space and then enhancing it our own way…We shot those scenes on a stage in Los Angeles.”

Part of David Crank’s mission in “News of the World” was showing that the film isn’t really about a newsreader in 1870 caring for an orphaned child amid the rugged Western landscape — it’s about the importance of storytelling and the importance of truthful, honest news that isn’t propaganda.

“The director’s (Paul Greengrass) background is in documentaries. He wanted each location to feel like we were discovering a new place. Each town had a purpose, leading to a progression of how things happen in the story,” Crank says. “I spent the first 10 years of my career in theater, so it was like summer stock for me. That jerry-rigged quality really did exist in these actual towns.”

Nathan Crowley purchased an old Boeing 747 for “Tenet,” so that (director) Christopher Nolan could have an action set, along with scouting locations in Estonia, Norway, Italy and India. 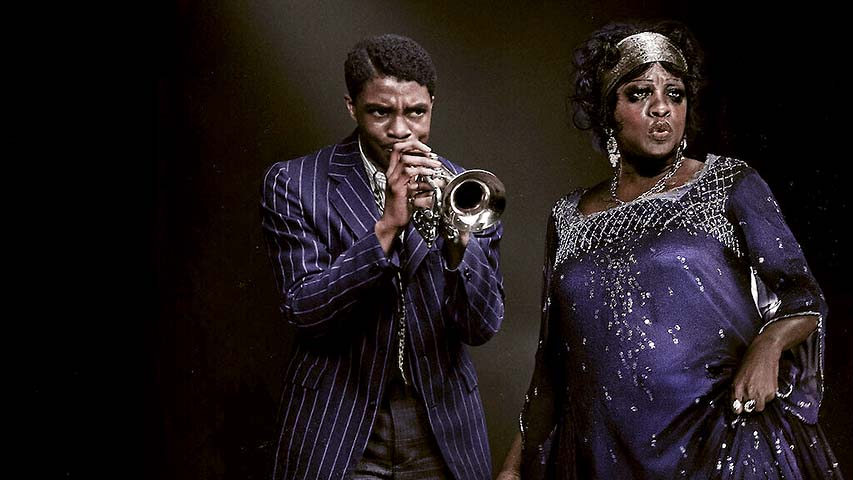 Utilizing her background in Elizabethan/Regency eras in England for “Emma,” Alexandra Byrne created character-specific creations, using color and tailoring to reference each person’s socio-economic status. One item, Emma’s long yellow jacket, immediately inspired knockoffs on Etsy. For men, a starched-linen cravat & collar were the epitome of status since laundering of clothes was infrequent during that period.

89 year-old Ann Roth has worked on more than 100 movies, including “Ma Rainey,” becoming one of the oldest nominees in Oscar history; screenwriter James Ivory and director Agnes Varda were also 89 when they were nominated in 2018. In Roth’s costumes, you know these characters before they speak.

To dress Amanda Seyfried as Marion Davies in “Mank,” Trish Summerville studied pattern books from the 1930s to make sure she maintained authenticity: “I pulled some old pieces from rental houses that had interesting sleeves — full on the top, with a little twist to it and ballooning on the forearm with a fitted cuff.”

To dress Gary Oldman as screenwriter Herman Mankiewicz, Summerville chose a wardrobe inspired by films from the 1930s and ‘40s but then weathered the fabrics and made them more rumpled and ill-fitting to suit the character. It’s all about telling the story with authenticity.

Bina Daigeler had to adapt design and corresponding textiles to accommodate the stunts in “Mulan.” She used Stella McCartney sneakers, wrapped in leather, for Yifei Liu’s boots. “They allowed easy movement and no one knew — except the crew, who subsequently bought the same ones.”

Rather than relying on visual effects, Mark Coulier transformed a live actor into a puppet who becomes a boy in the children’s classic “Pinocchio,” explaining, “We wanted to keep it grounded in performance rather than complex technical effects. We used silicone pieces for the face: a tubular neckpiece that pulled on, plus a back-of-the-head piece, a forehead, a nose, a chin, a top lip and cheeks, earpieces.” 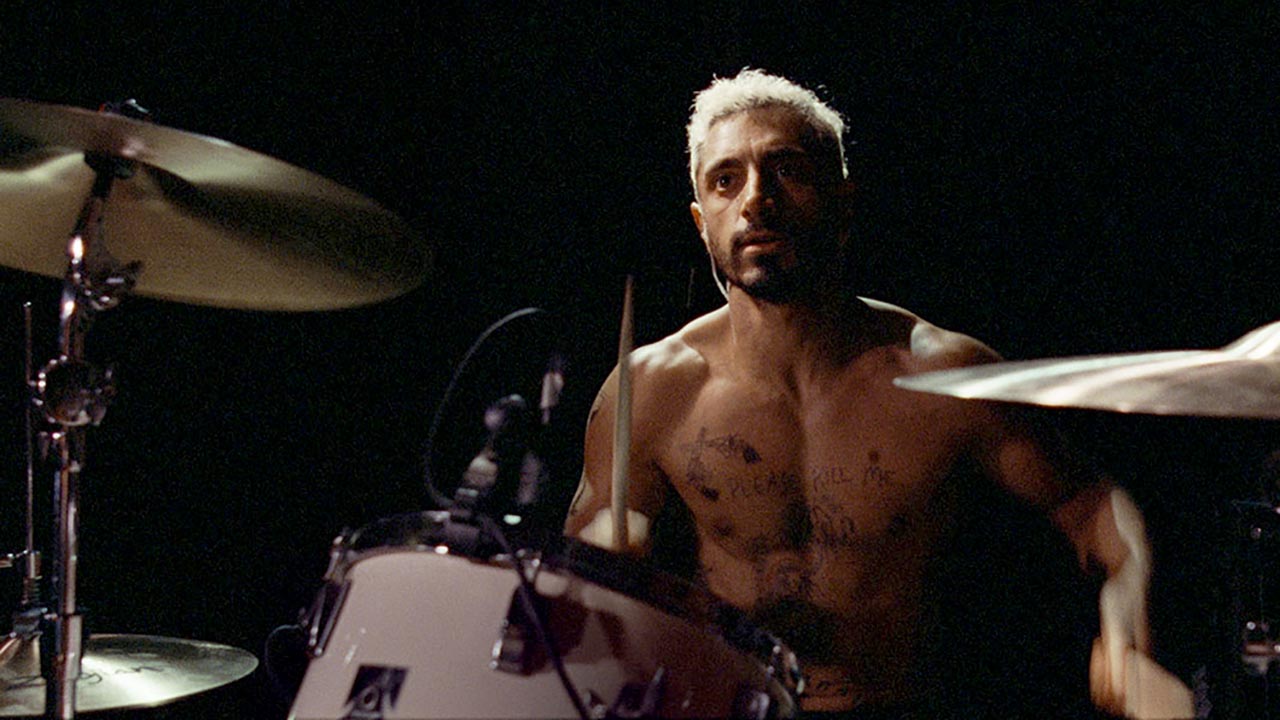 Previously there were two Sound categories; now Sound Editing and Sound Mixing have been combined into one.

Not surprisingly, although “Tenet” scored nominations in Production Design and Visual Effects, it received none in this category. Apparently the Sound engineers couldn’t make out the dialogue either.

In “Greyhound,” technicians captured the reverberating noise aboard a vessel tracking the formation of German U-boats trying to destroy the USS Keeling, code-named Greyhound, in a battle in the Atlantic. The sound immerses viewers in nail-biting tension, similar to the D-Day landing in “Saving Private Ryan” and the combat sequences in “Dunkirk.”

Sound pro Ren Klyce worked on both “Mank” and “Soul.” For “Mank,” he created the soundtrack three times: “First, we made it pristine, like a modern-day film. Then we ran it through a process called the ‘patina effect,’ where we aged the sound. Then we added an echo, like in a’40s movie theater.”

“‘Soul’ presented a different challenge,” Klyce goes on. “The story follows a middle-school band-teacher who dreams of becoming a professional jazz musician — in contemporary New York City, then in pre-and-post-life realms: the Great Beyond and the Great Before.”

But I cannot imagine any film topping “Sound of Metal,” where Nicolas Becker’s sound design is crucial in depicting loss of hearing.

“How do you create sound design for a film that hinges on silence? The most powerful scene in terms of sound is the last one, which ironically has none at all,” declares Becker. “When (Riz Ahmed) removes his implant — and there’s nothing.” 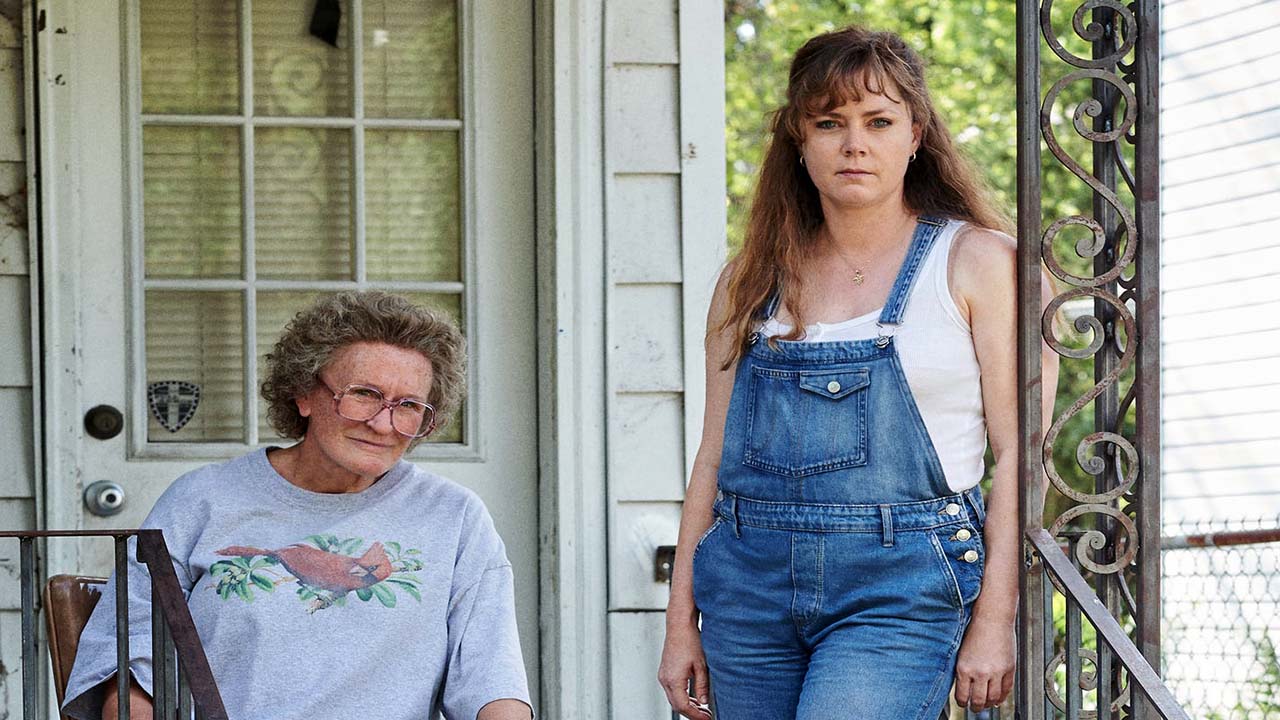 Mia Neal and Jamika Wilson confess: “There’s not much photographic evidence of Ma Rainey, at least not in a way that reveals how she felt about makeup and hairstyling, so when (costumer) Ann Roth mentioned that Ma wore a horsehair wig, it was a green light. It’s extremely wiry and thick but it softened when baked in a wig dryer for a couple of days and was finger-waved … and her constant sweat tells a story of its own.”

Viola Davis told the make-up artists: “Just think of (Bette Davis) in the movie ‘Whatever Happened to Baby Jane?’ and throw in some gold teeth.”

Also in that category is Eryn Krueger Mekash, transforming Glenn Close and Amy Adams into hardscrabble women who lived with poverty for generations in “Hillbilly Elegy.”

You can see the 93rd annual Academy Awards on ABC-TV on Sunday, April 25.