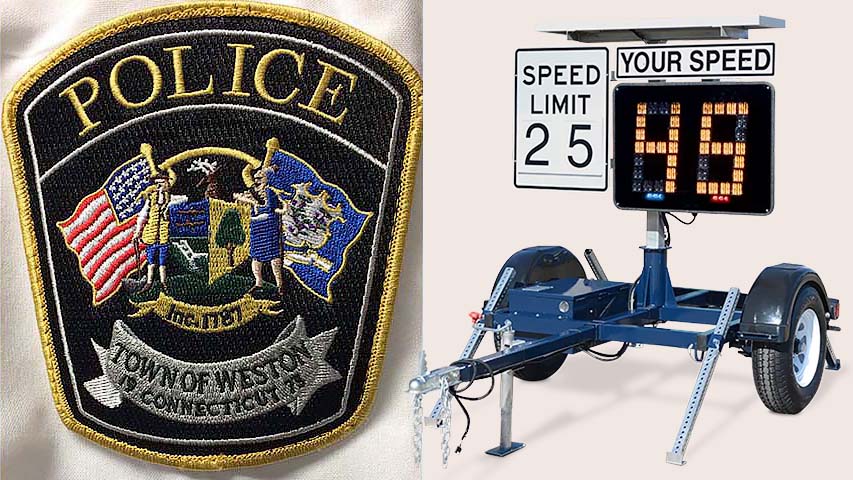 The Weston Police Department is stepping up traffic enforcement and responding to citizen complaints about speed and dangerous driving, conditions that Chief Edwin Henion says are common throughout the region.

“It’s not just Weston, and it’s not just a matter of writing more tickets,” said the chief. The department’s numbers do show an increase in citations and verbal warnings, but also a greater number of traffic enforcement posts that increase visibility of the police presence.

All are parts of a town’s overall traffic control strategy, said Chief Henion, which also includes making sure signs are visible, educating the public, collecting data, and dealing with known issues.

Also known, or at least generally accepted, is that drivers on Weston roads are less constrained by speed limits, less attentive to stop signs, and perhaps less cautious about passing in areas where doing so is legal, but possibly unwise.

“It’s a safety concern for drivers and also for pedestrians,” said Chief Henion. “And a lot of people are out walking.”

Assignments are also informed by monitoring equipment. The department’s data capabilities have recently been enhanced by the addition of two more traffic radar trailers, acquired with $25,000 donated by a resident.

These are the trailers you have probably seen on the side of roads. Their large signs flash a vehicle’s speed, which may encourage drivers to slow down. But their other purpose is to record data about speeds and vehicle volume at all times of day, giving police insight about problem areas.

By far, however, concerns about speed and dangerous driving are on majors like Weston, Georgetown, and Lyons Plain roads. Passing is also an issue.

Members of the public brought concerns about Weston Road and Georgetown Road, each part of Route 57, to the Board of Police Commissioners on July 5. Commissioners heard comments about dangerously excessive speeds on both roads. On Weston Road in particular, there was urgent concern about areas where passing is permitted.

The Police Commission is the local traffic authority. Commissioners heard calls to reduce and make uniform speed limits on Georgetown Road, eliminate the passing zone on a part of Weston Road, and post signs forbidding passing there.

The commission can do none of those things. Route 57 is a state highway, subject only to the authority of the Connecticut Department of Transportation.

What the commission can do is request that DOT conduct traffic studies to determine if speed limits, passing lanes, and signage need to change on Route 57. Chief Henion formally submitted that request last week.