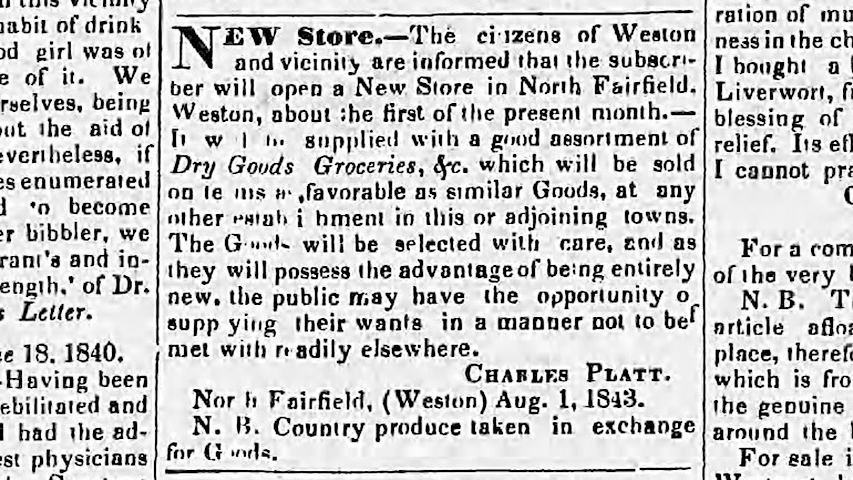 Special thanks to Dallas Kersey

We thought we were the first to bring news of a new market in Weston. Not so fast.

Thanks to our friends at Weston Historical Society, we now know that the Norwalk Gazette got there before us. By 179 years.

The following announcement (image above) appeared in the Gazette in September of 1843:

New Store. — The citizens of Weston and vicinity are informed that the subscriber will open a New Store in North Fairfield, Weston, about the first of the present month. It will be supplied with a good assortment of Dry Goods, Groceries, etc., which will be sold on terms as favorable as similar Goods, at any other establishment in this or adjoining towns. The Goods will be selected with care, and as they will possess the advantage of being entirely new, the public may have the opportunity of supplying their wants in a manner not to be met with readily elsewhere.

We do not know if Lily’s Weston Market will exchange produce for Goods, but you can ask. We are confident their Goods will “possess the advantage of being entirely new.”

Other news in that issue of the Gazette included advice to avoid cheap imported tombstone material and testimonials for Dr. Richardson’s Bitters as a cure for ailments such as “derangements of the stomach and bowels.”

Also, word of a new 25-cent fare for a steamship commute to New York City, other transport by sloop, ads for books, coal, farm and horse supplies, plaster and toothpaste, news of a washing machine patent, and a notice about what someone must do to claim their sick steer. 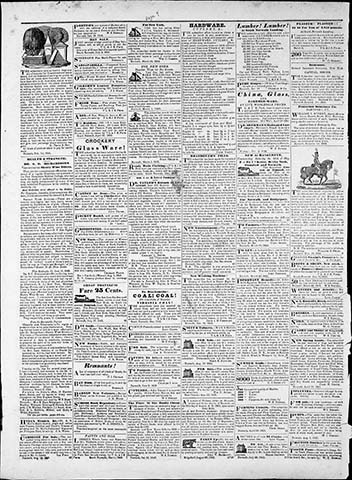