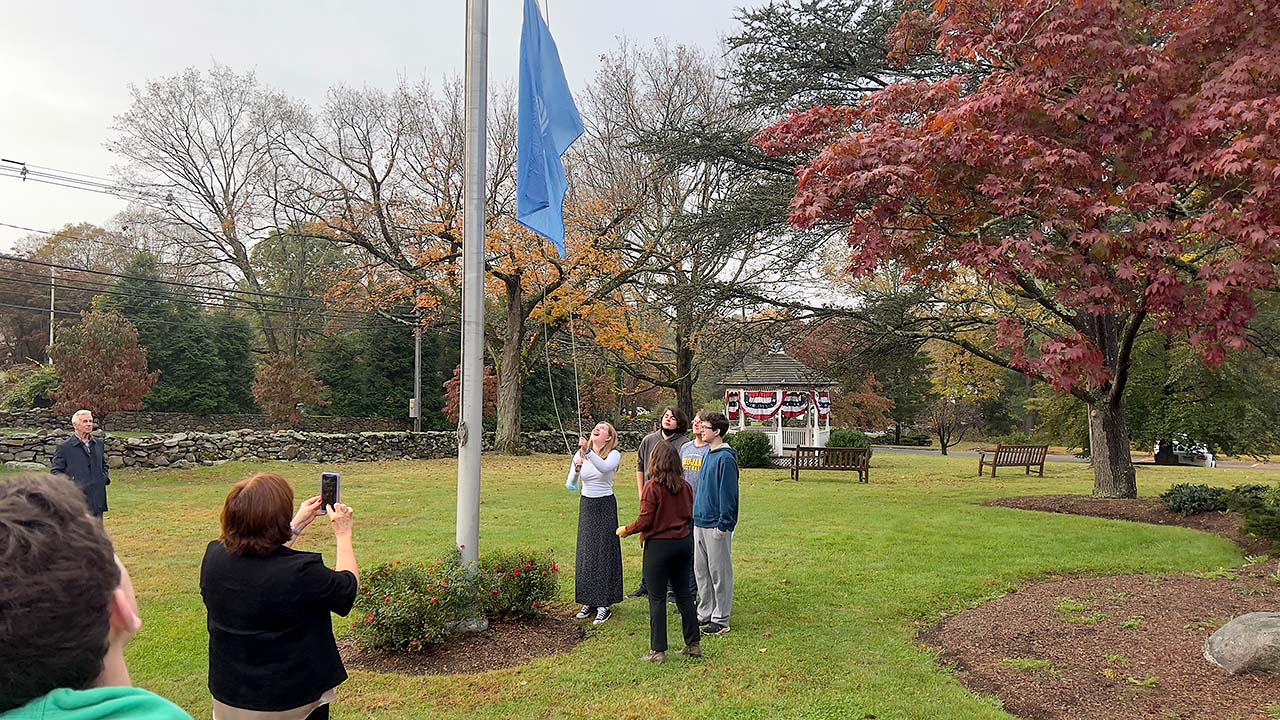 The 76th anniversary of the founding of the United Nations was observed on October 25 at a flag raising and ceremony at Town Hall. 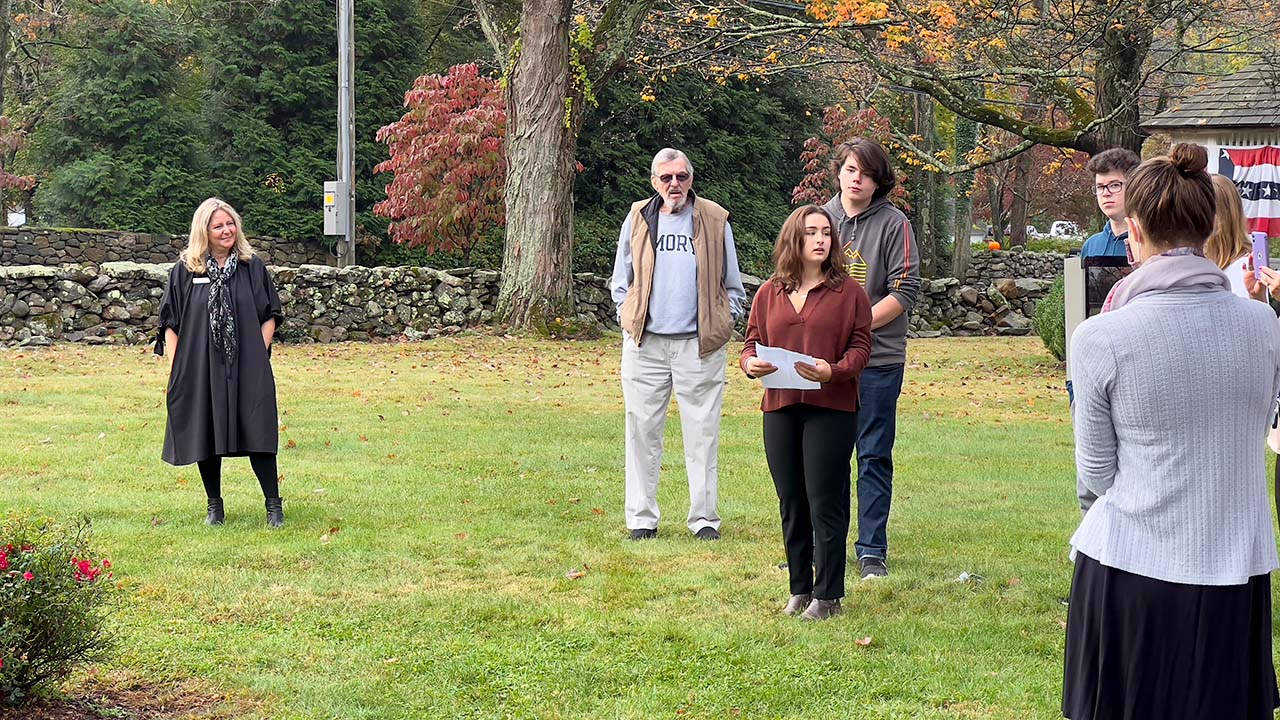 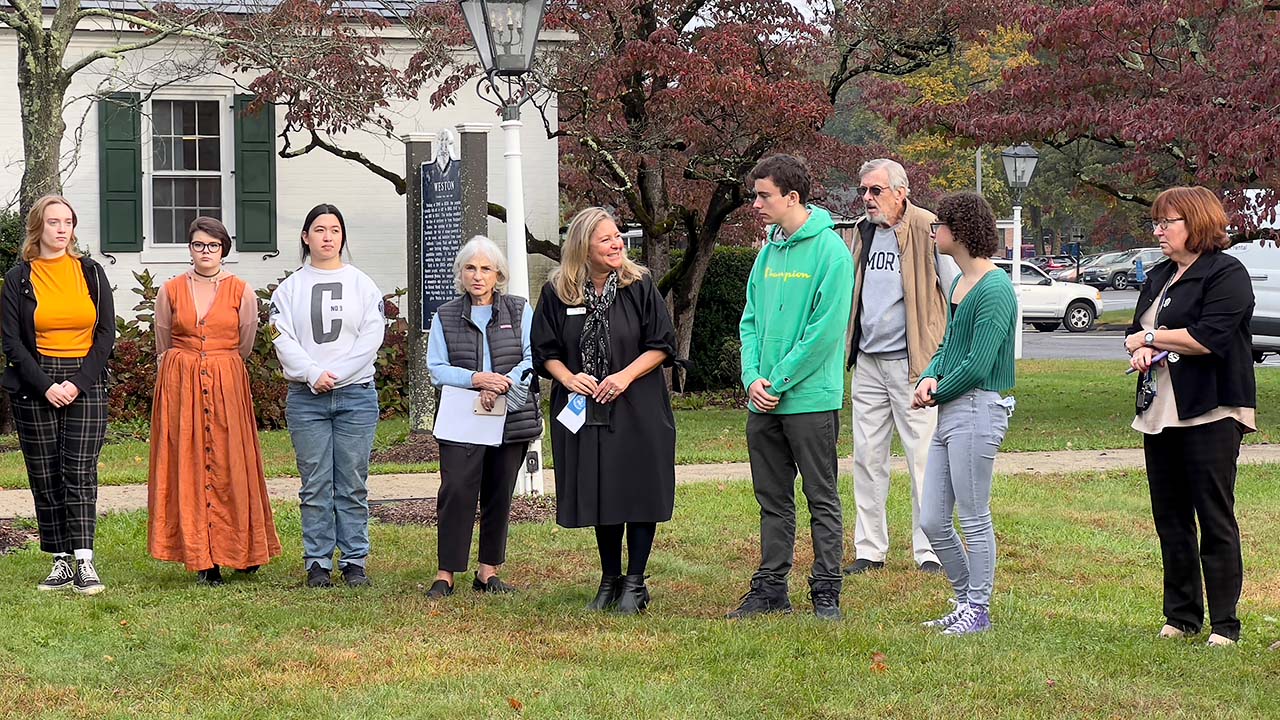 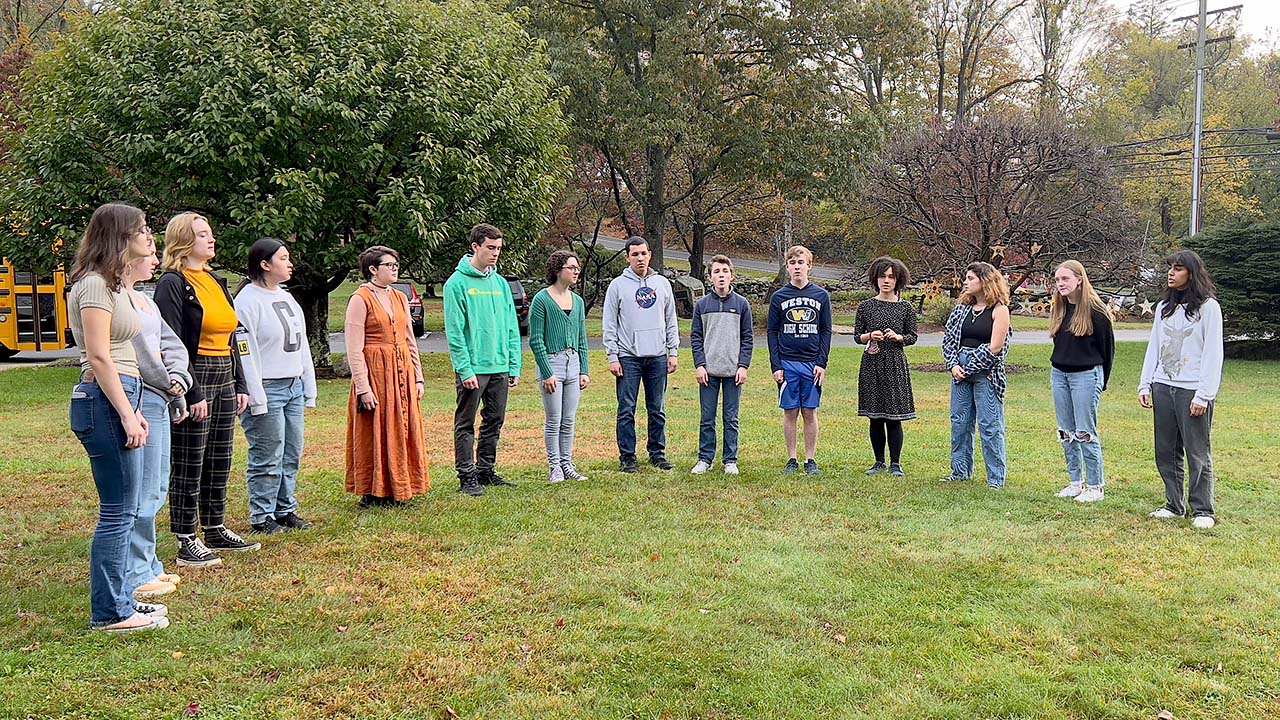 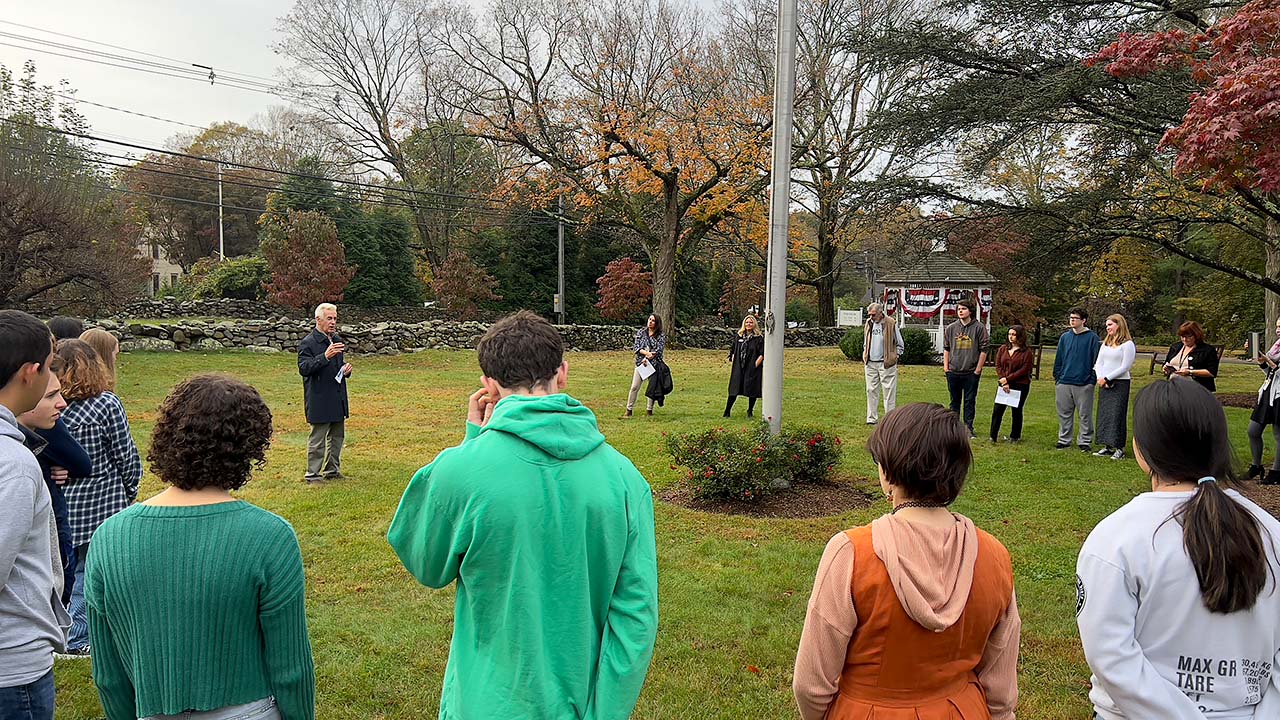 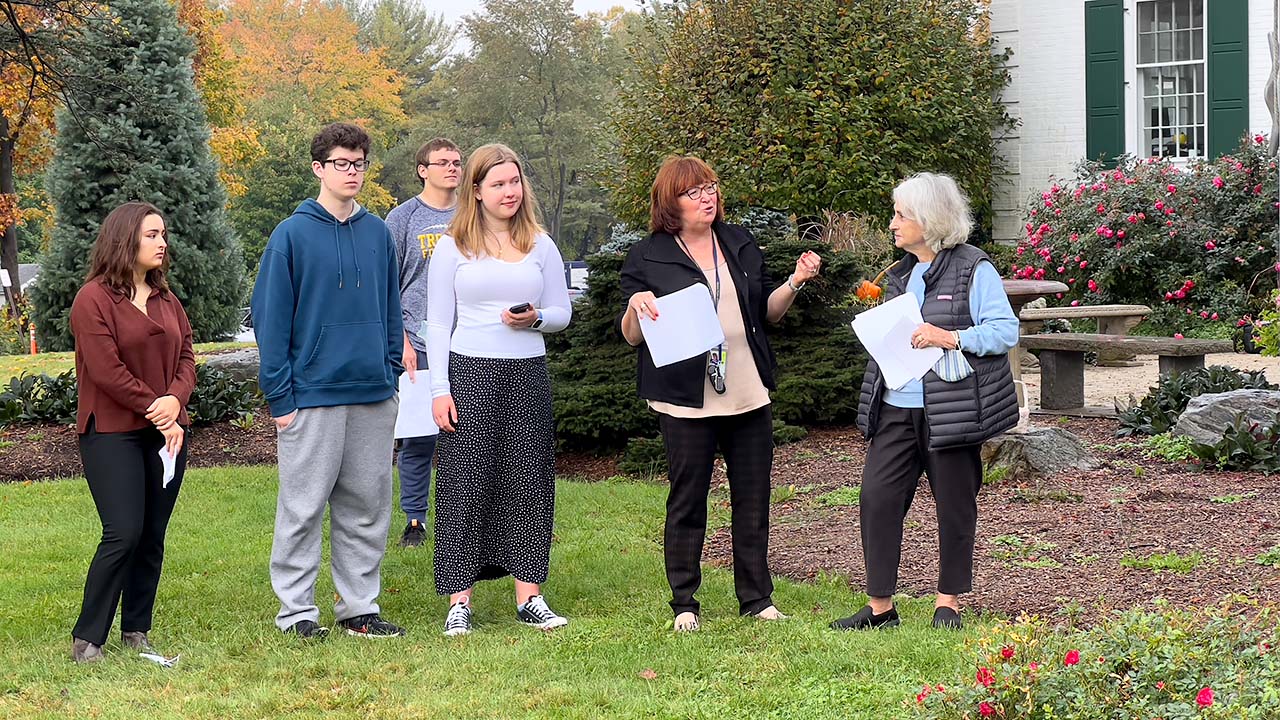 The United Nation’s anniversary was celebrated around the country. In Westport, Aye Aye Thant, daughter of U Thant, the third secretary general of the United Nations, delivered the following remarks.

First, I would like to extend my appreciation to our Selectman Jim Marpe for his support throughout the years to our Chapter. Westport is on the map of the UN as an International Hospitality Town.

It is always a wonderful sight to see all the Flags of the Nations flying proudly under one sky on the Ruth Steinkraus Cohen Bridge. It reminds us that we can co-exist side-by-side, while being proud of own national identity and heritage.

UNA-USA, in fact, is older than the UN. It was founded in 1943 in the midst of WWII to get support for the international organization from Congress. The UNA Chapter of Westport-Weston was established on May Day of 1958 after Ruth attended a lecture by Mrs. Eleanor Roosevelt at the Long Lots Junior High School in Westport prior to the dinner where Ruth served as the chairperson.

On the 25th anniversary of the UN, 51 years ago to be exact, my father, U Thant, at the commemorative dinner in San Francisco said, “The United Nations is today facing a crisis of confidence. This disillusionment with the United Nations is perhaps,” he said, “because too much had been expected of the organization when much of the trouble the UN faced was caused by the refusal of governments to place collective responsibility above national self-interest.”

Even though the Charter empowers the Secretary-General to bring issues to the attention of the Security Council which are likely to threaten international peace and security, this was invoked only once. My father said it would be divisive and useless to bring these issues to the Council if there was no possible way Council would agree or take useful action.

But, he said, much of Secretary-General’s time is spent outside of public view, during informal and confidential activities through what is called the “good offices of the Secretary-General.”

The Cuban Missile Crisis is one good example when the Secretary-General himself decided that it was his duty to offer his good offices, even though no specific request was made to him. My father wrote that “the enormous and imminent dangers of the crisis impelled me to offer my good offices.”

The concept of internationalism, as is embodied in the Charter, is sometimes viewed with resentment or little enthusiasm by people and governments. My father, on occasion, remarked that in this interconnected world, it is a dangerous illusion to believe that life can be safe without that concept and without a world organization, like the United Nations, which embodies it.

The United Nations’ system provides the best available and workable method through which nationalism and national sovereignty can evolve while keeping pace with the interdependent world.

I am very happy to see young people here today. The UN was founded to save the succeeding generations from the horrors of war that was raging at that time. With that same spirit, as we go forward to the post Covid era, this year’s theme for UN Day is “Creating a Blueprint for a Better Future” — a better future for succeeding generation.

We, the not so young generation, should commit ourselves to fulfilling the desires and inspirations of the younger generation so they can live in a better, peaceful, and healthy environment without compromising. It would be a regretful and sorrowful world if the next generation has to “clean up the mess us adults made” (as expressed by Greta Thunberg).

We need your voices for your future. Become Citizens Goodwill Ambassadors and create new blueprints, so that in another 76 years the UN’s birth anniversary will be celebrated in a better, prosperous, and healthy world.

May I conclude with my father’s aspiration for world’s peace when he said, “We have to learn to understand each other and to develop a spirit of “One World.”