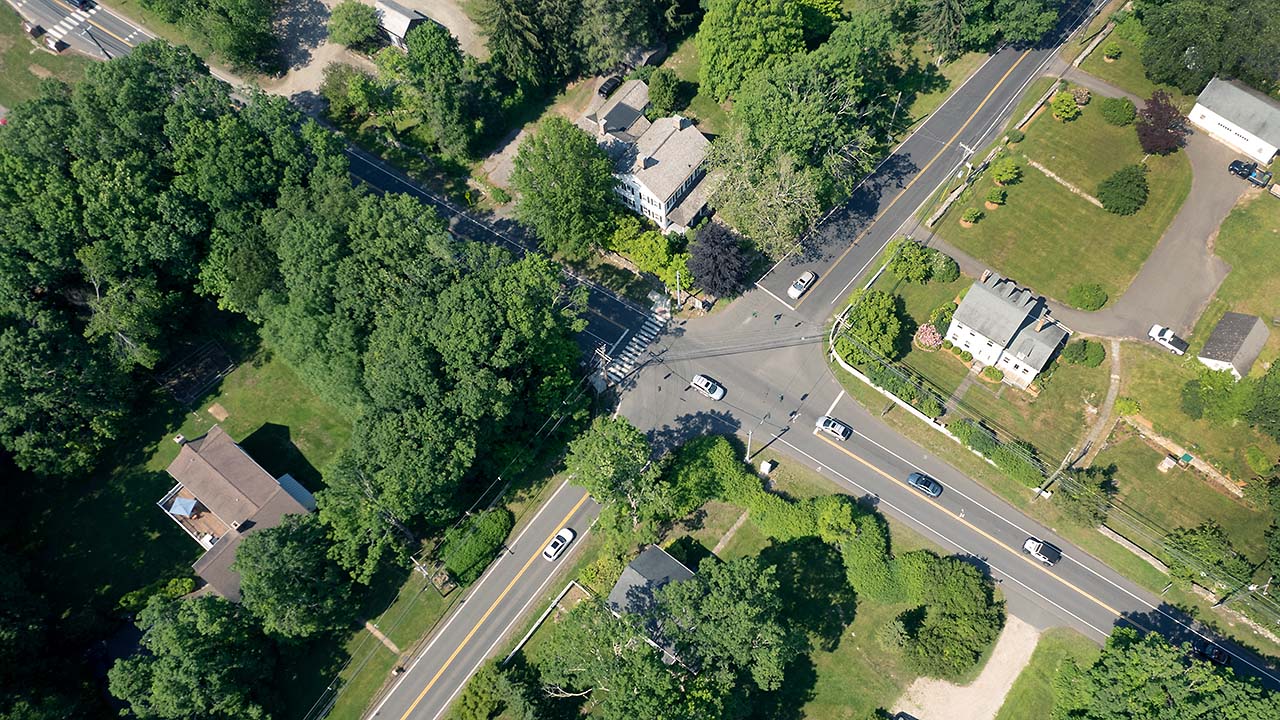 Establishment of a Village District to possibly increase commercial development in the center of town is on the agenda of a Planning and Zoning Commission public hearing on Monday, October 4 at 7:15 pm.

Links to relevant documents appear at the end of this article.

The plan on the table represents the first major change in Weston zoning since regulations were first enacted in 1970. It also includes options for diverse housing and anticipates increased connectivity and pedestrian activity.

An advantage of a Village District under state law is that local planning authorities can determine permitted uses and architectural standards within its perimeter to ensure consistency with the character of the town. P&Z’s draft plan has essentially been in the works for over three years as the commission created the ten-year Plan of Conservation and Development, beginning with a series of steps to gather input about public sentiment.

P&Z anticipates acting on the proposed Village District this month, after hearing from the public on Monday. If the draft plan or an amended version is adopted, the Village District would include the four corners of Weston and Norfield Roads, go up Weston Road (Route 57) past the Onion Barn to School Road, cross 57 to include the shopping center and the undeveloped land behind it, and then go up Norfield to Willow Drive, which is approximately across the street from St. Francis of Assisi church.

Properties directly on the four corners and which front Weston Road will be part of a sub-district limited to commercial or mixed use. Mixed use is defined as commercial on the first floor and residential on the second.

P&Z’s draft plan specifically anticipates permitting (upon approval of applications) some commercial uses within the district and excluding others.

The draft regulations include limits on the height of buildings in the Village District (35 feet) and set a maximum size (11,000 square feet) for the non-residential portion of structures. Second-floor apartments in mixed use buildings are limited to two bedrooms. Lots must be at least one acre, restaurants are allowed outdoor seating, and parking is intended to be behind buildings, ideally in a shared arrangement.

A requirement for affordability specifies that in any development with five or more dwelling units 15 percent must meet the affordability standards set forth in state law.

A side note: as a separate matter regarding affordable housing in town beyond the Village District, at some point before the end of this year P&Z will have to decide whether to opt out of a new state law that requires towns to allow homeowners to have detached apartments (“ADUs,” accessory dwelling units) on their properties. The law allows towns to opt out by a two-thirds majority vote of both P&Z and the Board of Selectmen.

Applications for development in the Village District will be subject to architectural review aimed at preserving Weston’s New England character, promoting sustainable design, and ensuring that development is compatible with existing historical structures.

The general idea is that applications will be submitted to an Architectural Review Board consisting of residents who have backgrounds in architecture, construction, engineering, or similar disciplines that require or develop expertise in analyzing drawings and styles. As we understand it, a hope is that volunteering for the board will be particularly attractive to younger residents who see living in Weston as a long-term prospect, thus giving them a stake in how the town grows and develops in the future.

Zoning can only make development possible. Whether and when developers will invest is anyone’s guess. Except in one case. 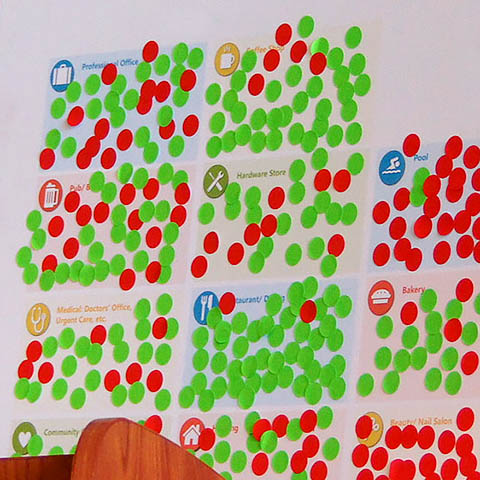 Throughout the planning process, the four corners of Weston and Norfield Roads received considerable attention from P&Z and the public. From the very first of several charettes — public meetings designed to learn the preferences of citizens — residents made clear a strong preference for a restaurant, cafe, or gathering space in the area.

In the first charette in April of 2019, red stickers on a poster of choices were things people said they didn’t want. The board was green with yes votes for a place people could eat and gather.

Development at three of the four corner properties seems unlikely anytime soon, if at all. One is owned by Norfield Congregational Church, one is a private residence, one is the town-owned Jarvis house, currently in use as Parks and Recreation offices. 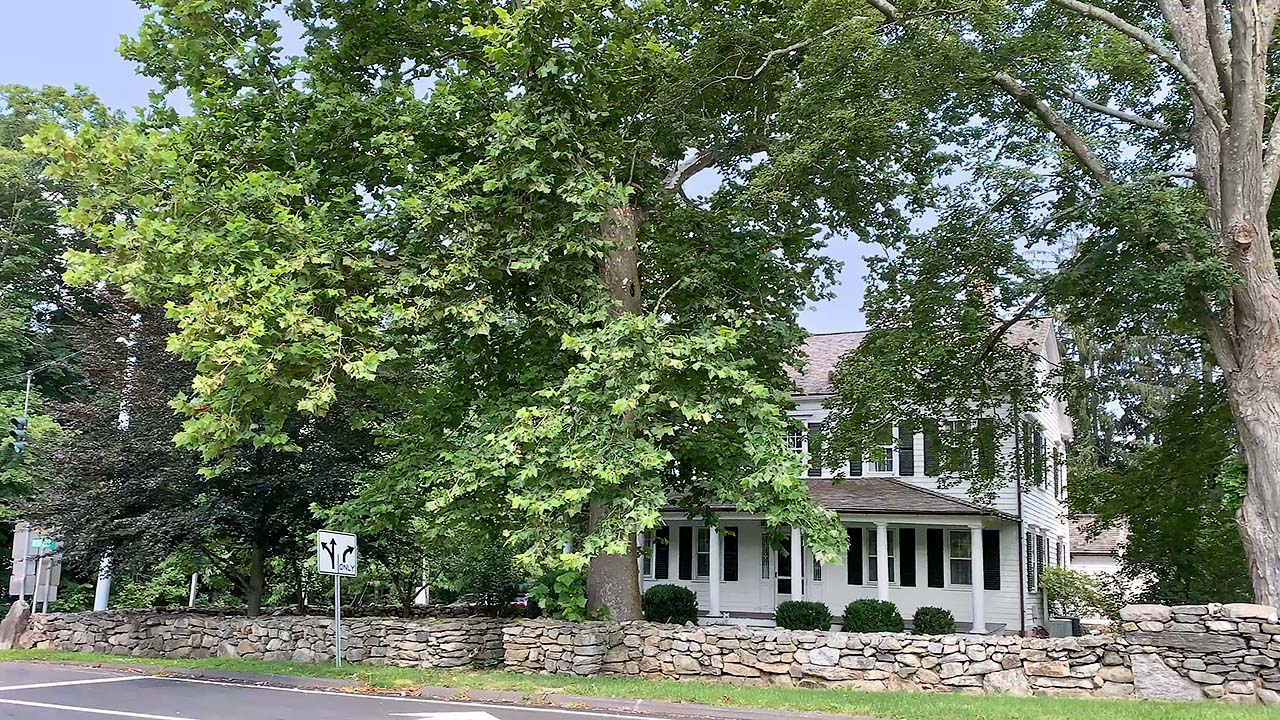 But 48 Norfield Road, the Georgian house next to the Onion Barn, seems most likely to be the first new commercial feature of a Village District, if one is created, and if a permit is eventually granted by P&Z for what Jess DiPasquale, the property owner, has in mind. Mr. DiPasquale has his work cut out for him, so his intentions won’t materialize right away, but he is eager to get started.

He hopes to open a pub or restaurant that might, during the day, also have meeting rooms where people can interact or work, perhaps something along the lines of a WeWork space.

In addition to developing a specific design and set of plans, Mr. DiPasquale will have a traffic study performed. He will need a variety of permissions and health department clearances, and his eventual application to P&Z for a special permit would have to include a parking plan that meets the Commission’s criteria.

The legal notice of P&Z’s hearing can be found here.

Presentation slides for the hearing can be viewed and downloaded here.

The proposed new zoning regulations, with changes lettered in red, are here.

These and a number of previous documents and meeting minutes are available here.