Police Commission Statement to the Community 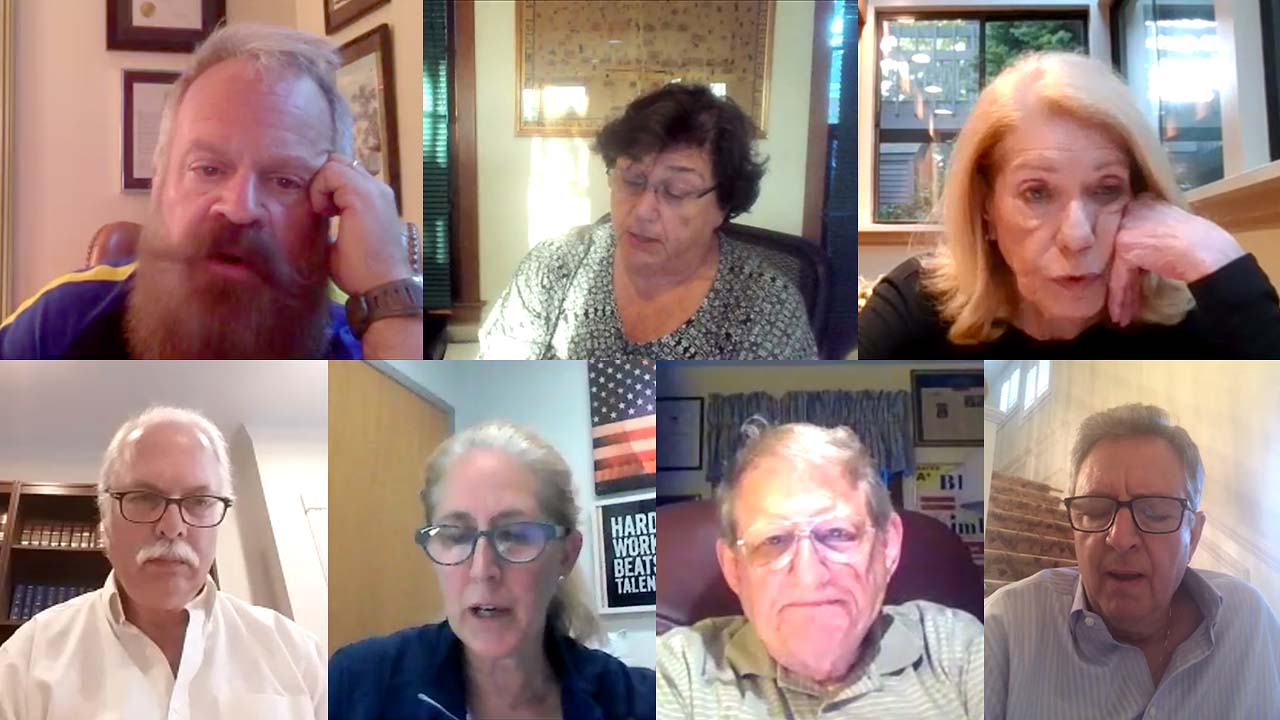 Editor’s Note: On May 24, the Board of Police Commissioners drafted and approved the following statement regarding the complaint filed by Weston resident Walter Simpson.

To the Weston Community at Large:

We would like to thank all the community members and in particular, Walter & Aria Simpson, who attended our May 6th Police Commission webinar to talk about the 911 call made regarding suspicious activity, the immediate police response and the process by which a complaint was submitted and investigated.

There were many questions that evening, but we felt it was our time to listen clearly to as many participants who wanted to contribute and to speak as possible. We as a Board do not want to diminish in any way the sentiments, feelings, emotions or pain that were expressed during the webinar.

We would like to provide some answers to questions that were raised and to provide commentary regarding the timeline as requested by many. We would also like to identify where policies need to be reconsidered or strengthened, as we acknowledge that the authority of the Police Commission depends in no small measure on maintenance of the public trust.

Following are details regarding the timeline as they relate to the incident of November 21, 2019 and the period since:

On November 21, 2019, a 911 emergency call was made to the Town’s Dispatch Center (“Dispatch”) regarding a suspicious person going through mailboxes on Lords Highway and Laurel Lake West. This call was made at a time when residents of Weston and surrounding towns were reporting thefts of checks and other mail from mailboxes to the Weston Police Department (“WPD”), either directly or from the Post Office (via the Postal Inspector).

We also note that the WPD regularly receives calls regarding suspicious persons — since 2002 there have been a total of 1,254 calls or nearly 6 per month; the November 21st call to Dispatch came in as a suspicious person call.

An officer was dispatched in response to the 911 call. The caller reported a suspected larceny, i.e., that the individual was going through multiple mailboxes rather than an individual mailbox. Had it been the latter, the call might have been dismissed as not sufficient to warrant the dispatch of an officer.

After the officer arrived and assessed the situation, he called off backup support within one minute as unnecessary. The officer approached Mr. Simpson, asked for his ID as per normal procedure. Mr. Simpson did not have ID with him, but a neighbor speedily identified Mr. Simpson, after which the officer left the scene. The total time of the incident was 4 minutes 58 seconds per Dispatch records.

On November 22, the Chief pulled and reviewed the 911 tape, reviewed the Dispatch log and spoke to the responding officer.

Subsequent to the meeting, Chief Henion provided Mr. and Mrs. Simpson with the 911 tape verifying that the officer was dispatched in response to the 911 call and that the officer did not initiate the interaction himself. Copies of the dispatch log and the officer’s supplemental report were also provided to the Simpsons. At that time, the Chief believed that he had addressed Mr. Simpson’s concerns and demonstrated that the officer was not driving by and, in effect, profiling Mr. Simpson while he was engaged in an everyday activity.

The officer who responded to the call contacted the 911 caller on November 22 and explained that Mr. Simpson was a neighbor and a fellow community member and had every right to be at his mailbox.

The Chief reported this incident to both the First Selectman and the Police Commission (“Commission”) at the next regularly scheduled meeting of the Commission. For the next eight months, the Chief was under the impression the incident had been resolved based on his conversations immediately after the incident with Mr. and Mrs. Simpson. The Commission did not discuss the matter further during this period in the belief that the matter had been resolved to the Simpsons’ satisfaction.

For the next eight months there was no contact with the WPD. Neither Mr. Simpson nor the WPD initiated contact about the incident.

In the aftermath of the murder of George Floyd in late May 2020, and with renewed public focus on the deaths of numerous other Black individuals around the country during encounters with the police, discussions were taking place in the community and in the country as a whole.

At a June 18, 2020 meeting of over 100 people organized by Weston Residents of Color (via Zoom) and Reverend Bernard Wilson, attended by Captain Matt Brodacki and Police Commissioner Beth Gralnick, Mr. Simpson inquired about the November 2019 incident and learned that it was not being proactively investigated. Mr. Simpson then filed a formal written complaint on July 20, 2020.

Before, during and after the written complaint was filed, the WPD was significantly hit with multiple COVID cases and shortage of police officers. At one point the 911 center had to be closed and Weston's Dispatch moved to an alternative location and was staffed by a neighboring town’s Dispatch. The Chief, who is responsible for investigation of all complaints per Policy #A0007 (drafted and in compliance with state statute and Policy Officer Standards and Training Council), was hospitalized for nearly a month and out of work for 11 weeks.

The officer who responded to the November complaint was ill and out of work for 10 months, until February 2021. In total, the department was without approximately half of its full staffing due to either illness or quarantine for a substantial portion of the timeframe in question. The pandemic had a significant impact country-wide, and the WPD was struggling to maintain appropriate staffing levels.

The Commission was apprised of the written complaint and due to the continued illness of the responding officer, it was not possible to complete the internal affairs investigation. The chief notified Mr. Simpson on December 27, 2020 that the responding officer was still out on sick leave.

The internal affairs investigation that began in July 2020, showed that both Mr. Simpson and the officer shared essentially the same fact pattern, arguably differing on only three points: (1) the tone of the officer's voice, (2) the proximity of the officer's hand to his duty belt/gun and (3) whether the incident ended with a handshake between the officer and Mr. Simpson. Both descriptions are subjective; the internal investigation did not disclose any violation of policy or procedure and neither item is a violation of the Connecticut Statute or policy.

This timeline is just that, a timeline. It is not the intent of the Commission to diminish or negate the perceptions of communications or actions.

Weston has not had a history of complaints being filed against either individual officers or the WPD as a whole; the current situation has shined an intense spotlight on where the gaps in implementation of existing but untested practices exist and where improvements can be implemented.

Our Commission is committed, within an expedited but deliberate timeframe, to ensure that existing policies and procedures are implemented in practice.

Specifically, policy #A0007 stipulates that a written notification of the disposition of a complaint be produced and presented to the complainant. This was not done in this case after the initial complaint was verbally communicated in November 2019; it is clear to the Commission that this omission was responsible for much of the subsequent confusion and frustration experienced by Mr. Simpson, and ultimately by many other members of the community.

Eight months after submission of the written complaint, and with the officer involved still out of work, the internal affairs investigation was delayed. Ultimately, after speaking with the officer, it was determined that the officer had not violated policies and procedures, notwithstanding disagreement over subjective interpretation of tone of voice and/or stance of the officer.

The internal affairs investigation determined that there was no use of force, Mr. Simpson was not detained, there was no harsh language or use of profanity by anyone, the officer called off backup and cleared the scene less than 5 minutes after arriving. Insofar as the officer was directed to the scene by dispatch, as a result of the 911 call by a Weston resident, the responding officer was not engaged in racial profiling when he approached Mr. Simpson on November 21, 2019.

We as a Commission are committed to ensuring that complaints are answered promptly. In this instance, it has become clear that the implementation of the policy must be improved. How do we adjust our general practices and policies? There have been several suggestions:

Body cameras: We fully support the state-mandated body cameras policy, which must be fully in place by July 2022. We began the process of selecting a vendor six months ago and are working with industry-leading camera companies to ensure our officers and the community can memorialize actions and provide a tool to access full transparency for all stakeholders.

Clearly, had body cameras been in place in November 2019, much of the subjectiveness of the complaint would be eliminated. Discussion of vendor selection and details of the services to be provided continued at the Commission’s Special Meeting on May 18; discussion will continue at future meetings to review RFP submission to select the most appropriate system.

Policies regarding Suspicious Person Calls: Since 2002 WPD has responded to over 1250 calls of a suspicious person or persons. This type of call comes in weekly. While it is appropriate for an officer to respond to all calls where a potential crime is being committed, we do not believe that simply engaging in a daily activity constitutes a reportable event.

It is clear to the Commission that the initial report stating “he just looks a little bit suspicious to me” can be deemed to be biased in nature, despite claims by the caller to the contrary. Other surrounding towns have adopted changes in policy to address this issue. Weston residents have requested something similar: that unless an actual crime is observed, police should no longer be dispatched to respond to such reports.

The Commission fully supports the provision of the Police Accountability Bill that penalizes the misuse of the 911 emergency system to report a false alarm or complaint “because of the actual or perceived race, religion, ethnicity, disability, sex, sexual orientation or gender identity or expression of such other person or group of persons.”

Training: Every three years our officers are required to complete in-service training. Additionally, on two dates in April 2021, our officers participated in the Police Engagement Program developed by the Stratford Police Department and the Stratford PAL, focused on reduction of use-of-force occurrences, de-escalation techniques, cultural awareness and implicit bias.

A discussion is in the works regarding the timing of phase 2 of the PEP to help raise awareness for citizens in the community regarding personal unconscious bias, police engagement, and community perceptions and interpretation of police actions.

Policy Review: The Commission will undertake a thorough review of the complaint policy, including a provision that where appropriate witnesses be interviewed in a timely manner.

The Commission and the Police Department have undertaken additional initiatives:

Moving Forward: What does the Police Commission need to do in the future?

At this point, the Commission must engage in resolving the following matters to ensure that whatever errors or gaps in the process are eliminated:

A number of lessons have been learned and policies will be reviewed and amended to ensure that any future complaints are handled as expeditiously and transparently as possible. The Commission is confident that the officers of the Weston Police Department are as interested in fair and honest policing as are members of the community, and it remains the job of the Commission to ensure that all members of the community feel safe and protected in an environment free from discrimination or bias.