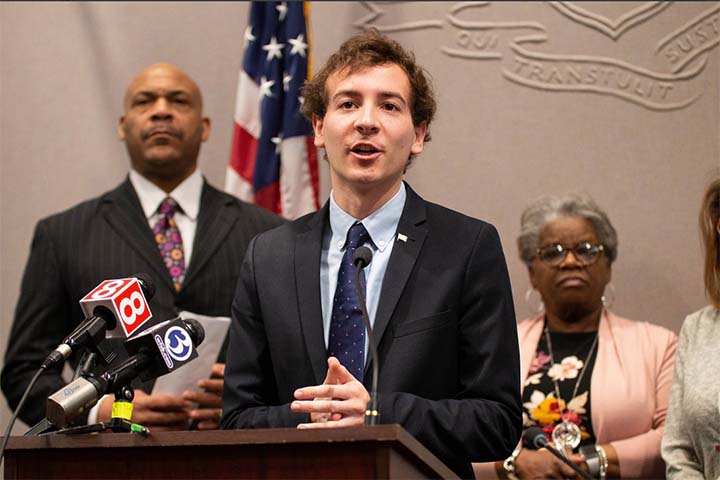 Believe it or not, it looks like the 2020 election is finally in the rear view mirror. Despite the partisan rancor that kept us up at night in the weeks before and after the election, I think we all have a reason to be proud.

While some fretted that the Covid-19 pandemic would imperil our democracy, countless heroes stepped up to volunteer at the polls.

Civil servants at Town Hall worked overtime to process a constant stream of absentee ballots. And most importantly, a record number of voters made their voice heard.

I spent Election Day meeting voters at the polls, and it was clear we didn’t all agree on every issue. But we were united in our belief that democracy functions best when everyone has a chance to participate.

In this state, it looks as though almost 80 percent of registered voters either came out to vote or mailed in their ballot. In fact, the 2020 election saw 133,000 more voters than the last presidential election.

I am especially proud of the turnout in the Senate district I represent. More than 66,000 people voted in the 26th district, more than any other State Senate district in Connecticut. For an area with about 100,000 residents, that level of turnout is extraordinary. It amounted to around a 9,000-vote increase from just four years ago.

“Voting had never been more convenient thanks to the steps we took.”

Of course, it’s no surprise that voter turnout surged this year. Voting had never been more convenient thanks to the steps we took in Connecticut to allow voters to participate safely. Due to the pandemic, all registered voters were allowed to participate via absentee ballot.

For the first time in Connecticut’s history, no one needed an excuse to vote from the comfort of their own home. Given this new level of convenience, people stepped off of the sidelines and built a government that is more inclusive, more functional and more representative.

Sadly, those reforms were only temporary. In 2022, we’ll go back to the same archaic election procedures that have kept so many away from the ballot for so long.

That is, unless we decide to do better.

“Let’s make it easier for seniors, students, parents and commuters to stay engaged.”

Why should we roll back this progress toward building an accessible democracy? Why, in 2022, should we remove an option that thousands of Connecticut residents availed themselves of in 2020? Let’s make it easier for seniors, students, parents and commuters to stay engaged by maintaining no-excuse absentee voting and bringing early voting to Connecticut.

In a normal year, Connecticut is one of only ten states in the country that offers only one day in November to participate in the democratic process. Red states and blue states across the country provide voters with an opportunity to cast their ballot on a date that’s convenient for them.

But sadly, a constitutional amendment to allow early voting and no-excuse absentee voting here in Connecticut did not receive the 75% of votes in the House and Senate necessary to advance to the next stage—a referendum for voters to consider.

So, the legislature will take up this issue again in the 2021 session. I urge all of my colleagues to give this legislation the unanimous support it deserves. We may walk into the building with diverse perspectives and different priorities, but, given our line of work, I imagine we all agree that our democracy is stronger when more people participate, not fewer.

Many of the 66,000+ people who voted in my district didn’t vote for me. And I celebrate their participation, too. The fight to modernize our election isn’t about fighting for one party or one candidate. It’s a fight to build a bigger and better democracy, regardless of who the voters support. It’s time for Connecticut to recognize that the right to vote is meaningless without the opportunity to vote.