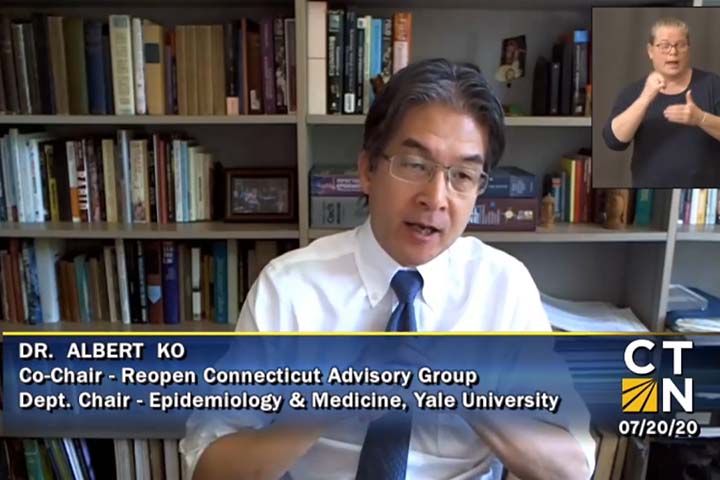 A South Korean study of the transmissibility of COVID-19 by young people "is concerning," said Dr. Albert Ko of Yale University, as is Israel's experience reopening schools. But for State Education Commissioner Miguel Cardona, the findings "reinforced our plans." 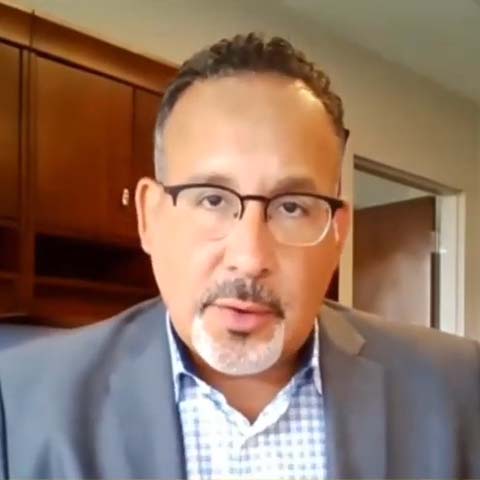 Dr. Ko and Commissioner Cardona (photo, left) spoke In a conference call with Governor Ned Lamont and reporters on Monday afternoon. Dr. Cardona confirmed that parents reluctant to have children attend school in person will have the option of all-distance learning.

The commissioner was less optimistic that teachers concerned about returning to campus would have a similar choice. "It's a challenge," he said. "There are no easy answers." At least "in some cases," said Dr. Cardona, educators may have the opportunity to teach remotely.

Dr. Ko, who chairs Yale's Epidemiology and Medicine department and co-chairs the governor's Reopen Connecticut Advisory Group, said the Korean study of households with 10 to 19-year-old students upended previous assumptions about the severity and transmissibility of the coronavirus among young people.

It has long been known, said Dr. Ko, that the spread of influenza is largely driven by children. But in the case of COVID-19, the prevailing view had been that children were at low risk of severe infection and complications and were less likely to transmit the disease.

Dr. Ko said that may be true for children below the age of ten, but the Korean study indicated the risk of transmission in the 10-to-19 age group is as high as it is for adults. "Maybe higher."

Commissioner Cardona said the Korean study reinforces the State mandate that, with few exceptions, students and teachers must wear facial coverings in school.

Reports of a surge of COVID infections in Israel after schools reopened were less definitive for Dr. Ko, who said it may be "true, true, and unrelated." Many other Israeli facilities opened at the same time, he said, making it "difficult to disentangle" the factors. Governor Lamont pointed out that confirmed cases in Israel were already rising before schools reopened.

"We can't tell if schools will drive transmission," said Dr. Ko. When asked if young people are responsible for the increase in various parts of the country, he said "we suspect that's the case, but we don't yet have comprehensive data."

Intense testing in schools, said Dr. Ko, "would not be a Berlin Wall" that prevents exposure. He explained that a person can be infected with COVID-19 but not secrete the virus, meaning he or she would not test positive.

Decisions coming, all depending

School districts have until Friday to submit plans to the Department of Education for three models of education in the fall: full reopening, a hybrid of classroom and distance learning, and standalone distance learning.

Commissioner Cardona confirmed that a decision about reopening will be made "in early August," in concert with health authorities and, ultimately, Governor Lamont.

The governor cautioned that, even then, "we won't know for sure for several more weeks."