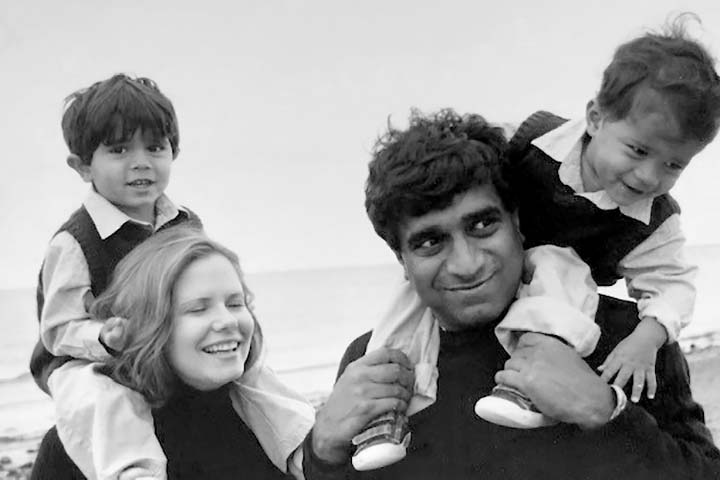 Whether it was dismantling a thorny algebraic structure or navigating past a similarly stinging Huckleberry bush on a 12-mile hike through the Connecticut back country, Rajan had a gift for living in the moment. ‘Raj,’ as known to his friends, was a life-long learner, whose intellect was matched only by his radiance, warmth, and incalculable ability to put anyone at ease. He died in a car accident on May 21, in his hometown of Weston, Conn. Rajan was 59.

Born in Berhampur, India, to a physics college lecturer and a social studies schoolteacher, Rajan immigrated to the US when he was only 6. He grew up in Montgomery County Maryland, where he enjoyed spending time with friends, playing basketball, running cross country, and doing mathematics.

His love for mathematics drew Rajan north. He attended Columbia University and received a bachelor’s degree in Mathematics in 1982. At Columbia, he enjoyed playing squash, being with friends, eating good pizza and working in the mathematics and anthropology departments.

His pioneering spirit next pulled Rajan west, where he continued his academic adventures at Stanford University. It was here that Rajan decided to take up teaching, instructing undergraduate students on the intricacies of calculus. He received a master’s degree in mathematics in 1984. While at Stanford, he enjoyed hiking, sailing in the San Francisco Bay and exploring the surrounding regions of northern California.

The California sunshine, however, was not enough to keep him away from his family back east. Rajan moved to New York and began what would be a storybook journey through the world of investment banking, starting first at J.P. Morgan, then with Morgan Stanley, working primarily in fixed income derivatives and structured arbitrage. He left Morgan Stanley in 2001 as a managing director.

“We sat elbow-to-elbow for three years. Travelled together. Pulled all-nighters together. Through all our time together, Raj shared his laid-back enthusiasm and a unique perspective on business and on life,” said Chris Harvey, Chief Executive Officer of JP Morgan Securities. “He had the pragmatic insight to see things as they are and an optimism for what we could make of them. Being around Raj was great for the head and the heart. There is no one I would rather be stuck in an airport with.”

It was a warm summer evening in 1994 when Rajan met his wife, Anna, in a restaurant on Grand Street in SoHo. Straight from a classic romance movie, Rajan proposed to her six years later at a resort in Tunisia, North Africa. They were married on June 23, 2000, in two ceremonies: one at the Ganesh Temple in Queens, N.Y., and the other at Lyndhurst in Tarrytown, N.Y. Next month, Rajan and Anna would have celebrated their 20th wedding anniversary.

For all the good New York had brought to both Rajan and Anna, including the birth of their two sons, Doran and Janak, it was the tragedy of 9/11 that prompted Rajan to move his family to Weston. It was there he began a new chapter in his life, focusing on raising his boys, nurturing their intellects, helping them explore the world and instilling in them the values of compassion, conservation, and his trademark ‘living in the moment.’ Rajan was a guide for his sons right up until the day he died.

Through the journey of parenting, he had an incredible partner in his beloved wife Anna. Rajan continually emphasized the need to work as a team in raising their children. That shared goal was the thread which bound them tightly together, making them better parents and people. This was keenly felt in the Weston community where Rajan was involved in the Weston Public Schools, as well as a fixture at his sons’ sports events.

You could always find him on the sidelines, cheering on Doran and Janak even more loudly than he cheered when the Washington Nationals won the World Series in 2019. It was during these parenting years Rajan found the most connections with his family, his community, and the adventure that was his life.

“Raj was an innate problem solver and had a wonderful sense of humor; our conversations were always filled with laughter and common purpose,” said Meg Sullivan, Guidance Counselor at Weston High School.

Due to COVID-19, services have been limited to immediate family. When it is safe to do so, the family will host a private event to celebrate Rajan’s life. In the meantime, donations in the memory of Rajan’s life can be made to the Connecticut Food Bank, The Nature Conservancy, or The Inner-City Foundation for Charity & Education.