Board of Finance Leans Toward Zero 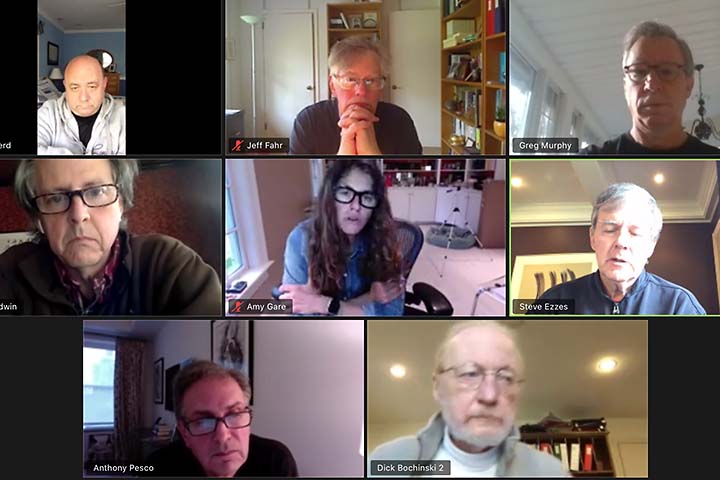 The prevailing inclination of a majority of the Board of Finance appears to be to leave the mill rate unchanged this year by adopting a combination of cuts to budgets for operating Weston schools and the Town, capital items, and drawing some amount from reserves.

The Board met last Thursday evening, intends to resume deliberations on May 21, and plans to vote on June 1.

The meeting on May 7 was originally scheduled for a final vote, but was repurposed to give Board members an opportunity to gather more information. It began with the question of how much is being saved as a result of Town and school facilities being closed for several weeks.

Phillip Cross, the school district's finance director, told Board members that the district will have a net savings of about $550,000 from the schools closure, with more possibly to be realized, now that it is certain schools will not reopen this academic year.

Rick Darling, the Town's finance director, estimates that the Town will come in about $190,000 under budget, roughly half due to little being needed this year for snow removal, but cautioned that police overtime may run slightly over budget.

Dr. Spaulding also hailed police Sergeant Joe Miceli, the director of Weston's Office of Emergency Management, who remained at his post while suffering the disease and quarantined.

How to use the savings

Combined, the school district and Town savings could provide just about what would be needed, even at proposed budget levels, to bring mill rate growth to zero, especially if more savings are found. But a majority of the Board appears to want to set those funds aside and still make cuts.

The thinking is that the school district will need the money, subject to need-by-need Board approval, as and if classroom instruction resumes in the fall.

The odds are that resuming classroom instruction will be a complex process in fits and starts, possibly with staggered start times, smaller classes, an extensive cleaning and disinfecting cycle, and some mix of classroom and distance learning, which could vary by schools and grades. It is likely to be expensive.

The budgets currently proposed would result in a 1.39 percent mill rate increase, an estimated add of about $18 per month to the tax bill of the average home. Reducing the increase to zero appears to be the priority for most members of the Board, even if it requires cuts to budgets that have already been scaled back over the course of months.

The financial impact of the COVID-19 crisis on Weston residents obviously weighs heavily on the minds of Board of Finance members.

Board member Jeffrey Farr cited an estimate from the Town Administrator that 400 citizens have filed for unemployment. That number may be low. We know of freelancers who are trying to file, now that they can. But they are having difficulty getting applications processed.

A New York Times article last week titled "Time to Get Out of Dodge" featured Weston prominently, explaining why suburban and rural living is suddenly appealing to city dwellers.

We also heard a direct example last week from a longtime resident who sold his house this month and was amazed by how many New Yorkers had a strong interest in the property.

Dr. Spaulding tells us he attended a meeting on Monday morning of 85 members of the Mid-Fairfield County Association of Realtors. "Weston is hot," said one. An analysis shows inventory down 20 percent and average sale prices rising. Dr. Spaulding said he offered to speak with clients if agents think it would help, and some took him up on it immediately.

If you were a product manager selling Weston, setting aside the circumstances, you would be elated right now. Some of your product's perceived weaknesses have become strengths. And you still have the strengths you had before: a beautiful town, nature and wildlife in abundance, and great schools.

Where to cut? From the Town?

The First Selectman essentially told the Board of Finance that the Town's operating budget request was as lean as possible from the start, was later reduced when savings were either found or forced, and that he cannot, in good conscience, recommend additional reductions that would affect core Town services.

"I need to make sure we come back, after this [the COVID-19 crisis], to a town that is essentially the same as people left," he said.

Dr. Spaulding took exception to an implication that the Town's budget showed insufficient compassion for residents who may be hurting.

"To say that we are not compassionate about the people who are impacted is a ridiculous statement," he said. "I think about them 24 hours a day. All that's on my mind is the health of this town."

The Board seemed interested in possibly deferring a few capital items and save about $300,000. This year. "Deferring" means they would be back next year. Maybe.

Items possibly on the block include an installment for part of the Town's cost to repair a bridge on Michaels Way (mostly paid for by the State, a project at least two years away), a dump truck, part of the cost of improving the Onion Barn, and replacement of breathing apparatus used by the Weston Volunteer Fire Department.

One or two members of the Board of Finance continue to ask Board of Education chair Tony Pesco for a view of what it would take to get to a flat budget. The school board developed that view months ago. After a series of sometimes torturous workshops, they met to vote a final budget request and referred to a list of color-coded potential reductions.

Items in red were taken off the table, as they "touched the classroom" too directly. Since then, the district has reduced central office staff and two senior "cabinet level" administrators and found savings in other areas.

When Dr. Pesco was asked again a few weeks ago what would be cut to get to a flat budget, he answered: "Teachers."

On Thursday evening, Dr. Pesco was asked whether two job positions were dispensable: Library Media Specialists and Curriculum Instruction Leaders. The latter are teachers who, in half their time, assist, train, and develop other teachers.

The Board of Education had considered, many times, whether the number of these positions could be trimmed. They were dissuaded by the school principals. Of the many things principals said they could live without, these positions, they said, are vital.

Superintendent William McKersie said If they were eliminated, "distance learning would be dead." He explained the roles and work, and said many districts in the region, state, and country are far behind Weston in implementing distance learning.

The district's initial rollout of distance learning was put together in a couple of weeks, started out fairly modestly, but has since developed into a respectable interactive experience that shows what can eventually be accomplished with the technology.

Implementing a full distance learning curriculum is an enormously complex, labor-intense undertaking, one that requires special training, skills, infrastructure, and a different approach to instructional design. It doesn't come cheap, but the mode is here to stay. As Assistant Superintendent Kenneth Craw put it to the Board of Education months ago, we may never need a snow day again. Not that it snows anymore.

Governor Lamont and Education Commissioner Miguel Cardona are confident that hybrid learning—a mix of classroom and online teaching—will be a permanent and beneficial feature of Connecticut education. Whether State funds will be available to help districts implement it—especially in districts like Weston, which rank at the bottom of the needs scale—is a question.

There are no simple solutions. When one Finance Board member casually said "I think more can be done" on reducing the school budget, Dr. Pesco asked, "Where? We're digging into every line item," and said he was open to ideas. None were offered.

Another member asked why the Town and school district employees couldn't be gathered into a gym (which you can't do right now anyway) and asked to voluntarily give up two percent of their salaries. He said he knew the answer, but member Richard Bochinski, who has experience in the matter, explained why it couldn't be done, with examples of how it had been tried and failed. He ended with, "it's a great idea, but I think you're dreaming."

A sense of the Board

Board chairman Steve Ezzes asked each member to sum up their thinking at this point. It wasn't a vote. Responses were similar in some cases but a mixed bag in others.

Mr. Farr said he favors no mill rate increase, a mix of cuts to the operating and capital budgets, and a draw from reserves as a last resort. Rone Baldwin's views are roughly in line with that, although he appears more willing to draw from reserves, whereas in the past he has been perhaps the member most reluctant to do so. Allan Grauberd favors a zero-growth mill rate but no budget cuts, preferring to deploy funds from current year savings. "I don't want to underinvest in town," he said.

Amy Gare strongly favors the budgets as proposed and is content with a small mill rate increase. She reminded colleagues that the Town Survey proves that 75 percent of residents moved to town for the schools and that 70 percent of the emails received by the Board expressed support for the proposed budgets and comfort with the mill rate.

Gregory Murphy said, "I don't agree that the survey is a real reflection of what people want." But Ms. Gare had only referred to a question about why people moved here. It seems unlikely that has changed. Mr. Murphy said he wants flat budgets and no growth on the mill rate. But that can't be done. As Mr. Baldwin and Mr. Bochinski pointed out earlier, flat budgets would produce a negative mill rate increase.

Mr. Bochinski said his views had evolved toward a flat mill rate hike. "I've learned a lot about how much damage has been done financially to a lot of people in town," he said. "I didn't count emails. I looked at quality…not quantity. And I saw there really was a lot of hurt and concern."

We can say the quality of emails received by the Board doesn't strike us as terribly different on either side of the argument. Some are as short as one line, some much more developed, some clearly cut and pastes from boilerplates, and so on.

Mr. Ezzes appears to want a flat mill rate or "as close to it as possible," and seems to prefer the mix of operating and capital budget cuts plus a "rational number from reserves."

Mr. Ezzes said he was most concerned about the future. "This pandemic will get worse," he said, "and you're underestimating the future expense of it. We're not going back to any sense of normality for a year."

He is particularly concerned about unemployment. "This isn't like 2008," he said. "Not even close."

Earlier, he had said ongoing developments and additional guidance from Hartford weeks from now are most likely to indicate "we didn't budget enough."

Editor's Note: Shortly after initial publication, we learned that Mike Rizzo, the school district's Assistant Superintendent of Pupil Personnel Services and Special Education, is the third senior administrator to leave the district this year. Mr. Rizzo has accepted the same position in Westport. 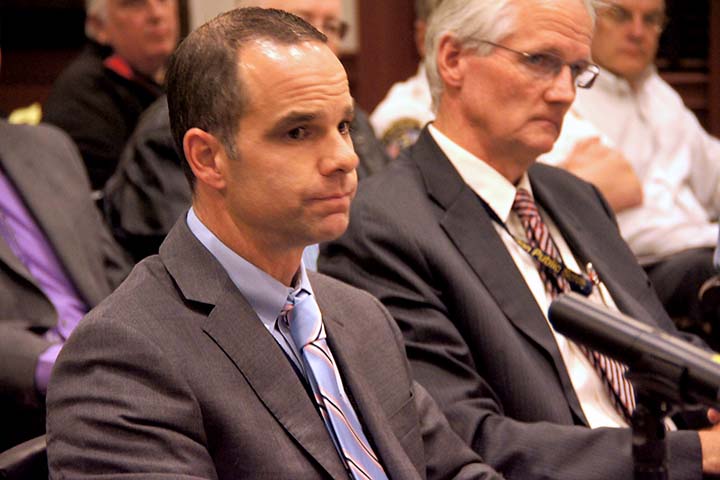