Finance Board Budget Deliberations to Continue 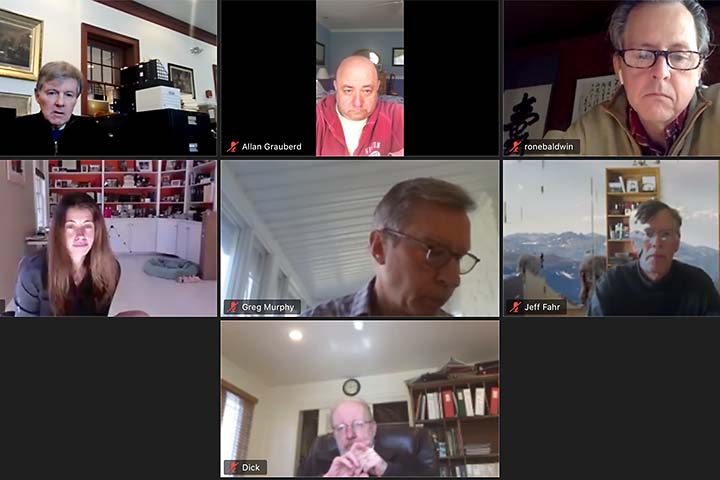 Screen shot: Board of Finance members

Editor's Note, May 6, 2020: This article has been revised since original publication to reflect a change in the Board of Finance plans. Instead of meeting to set budgets and the mill rate on May 7, as originally intended, the Board will continue deliberations on May 7 and make decisions later in the month.

The three-hour Board of Finance online public budget hearing on Saturday, May 2, was remarkable in several respects.

The task of approving budgets for the Town, school district, and capital items now falls entirely to the Board of Finance. The Board will continue deliberations in a virtual meeting on Thursday evening, May 7, and meet later in the month to vote.

This unusual arrangement is a result of social distancing brought on by COVID-19 and executive orders by Governor Ned Lamont, which required the Board of Selectmen to authorize the Board of Finance to hear from the public, set budgets and the mill rate, and do so without an Annual Town Budget Meeting and referendum.

According to Finance Board chairman Steve Ezzes, who opened Saturday's online hearing by explaining the budget approval process and why it must be done this way, more than 130 citizens participated in the session.

That number happens to be the quorum for an ATBM, a threshold that is almost never met. Participants were given three minutes to ask questions or, as in most cases, to state their views. There were few technical glitches, all minor. The discourse was polite and respectful.

A sense of the town?

In rough numbers, about 40 members of the public spoke. Comments tended to fall into two categories: those who want budgets and the mill rate to remain flat, and those who approve of the budgets as proposed. Barring unusual action by the Board of Finance, those budgets would result in a 1.39 percent mill rate increase.

About 30 percent of the commenters favored a zero-percent budget and mill rate increase. The remaining 70 percent were happy with what is proposed. That split is about where a referendum vote normally comes in. There will be no telling that it would have gone that way again.

Where a reduction would hit

It is also impossible to predict what final action the Finance Board will eventually take, although one member stated his support of no growth even before hearing from the public.

In a Board meeting several weeks ago, members asked the Town's Finance Director, Rick Darling, how much would have to be cut to get down to zero. Mr. Darling said it would take $1 million in reductions between the Town and the school district budgets.

First Selectman Chris Spaulding and Board of Education chairman Tony Pesco were asked what cuts would have to be made to reach $1 million in reductions.