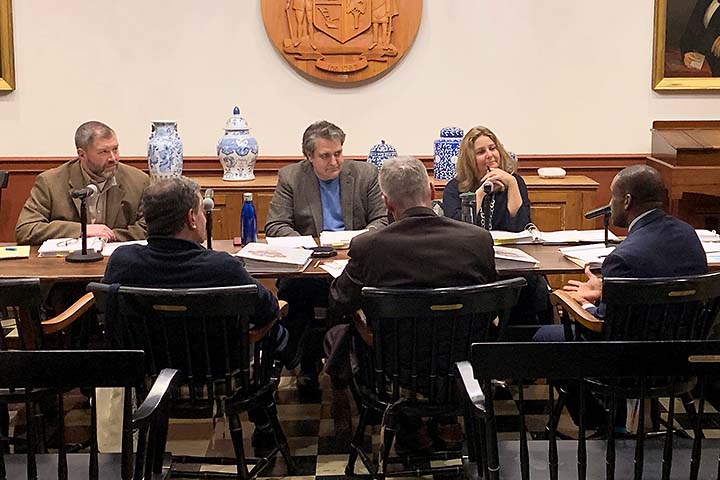 When the Board of Finance begins budget deliberations next week, members will consider an education request transmitted by the Board of Selectmen with a recommendation that it be reduced.

In two meetings this month, the Selectmen, Board of Education chair, and school district officials examined the schools budget request in detail, found some savings, identified areas where savings may be achieved, and probed deeply—sometimes sharply—into transportation costs that rise far more than hoped and expected.

On February 11, before diving into details, the discussion centered around how the entire budgeting process needs to change. It began with a question from First Selectman Chris Spaulding. Budgets rising faster than the cost of living are "not sustainable," he said, and asked, "What's the strategy for bending the curve?"

Board of Education chair Tony Pesco said the initial district request for a 5.55 percent operating budget increase (since reduced) was "an eye-opener." He said it made clear that a budget process is needed that can anticipate costs over several years.

Without a longer view, said Dr. Pesco, "Next year, we will have to do the same thing…peeling back to gain efficiencies…getting closer to the untouchables" of programs and class sizes, "always chipping away at the edges."

The question, said Dr. Pesco, is "how to deliver education that is affordable, but with the quality citizens want."

Superintendent William McKersie said the school district's planning has always been a five-step process: focus on the mission of producing "global citizens," determine the work that is needed, identify who will do it, and calculate the cost. He said costs are virtually certain to grow about three percent each year.

"Only under your current operating scenario," said Dr. Spaulding. 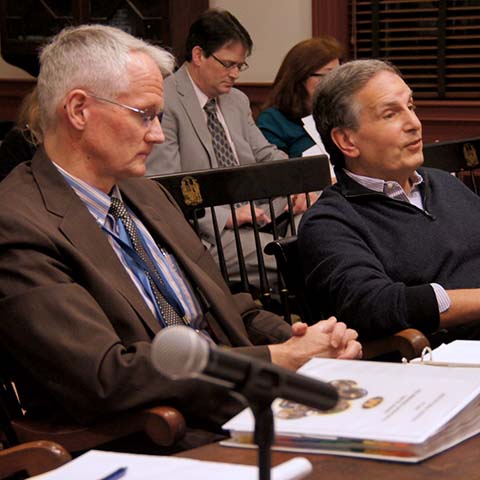 Dr. Pesco said the education budget process needs to change to a "top-down" approach, starting "with a sense of affordability first." He added that it would "force answering structural questions" about how the district operates.

Dr. McKersie seemed to agree. "Maybe Weston is at a point where we turn that around," he said, and suggested that perhaps the first question should be "what can Weston afford?" He said there would always be "a back and forth" about school spending, but that "maybe we can contain it a little better with some guidance town-wide." He pointed out that such a shift is properly the role of the Board of Education, not the administration.

The First Selectman said he expects the Board of Finance to provide guidance right away. Going forward, Town Administrator Jonathan Luiz suggested a system where the boards of Selectmen, Education, and Finance work jointly year-around, planning the school district's priorities, fiscal needs, and structure.

On February 20, school district officials came back to the Selectmen with more information, some of which is still being sorted.

Like the Town, the Board of Education faces sharp increases in medical insurance next year, and probably in years ahead. In budget workshops, a consensus seemed to emerge among Board members that a decision made three years ago to join the State Partnership Plan should be revisited. 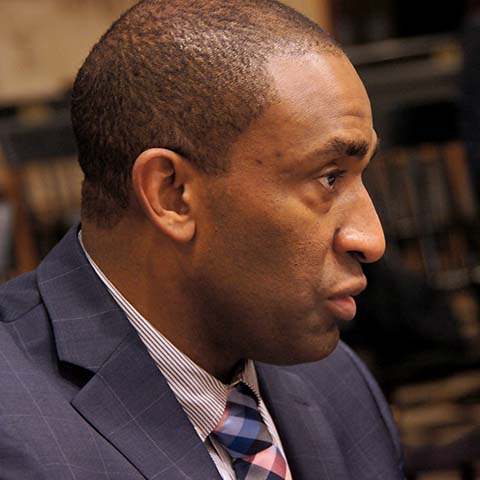 The district saved a considerable amount of money in the first year of that coverage, but since then has seen costs rise. Next year, premiums will increase by 10 percent. At the moment, a return to a self-insured model does not appear to be a fiscally-viable option, according to district Finance Director Phillip Cross.

The Town tackled the problem by joining a consortium of other municipalities. Its premiums will only increase five percent next year, and cannot rise by more than eight percent the year after.

In the previous meeting, the Selectmen urged the district to explore joining the consortium. The savings could be substantial. A reduction in that one item, Dr. Spaulding pointed out, could completely offset the entire amount of the Town's operating budget increase.

At this writing, based on what Mr. Cross told the Selectmen, joining the consortium appears to be possible, but it is not immediately clear that the district could achieve the same level of savings as the Town. It seems likely Mr. Cross will have additional insight to provide the Board of Finance next week.

Unanticipated special education needs, especially out-of-district placements, are the wild card in budgeting for almost all school districts. In Weston, investments were made two years ago to control costs by better anticipating needs and meeting them as much as possible in-district. It was acknowledged at the time that it could take two or three years to see results.

Results seem to be appearing. The budget surprise this year is far less severe than before. "The curve has at least flattened," said Dr. Spaulding.

The exception is costs for special education transportation and, to an extent, general transportation as well. Those costs have risen by hundreds of thousands, for reasons not yet fully explained. The picture is complicated by an awkward transition last year to outsourced transportation.

Selectwoman Samantha Nestor came to the February 20 meeting with a ream of documents about transportation costs and a number of questions. She also came apparently unwilling to accept casual assurances that the district has the matter under control. "I don't want to be handled," she told Dr. McKersie.

As of the 20th, Mr. Cross, who is new to the district, was still completing an analysis of how transportation costs apparently spun out of control. It seems likely the Board of Finance will be interested.

For Ms. Nestor, the numbers simply didn't add up. She said budget figures in a document used by a school board committee when first considering transportation outsourcing didn't match the budget approved by voters weeks before. Figures in that document, she said, didn't square with numbers in material used later by the full school board. She said numbers in this year's budget request showing last year's actuals didn't match either.

"I'm sympathetic to the transition last year," said Ms. Nestor. "But I'm having a difficult time comparing apples to apples." Some of her concerns appeared to be alleviated by data prepared by Mr. Cross, but not all, especially when it came to questions about the true cost of salaries and benefits once paid to drivers versus the true cost of outsourcing. She said the disposition of buses the district either leases or owns is equally unclear.

"We are having conversations about laying off teachers, closing sections, and making class sizes larger," said Ms. Nestor. "This is a lot of money."

Dr. McKersie said, "None of us are satisfied with this overrun. We need to go back and true up the real costs…and see if this was a good move."

At the very least, it seems clear that the school district, which previously handled special education transportation in-house (and received revenue by providing the service to others) shifted to outsourcing based on estimates, possibly faulty, of cost savings. Actual costs were higher than projected, and the district took on more needs than expected, sometimes involving long travel routes. In budget workshops in January, members of the Board of Education seemed to agree that a fresh look should be taken at the outsourcing decision.

By the end of the meeting, in addition to urging school district officials to continue pursuing the possibility of joining the health insurance consortium, the Selectmen recommended that the district sell two school buses that seem to be unneeded, which could bring in about $50,000. 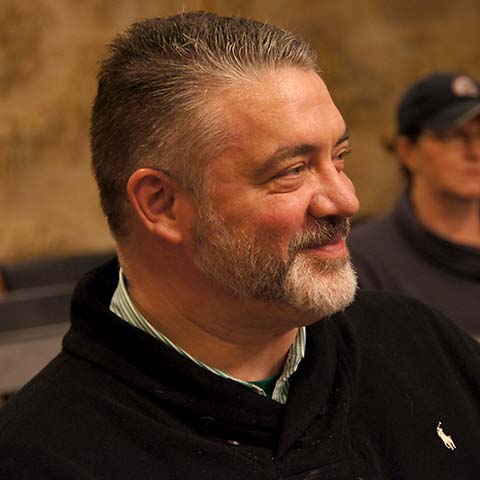 The Board was pleased to hear from the district's IT director, Craig Tunks, that about $37,000 could be saved, as the First Selectman had previously suggested, from a transition to open source software used for non-instructional purposes. Dr. Tunks said examining other open source options would continue.

The Selectmen, who have no formal say on the education budget other than to pass it along to the Board of Finance with or without a recommendation, chose to include a recommendation this time: that the Board of Education anticipate a budget increase no greater than 2.5 percent.

This appears to be based on Dr. Spaulding's "impression that you're not getting out of there [the finance board] with more than 2.5 percent."

The school board's current request calls for a 2.89 percent increase. Savings found by Dr. Tunks, plus the possible sale of vehicles, would bring it down some. Getting to 2.5 would mean cutting about $176,000 more.

The Town's budget request goes to the Board of Finance on March 2, followed by the Board of Education's request on March 4. The finance board holds a public hearing on both on March 24. On April 7, the Board decides what to put before voters at the Annual Town Budget Meeting on April 22.