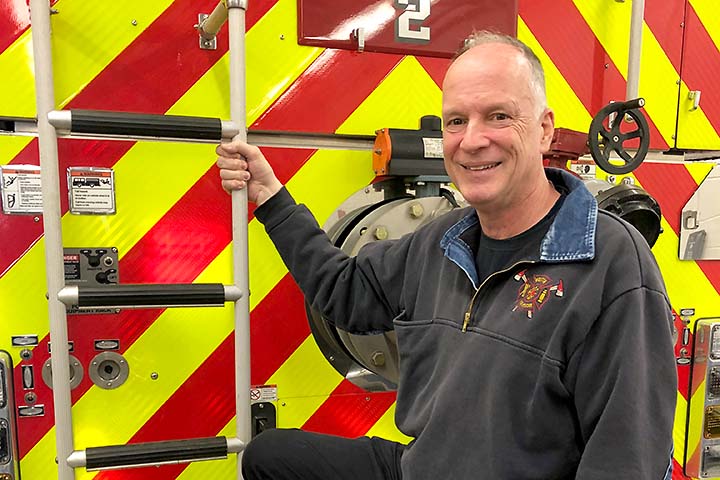 As an eight year-old boy, John Pokorny enjoyed jumping on a fire truck with his father, a Weston Volunteer Fire Department captain. Since 1996, Mr. Pokorny has led the department, a force of 70 well-trained volunteers who respond to about 550 emergencies every year.

Mr. Pokorny grew up in Weston, and joined the Volunteer Fire Department as soon as he was eligible at the age of 16. His father, Charles, had joined in 1950, and served until he passed away in 2000.

Weston currently has a full roster of volunteer firefighters. "We have 17 new guys," said Chief Pokorny. "Many of our new volunteers have jobs that enable them to work from home. They are in their thirties and have kids in school, so they are nearby to go on fire calls."

At the moment, the department has no women volunteers, though many have stepped up in the past, including the late Susan Hutchinson, a former Weston First Selectwoman. Lyette Segerdahl, who served for two decades, retired from the department last year.

With an influx of new members, the average age of Weston firefighters is 45. It's often a family affair, with a number of father-son (or sons) volunteers serving together now and over the years.

It's not an easy job. 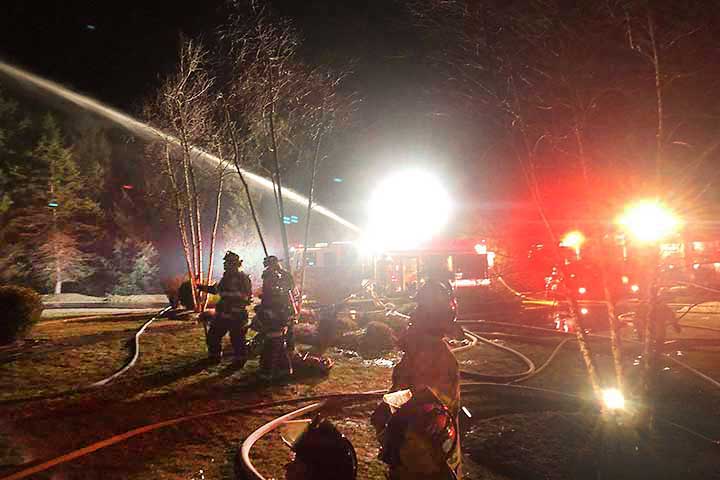 To become a Weston volunteer firefighter, you must be at least 18 years of age, hold a high school diploma, and pass a physical exam and background check. It also requires a big commitment of time for training, including a Firefighter Training I course. About 80 percent of Weston’s volunteers also take an advanced Firefighter II course. All new volunteers are required to complete a minimum of 110 hours of training. Many classes take place at Firehouse No. 1 on Norfield Road and at the Transfer Station.

Other training occurs at a state-of-the-art facility, a new school at an old Nike missile site in Fairfield. The Joseph Elias Fire Training Center brings together the best instructors in Fairfield County and beyond to support emergency services.

The school has 14,000 square feet of classrooms and a three-bay apparatus building. It also has a four-story, 5,400 square foot "burn building" that allows firefighters to train inside, including for rope rescue work. Everything is designed to enhance a firefighter’s skills by training in realistic fire scenarios.

Some firefighters also have basic EMT certification, and train using "the jaws of life" on old donated cars. The chief said, "newer cars are a lot stronger with all of the added safety features," and that steel in Teslas and other new models requires keeping tools updated to cut through ultra-high-strength material.

When a 911 fire call comes in, dispatchers alert volunteers, who report to the fire station. "Any fire incident always requires safety first," said Chief Pokorny. "The severity of their work at the scene requires trust and clear communications to work as a team to put the fire out.”

Firefighters suit up with a lot of weight on their bodies. Basic equipment includes a 6-pound helmet, a 27-pound breathing apparatus, and a 4-pound light. Boots, pants, coat, gloves, and an air pick and radio add about 22 more pounds. Carry a set of irons and an axe, and the load is about 75 pounds.

At the scene, Chief Pokorny said, "Water supply is the biggest challenge, because there are no fire hydrants in town."

There are dry hydrants in Weston, non-pressurized pipe systems that draw from lakes and ponds, but fire engines must always arrive at the scene with, combined, about 4,500 gallons of water in their tanks. “We always keep Fire Engine No. 1 ready at the station in case of another fire incident," said the chief.

Fires in the home

Most of the 550 incidents WVFD responds to each year are electrical issues, house fires, and car accidents.

"Most serious fires are caused by ashes from a fireplace that are not completely out," said Chief Pokorny. "People dump ashes into plastic garbage bins on the side of the house. A fire starts in the garbage bin, heats up the side of the house, and that gets under the roof and into the attic." He advises everyone to put fireplace ashes away from the house in a metal bucket with a lid.

Other fires are caused by damaged power strips and heating equipment that is not serviced every year.

Mr. Pokorny is responsible for managing the WVFD, working with all public services in the community, coordinating with State agencies, and always representing the 70 volunteers to maintain a committed, positive team spirit. The real-life experiences shared by firefighters create strong personal bonds. “We do awesome work together,’ said the chief.

The Weston Volunteer Fire Department is a 501(c)(3) nonprofit membership corporation. The average cost to outfit a firefighter is $2,000 for personal gear. Volunteers can buy into the town’s health insurance.

The organization accepts donations to bridge the gap of costs not covered by the Town budget. Each year, two fundraising mail requests are sent to Weston homes.

Learn more about the WVFD on the web. 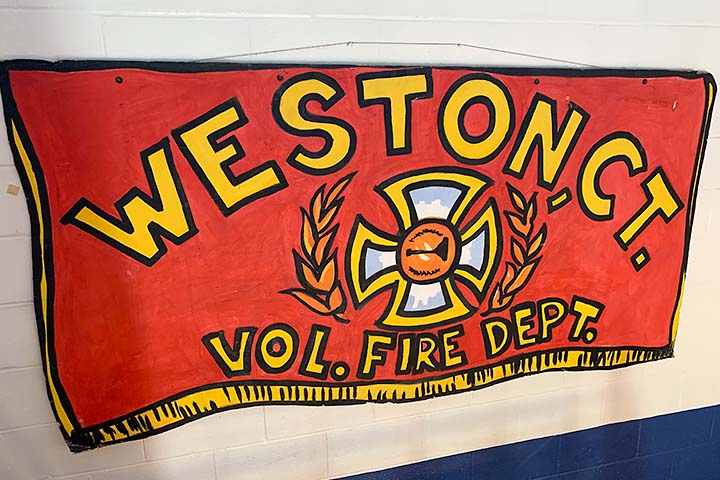 Mural at Firehouse No. 1, by Dick Maccabe.