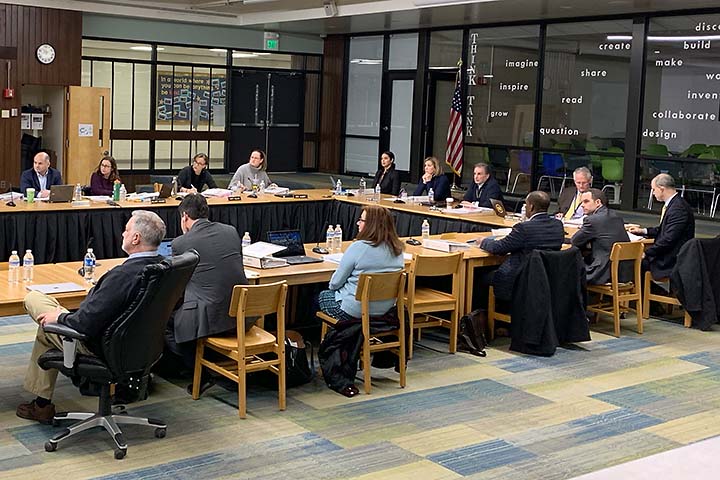 On Thursday evening, the Board of Education approved an operating budget that increases 2.89 percent over current year spending. A revised set of proposed capital expenditures was also approved.

The Board signaled an intention to seek additional savings before the budget is taken up by the Board of Finance in March, with an apparent focus on the district's administrative structure, possibly extending into a reduction of positions at the most senior levels.

Members evaluated potential cuts of items drawn from two scenarios prepared by the administration at the Board's request. Superintendent William McKersie made clear that the scenarios contained options, not recommendations.

For the most part, the Board avoided reductions that directly affect classroom instruction, but in some cases did so by only one or two degrees of separation.

Technology took the biggest hit, with a $240,000 reduction, sparing only a $7,000 allocation for instructional software. The decision essentially defers a considerable amount of hardware replacement into future budgets.

The Board also deferred creating a director of counseling position, which would allow extending college preparation programs into the middle school.

Closer to the Classroom

The Board approved funds to restore the theater coordinator to a fractional (.2) full-time-equivalent (FTE) position. It had been that way until last year, when payment was changed to a stipend for various reasons. For other reasons, the change didn't work out very well. At the net-net level, the restoration adds relatively minor cost.

The Board did not approve reductions that would have cut math enrichment programs, Project Challenge (a gifted students program), Mock Trial, Robotics, Odyssey of the Mind, debate, and others.

The Board deferred a decision to eliminate a double block of English language arts instruction at Weston Middle School, which is somewhat surprising, because it would save $92,000 and Principal Daniel Doak, who said it would strengthen the school's team model, likes the idea. Assistant Superintendent of curriculum Kenneth Craw does not, and explained his concerns. In the end, the Board decided it should be taken up by the curriculum committee.

Nearly four hours into the meeting, already-made adjustments amounted to a 3.26 percent budget increase. Board chair Tony Pesco asked if members were comfortable with that level and wondered if eliminating two administrative positions "is as deep as we can go?"

The discussion continued for another hour, exploring the cost of the nursing staff, substitutes, overtime, whether Chromebooks were really necessary, the role of assistant directors of special education, insurance, moving the administration offices, and several other matters.

By the end of that time, it was clear the Board wanted to get below 3 percent, but had not identified further reductions. Board member Ruby Hedge asked if Dr. McKersie had suggestions. The superintendent said, "There is nowhere else to go without significant impact to the district," and that further moves were up to the Board.

Member Taffy Miller proposed one: cutting a second central office staff position. Vice chair Melissa Walker agreed that the board should consider ways to "streamline" the administration. Member Victor Escandón agreed with Ms. Walker, saying, "We are trying to build a bridge to the sentiment of the community."

Dr. McKersie argued that deeper cuts would create "a question mark for families deciding where to move," and that a school district without strong leadership would be unattractive to them.

A Reduction to be Named Later

In the end, the Board got to 2.89 by choosing the sword over the scalpel, lopping $175,000 off the budget's line item for salaries. At some point, according to internal counsel Lewis Brey, the administration will have to come back to the Board to approve how that reduction will be applied.

The action produced the budget's only no vote, from member Gina Albert, who was concerned it locks in a cut without knowing what it entails, and that it "may be a reduction you're not happy with."

Dr. Pesco adjourned the nearly 5-½ hour meeting by thanking everyone for their hard work during what was, at times, a grueling process. "This highlights," he said, "that without a structural look it will be the same thing year after year. We have to review how we operate and take a look ahead."

The next stop for the education budget is the Board of Selectmen, who review it on February 11 and offer their thoughts. The capital budget is eventually consolidated with the Town's requests. The Board of Finance begins its review on March 4, and holds a public hearing later in the month.