Speak Up on February 8 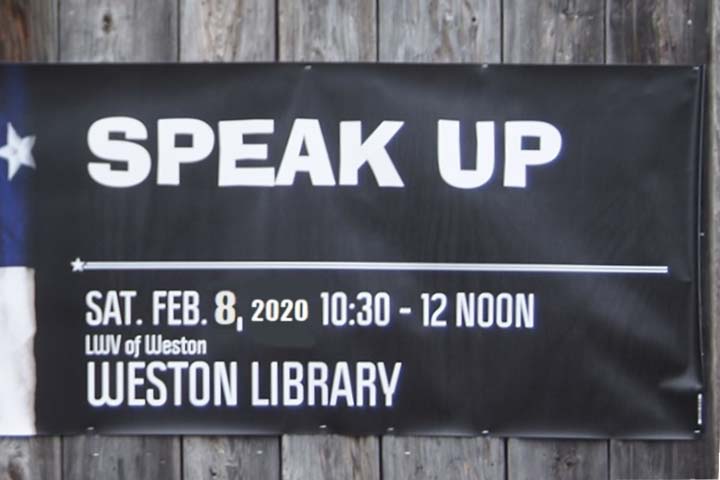 On February 8, the annual community Speak Up event takes place in the morning at the Weston Public Library Community Room. It starts at 10:30 and runs until noon.

This is the 29th Speak Up, which is conducted by the League of Women Voters, who supply free coffee and donut holes. (Leave some of the latter for the press.) Weston's Selectmen and state legislators will be there, as will most senior Town officials and the chairs of major commissions and committees. All are there to hear your comments and answer questions.

Last year's conversation ranged from a discussion about proposed school district consolidation (an idea later abandoned) to concerns about an intersection residents consider unsafe. In between were comments about State proposals (also later abandoned) to transfer costs to towns while taking away revenue, thoughts about home values, making the town "sticky," commercial zoning, and the fate of the bus depot.

Several of last year's topics are still open questions. A proposed Constitutional amendment to allow early voting passed, but not by enough to get on the ballot until another vote is taken in the legislature. Issues for seniors remain, including the status of the Senior Activities Center. The school district is still looking at possibly changing start times, and the heavy lifting of deciding how many schools are needed in town — and how to optimize use of school and Town facilities — is only now about to begin.

And then there are budgets. By the time of Speak Up, the Board of Education will have approved a proposed budget and the Town's initial budget request will be known. But neither will have yet been presented to the Board of Finance, and neither will be acted on by the public until April.